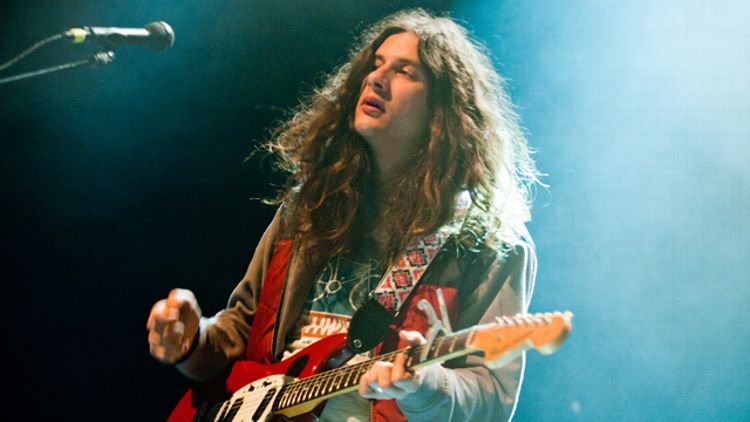 Kurt Vile looks the way his music sounds. Modestly built with weary yet intense eyes obscured by long tangles of stoner-guy locks, he’s a walking mumblecore redux of classic rock. Vile’s excellent 2011 album Smoke Ring for My Halo, his breakout release and fourth overall, begins with a middle-of-the-night ballad called “Baby’s Arms,” where the Philadelphia native talk-sings over desolate guitar-picking and storm clouds of disembodied ambient noise about the sanctity of his baby’s arms. Vile dispenses with lyrical cleverness; his songs are about whatever the titles say they’re about. (Disappointing exception: The new Wakin on a Pretty Daze includes a track called “Air Bud,” where the reference to the sporty canine film franchise is a nonsequitur.) Vile’s songwriting specialty is plausibly articulating the inarticulate inner monologue of a young, sensitive American male; he feels as deeply as Ryan Gosling in The Notebook, but he’s just a regular guy, and doesn’t have the luxury of Nicholas Sparks turning those feelings into best-selling prose. So Vile repeats the same words a lot. He trails off. (Ellipses show up frequently in his lyrics. Ellipses are the point of his lyrics.) He digs his fists into his jean pockets in search of the right phrase to sum up what’s in his head and, miraculously, finds it: “I get sick of just about everyone / and I hide in my baby’s arms” is the definitive Kurt Vile sentiment, a snapshot of alienation given a brief respite.

A former forklift driver who’s now an indie star with a wife and two young daughters — he licensed “Baby’s Arms” for a bank commercial a few years back so he could afford “high-end diapers” — Vile knows something about being accepted without ever truly belonging. Wakin on a Pretty Daze (which is out next week, though you can listen to it here), is hardly the sort of record that cool-kid types seem likely to embrace in 2013. At a time when the most heralded indie music is drawing from chart pop, EDM, and R&B, Vile remains staunchly committed to the traditional rock-band format. He’s been likened to Tom Petty and Pavement, though that has more to do with the spirit of his songs — which mix oddball experiments with FM melodies — than their actual sound. On Wakin, the guitar tones are situated in an idiosyncratic, previously unexplored middle ground between Crazy Horse, Dire Straits, and Sting’s Nothing Like the Sun. And there are a lot of those tones — several tracks approach or surpass the 10-minute mark, due to generously extended passages where the guitars don’t solo so much as meander subliminally, the instrumental equivalent of Vile’s laconic vocals.

Before I heard the rest of the record, I was obsessed with the opening track, “Wakin on a Pretty Day,” a twangy, deliberately paced mosey where Vile sings, in highly Kurt Vile-esque fashion, “I’m diggin’ layin’ low, low, low / dig, dig in to these lives that we are livin’ / livin’ low, lackadaisically so.” Not exactly poetry on the page, but Vile delivers his lines with the naturalistic ease of Joe Mantegna breathing life into David Mamet’s tersest utterances. But it’s the song’s second half that’s the star attraction, even if it hardly sounds any more impressive on paper: It’s just a descending guitar line with some medium-impressive solos played over it. But Vile works his lack of technical skill like a virtuoso. Unlike the typical guitar hero, his playing doesn’t blast outward; it slowly worms inward. On “Girl Called Alex,” two or three guitars bleed in and out of each other, like a 13th Floor Elevators record, because Easter Everywhere is what dudes like Vile play when they’re alone and thinking about some girl they knew once. Wakin on a Pretty Daze is a defiantly solitary record; it’s made for playing in the car when you’re driving past the house where you grew up, or where the first person you ever loved once lived. It evokes a sweet melancholy you can’t resist marinating in, so long as the blurred, sluggishly driving music never stops bounding erratically forward.

In a recent interview with the Guardian, Vile said that Wakin on a Pretty Daze, as opposed to Smoke Ring, is “just 100 percent my voice all the time.” The story suggests that Vile felt pressure from his label, Matador, to make Smoke Ring more pop-oriented, but I interpret this quote somewhat differently. On Wakin, Vile has taken his affecting fumbling one step forward into full-on musical expressionism. He’s elongated his ellipses as far as they can go, and filled them with squiggles of haze and acres of wide-open space. It’s probably as close to experiencing what the world is like inside Vile’s head next to actually being Kurt Vile.

In my mind, Wakin on a Pretty Daze is a complement to one of my other favorite albums of the year, Waxahatchee’s Cerulean Salt. Like Wakin, Cerulean Salt comes out of a singular Philadelphian’s headspace: Katie Crutchfield writes about her mid-20s existence — the daily drinking, the nightly hookups, the morning-after inventories of the previous day’s mistakes — with an eloquence that Vile doesn’t even attempt to muster. (Favorite lyric from my favorite song: “Won’t you sleep with me / every night for a week / and won’t you just let me / pretend this is the love I need.” I’m 35 and have been happily married for nearly five years, and that still gives me recognition chills.)

Vile and Crutchfield approach similar subject matter from different perspectives and divergent musical voices. Vile is a little older, and trying to put the period that Crutchfield is still living behind him. The most gutting track on Wakin is “Too Hard,” a pledge to not party now that he’s a family man and an admission that following through isn’t always easy. “Life is like a ball of beauty / it makes you wanna just cry / and then you die,” he says, though you really ought to hear how he says it.