Kristen Stewart Didn’t Get Fired From the Snow White Franchise 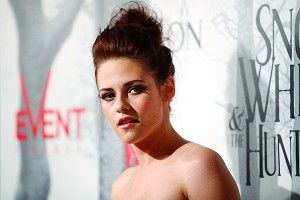 On Tuesday, The Hollywood Reporter wrote that Kristen Stewart would not be brought back for the planned sequel to Snow White and the Huntsman. Since Snow White was directed by her partner in infidelity, Rupert Sanders, and its sequel presumably would be as well, it seemed like everyone involved was avoiding another tabloid mess by not reuniting the dastardly duo. As to why the studio, Universal, wouldn’t just drop Sanders instead, THR pointed out that K-Stew does require one big-ass salary, and that saving those bucks and instead focusing on her co-star/budding movie star/Thor, Chris Hemsworth, could be feasible. (Originally the plan was to make another flick focusing on Snow White, then shift gears for the third installment of the franchise by creating a spinoff for the Huntsman, played by Hemsworth.) THR explained that Universal was now skipping over that theoretical movie no. 2 and going straight to theoretical movie no. 3. But wait! Later in the day the L.A. Times followed up and got Universal to explain that Stewart hadn’t been dropped from the sequel. Yes, the plan had now shifted to a spinoff for the Huntsman, but Stewart “could still be a character in that film, despite reports that suggested otherwise.” Also: Sanders isn’t yet booked for another go-around, although he is on the short list of directors.

OK, so Stewart hasn’t been dropped altogether. But is it crazy to assume it was the scandal that got her Snow White 2 role seriously downsized? That’d be kind of messed up, seeing as the other principals in the greatest love triangle of all time continue to get work. Deadline reports that Universal has acquired 90 Church: The True Story of the Narcotics Squad From Hell for Sanders to direct. As Deadline explains, “The upcoming novel refers to the address of the Federal Bureau of Narcotics when it was formed in New York City to combat organized crime and drug traffic in the mid-1960s through early ’70s. While the FBI refused even to acknowledge organized crime, 30 agents stood alone against a well-organized Mafia and vicious drug cartels.” Dum, dum, dum! Elsewhere, Robert Pattinson has moved from famed iconoclast director David Cronenberg to famed iconoclast director Werner Herzog, signing up to play none other than T.E. Lawrence in Queen of the Desert. The movie is a biopic of Gertrude Bell, who’ll be played by Naomi Watts; Bell is “described as the female Lawrence of Arabia for the impact the English woman had in the Middle East and her work in establishing what would become the modern framework for Jordan and Iraq.”