Justified Season 4, Episode 10: Everyone Wants to ‘Get Drew’ 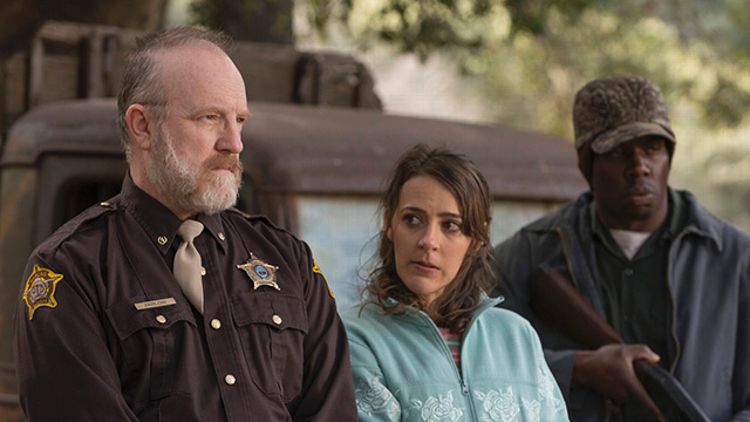 “Get Drew” is the Sesame Street Presents Follow That Bird of Justified episodes, and I mean that largely as a compliment. It’s an episode where everybody pairs off to haul in Drew Thompson (whom I’m going to call “Shelby” in this review for old times’ sake), while Shelby and Ellen May make a break for his escape route. The episode does a surprisingly good job of getting us to a place that’s inevitable — Shelby in U.S. Marshal custody — while making it not seem like an inevitability that we’ll end up there. This is a tough thing to do, particularly in Episode 10 of a 13-episode season, and the end of “Get Drew” sets up some great cliffhangers for everybody going forward. Boyd is out of money and has angered the mob. Johnny has finally succeeded at foiling one of Boyd’s plans. And Raylan and the other marshals have to get Shelby (and themselves) out of Harlan alive.

In terms of structure, this is a “killing time” episode. What I mean by this is that it’s an episode designed to distract us from the fact that nothing much is happening in terms of the master plot. At their best, killing-time episodes are so good at this sleight of hand that the viewer doesn’t really notice just how little actually happened until well after the episode is over. “Get Drew” manages this trick with aplomb, to the point where I didn’t realize how little had gone on in it until my wife asked me for a plot summary an hour or so later. Don’t get me wrong: A lot happens here, but in terms of A-to-B plotting, the episode largely sets up a scenario where the marshals need to get their hands on Shelby, then have him in custody by the end.

So let me get back to that Follow That Bird comparison because I think it illustrates why “Get Drew” works. Follow That Bird, for those of you not schooled in the Sesame Street arts, was the series’ first attempt at big-screen success, released in the mid-’80s. The story involves a social worker who feels that Big Bird needs to live among his own kind with a family of dodos. Big Bird is unhappy among the dodos and runs away from them, at which point our comparisons to “Get Drew” become apt. See, the rest of the Sesame Street gang sees Big Bird’s story on the news — delivered by Kermit the Frog, of course — and they all split off into various vehicles to travel the country and find their feathered friend. (Spoiler alert: They do.)

My point is this: Like “Get Drew,” Follow That Bird has a fairly simple ultimate plot goal, and it needs to distract us from how simple it is with a lot of busy work, like a math student stalling for time by showing every step of a proof. The Sesame Street gang needs to find Big Bird; eventually, they do. How the movie compensates for this relatively weak story overall is to fill the plot with incident and character moments. By splitting the gang into a bunch of smaller groups, filled with characters who bounce off each other well, the movie is able to set up a variety of scenarios that are reasonably diverting for a little kid, if not so much a 32-year-old man who just spent far too long watching Follow That Bird clips on YouTube.

“Get Drew” operates under basically the same principle. There are a lot of incidents, but they’re mostly there to fill time to get from “Shelby’s gone!” to “Shelby’s in custody!” For instance: Shelby and Ellen May take up residence at the holler with Limehouse, who hasn’t been seen since Season 3. The show is banking on the audience saying, “Hey, it’s Limehouse!” because when you actually look at what Limehouse accomplishes for the story, it’s basically nothing. Shelby and Ellen May hide out there, until Limehouse immediately betrays them for a big enough payout from Boyd. (Well, at first he betrays both, then has a change of heart and says it’s going to take $600,000, not $300,000, for Boyd to get both out of the holler.) And it’s not even like it’s all that hard for Boyd to figure out where the two are hiding. He just goes to one of Ellen May’s friends and learns that Ellen May always said she’d hide out in the Holler if worse came to worst. It’s just a thing that happens to keep us distracted from how little is actually going on.

This all sounds like complaining, but I assure you it’s not. I love Follow That Bird, dammit, and I loved “Get Drew,” too. There’s a certain artfulness to this sleight of hand, to distracting the audience from what’s really going on, and “Get Drew” has it in spades. What’s more, I’d defy anyone to get to the end of the episode, to watch those last five minutes, and not want to immediately see next week’s show. The episode, on a plot level, at least, accomplishes its task of keeping things diverting so we don’t get too bored or distracted. I don’t know that anyone’s going to say this is the best Justified episode ever, but the fact that it’s as entertaining as it is, is damned impressive.

What’s more, “Get Drew” also has some really strong character moments. Now that Shelby can be at least somewhat honest about who he really is, he’s fairly open with Ellen May about his backstory and his past, and the episode did a good job of making me want to see Shelby escape and foil both Boyd’s and Raylan’s plans. Shelby’s description of his hoped-for life in Mexico was sweet and poignant, and it hit just the right notes. Do I entirely buy that this guy we’ve known for a couple of seasons is the great and terrible Drew Thompson? Nah. But the show did a good enough job of massaging the story to make this all fit together that I’m not going to complain about it too much.

And if nothing else, “Get Drew” is a reminder that Justified remembers all. I’d been wondering if the show had mostly dropped the rather interesting thread of Johnny wanting to get one over on his cousin and perhaps even kill said cousin. It would be totally understandable, since there’s been a lot going on since Johnny made that deal with Wynn. But the plot’s been rumbling around in the background enough that I was pretty sure it would come to something. And, indeed, the moment when Johnny betrays his cousin by selling out Shelby’s location to the marshals is a potent one, and it comes at exactly the right moment to completely screw Boyd over and leave him in a bind he’ll have to weasel his way out of. (And Boyd’s never so great as when he’s weaseling his way out of something.)

“Get Drew” might not be the world’s most graceful episode, but it’s busy and propulsive and a lot of fun. Plus, it sets things up perfectly for whatever comes in the rest of the season. There are mobsters with helicopters. There are our four favorite marshals together in a vehicle, hoping against hope they can escape alive. There’s Shelby, who’s come close enough to being captured by the Tonins to be scared shitless and ready to talk. And there’s Boyd and Ava, once again way in over their heads. But this time is different. This time, you can tell Boyd is scared shitless, as well, and if something’s got Boyd scared, well, I’m going to be worried, too. I can’t wait for whatever’s next.

Todd VanDerWerff is the TV Editor of The A.V. Club. His writing has also appeared in The Los Angeles Times and Hitfix.