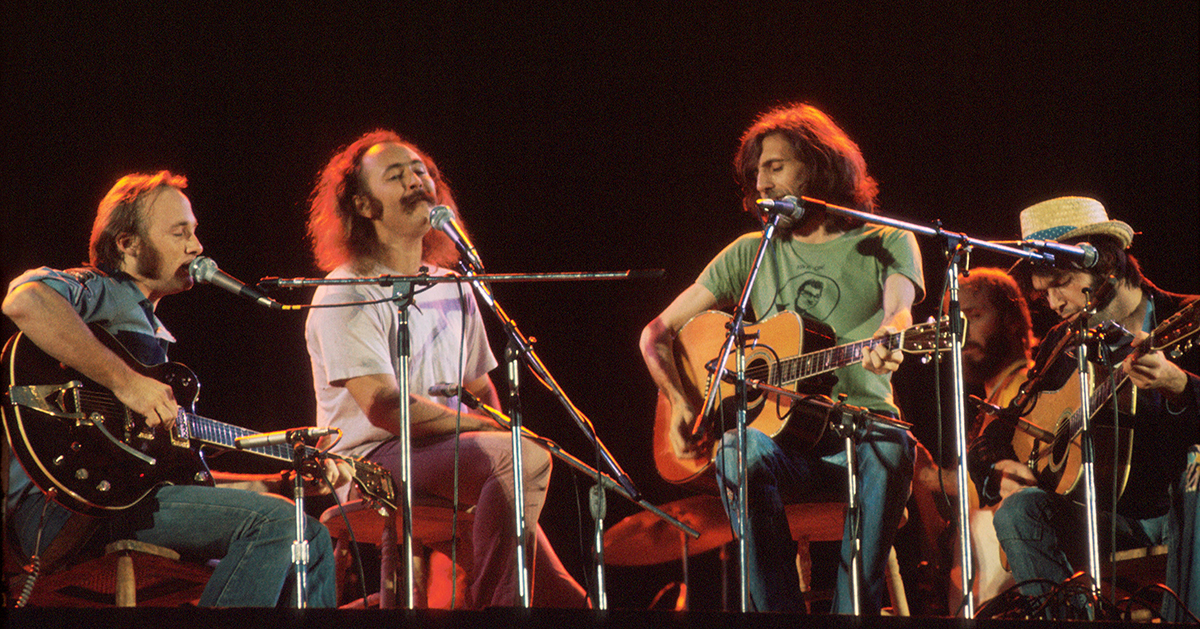 As a serious student of Neil Young, aviator glasses, musicians who wear football jerseys, and rock-related debauchery, I’ve been obsessed lately with the recent CSNY 1974 boxed set. It documents Crosby, Stills, Nash & Young’s infamous Doom Tour, a two-month series of shows in the U.S. and U.K. that became the first large-scale stadium tour in rock history. In retrospect, these concerts are remembered primarily for the backstage excesses of the star consonants — were it not for Brian De Palma making Scarface a decade later, the Doom Tour might still be the go-to cultural signifier for “insanely ostentatious abuse of cocaine by wealthy maniacs.” The music itself has usually been dismissed as bloated and off-key, an all-too-accurate reflection of the band members’ inebriation and greed.

CSNY 1974 attempts to mount a defense for the tour being worthwhile musically by compiling the best performances from several dates and, in many cases, “correcting” those scattershot harmonies. I really love it, though I’m not always sure if I’m hearing the songs or the context for the songs.

With three discs collecting 40 songs (plus a DVD composed of eight performance clips), the boxed set is a predictably bumpy though always fascinating ride. Young comes off great, performing several tunes from his brilliant post-hippie nightmare masterpieces from the period, 1974’s On the Beach and 1975’s Tonight’s the Night, as well as a generous number of new songs not officially available anyplace else. (The most essential being “Pushed It Over the End” and “Traces.”) Young’s bummer odes about the end of his own idealism give CSNY 1974 its self-referential undertow. Hearing him tear through “Revolution Blues” on the Doom Tour is akin to Lou Reed playing “Heroin” while overdosing on heroin.

What I like most about CSNY 1974 is the documentary aspect — everything that was both transcendent and terrible about stadium rock can be traced back to here. Not even the post-production cleanup work can fully obscure how Stephen Stills appears to nearly forget the words to “Blackbird,” or how David Crosby teeters on the edge of falling into a coma while performing a spellbinding version of “The Lee Shore.” CSNY 1974 is basically a mess, but it captures the time with more honesty than I expected.

As far as the performances backstage, the Doom Tour has spun off stories so good they don’t seem like they could possibly be true. To illustrate this, I’ve compiled a 10-question true/false quiz about the Doom Tour, with the answers posted afterward. NO CHEATING!

1. In advance of the concerts, Stephen Stills told Cameron Crowe, in reference to CSNY’s prior tours, “We did one for the art and the music, and one for the chicks. This one’s for the cash.”

2. On this tour CSNY invented the 10-second rule for blow. This occurred one day when they spilled cocaine on the carpet, and responded by getting down on the floor and snorting it off the carpet.

3. Jann Wenner visited the tour’s opening date in Seattle to show his support. David Crosby, high on mescaline, refused to speak to him because he mistook Wenner for disgraced ex-Nixon aide H.R. Haldeman.

4. Bob Dylan showed up backstage at one point and played all the songs from Blood on the Tracks for Stills and bassist Tim Drummond before the album was released. Stills, coked out of his mind, told Dylan the songs weren’t any good.

6. Graham Nash and Stills almost had a fistfight before a show in Milwaukee because Stills had deliberately smoked Nash’s specially rolled “cross joint,” which Nash had been saving all tour for his performance of “Chicago” in Chicago the following month.

7. Drummond once appeared onstage wearing a T-shirt that read, “NO HEAD, NO BACKSTAGE PASS.”

8. Road manager R. Mac Holbert recalled how Crosby would order him to his hotel room and make him discuss business while one of the two girlfriends accompanying Crosby on the tour went down on Crosby.

9. Rock journalist Ben Fong-Torres reported in Rolling Stone that all four band members caught an STD from the same woman in Texas.

10. According to Joni Mitchell, at the tour’s climactic show at Wembley Stadium in London, the band members were doing so much cocaine that they had nosebleeds as they approached the stage.

2. True. (Read about it in Rolling Stone’s recent oral history of the Doom Tour.)

9. As far as I know this is false, because I just made it up, but I suspect it could be true.