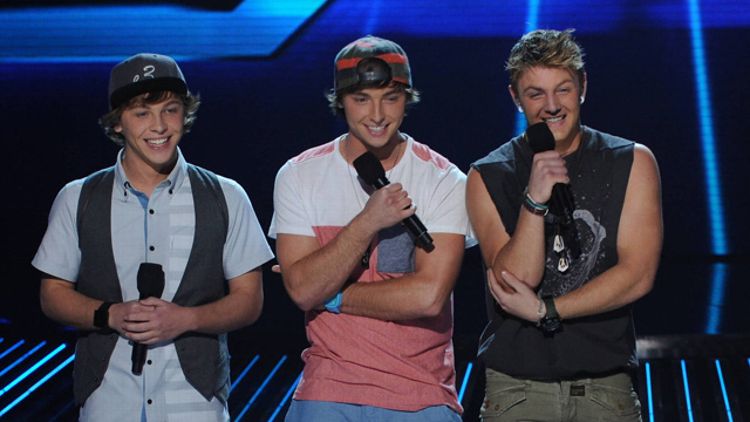 For reasons still not entirely clear to them, Grantland editors Jay Caspian Kang, Mark Lisanti, and Emily Yoshida have decided to track the second season of The X Factor. They now realize the show is never going to end, and they’re slowly coming to terms with their hilarious fate.

Lisanti: Check it out, L.A. Reid wore a cowboy hat! And that is the most interesting thing that happened during either of Tate Stevens’s songs. “We don’t have flashy cars or big mansions,” Tate explains about his social circle’s financial situation. Say good-bye to those old, poor friends, dude. If America keeps voting you no. 1 every week, pretty soon you’re going to have the flashy car, the big mansion, and a gold-plated jackhammer you use to break up your driveway just for fun, and all your former pals are gonna start whispering about how you went “all Blake Shelton” on them overnight. (You should see how many gold-plated jackhammers Blake Shelton has. It’s amazing. Never worked a road crew in his life, he’s just really into jackhammers.)

Yoshida: Demi Lovato is so glad that you can check her Wikipedia page and verify that she is in fact from Texas.

Kang: I can’t decide what was worse: Emblem3 dressing up “Hey Jude” in a rasta hat and a skateboard or when I flipped over to the Hurricane Sandy benefit concert and saw that Mick Jagger had stolen Ruth Bader Ginsburg’s haircut from 1988 and all the zombie makeup from the set of The Walking Dead. Anyway, it’s about time for both Emblem3 and The Rolling Stones to be put out to pasture. It doesn’t help Emblem3 to be restricted by Simon’s glam 1987 Koreatown karaoke-bar taste in music. It’s high time they released their first single: “High Time.” In two weeks, everyone’s going to notice that Stoned Guile doesn’t sing anymore and that his arms aren’t really all that muscle-y.

Yoshida: You would think that it would be kind of inappropriate to do the “nah-nah-nah” hand wave/hip thrust combo during the chorus of a song written for a child going through his parents’ divorce, but for Emblem3 this song is totally about that fly yet melancholy honey on the boardwalk who can write your name on a grain of rice, and who just broke up with that ‘roided-up goober who never really understood that she had a poet’s soul, and whom Stoned Guile is totally gonna set up Kee’un with so he can finally bail out on that bummer of a V card.

Lisanti: It’s just too hard to root against them. They’re so appreciative of everything; Creatine Blondie is like their Gratitude Hype Man, thanking the fans with such sincere ferocity after each performance that you’re afraid he’s going to burst a nipple. Maybe both nipples. And it was undeniably touching when The One Who Can Sing took his little, still-unnamed brother aside and reminded him, “Remember when we were back in our basement in Washington and you were just learning to sing? You never quite got the hang of it, but here we are anyway, with a real chance to lose to the world’s most talented 13-year-old or to the Garth Brooks guy. Everything is amazing! I am so high right now.” Their wide-eyed wonder at their heady circumstances comes so naturally because they know what failure means: Moving back into that abandoned lifeguard stand at the wrong end of Huntington Beach, subsisting on a diet of cold sand and the last greasy bits in discarded surf wax tins. And weed. That’s no life. Not when having Demi Lovato one “u up?” text away is so tantalizingly close.

Kang: After the Manny Pacquiao–Juan Manuel Marquez fight, Mitt Romney made the short trip from Las Vegas to Los Angeles to tell Fifth Harmony about the importance of the Latino vote in the modern electoral landscape. “Just sing in Spanish,” Romney advised, “you know, like that Tila Tequila woman.”

Exit polls in some state or another [LONG SECTION I DON’T QUITE UNDERSTAND WHERE I GET DROWSY BUT TRY TO REMEMBER TWO OR THREE WORDS SO I CAN SOUND LIKE I DIDN’T GET A 1 ON THE AP CALCULUS EXAM] and the verdict:

According to exit polls, there is one undecided voter. Nobody knows the identity of this voter, but according to Mitt Romney, “He’s probably Latino.” If Fifth Harmony can secure the one undecided voter who downloaded the Xtra Factor app, they might be able to fall into a dead heat with Emblem3, whose voting bloc consists of the three band members and their moms. If Stoned Guile forgets to vote (very possible), Fifth Harmony could actually stun the early favorites and sneak into the finals.

Yoshida: Whoa, way to break out the abstract K-pop hand flourishes! I really don’t care for that Ellie Goulding song, but that was a pretty decent arrangement. I didn’t even care that they reused the set from Lyric145’s “Supercalifragilisticexpialidocious” (sorry again, copy editors). Now I’m just kind of bummed that we’ll probably be saying good-bye to Fifth Harmony just as they’ve started to get weird.

Lisanti: You have to admit, it was pretty rad how they projected images from Emblem3’s mind onto those giant video screens as they ate mushrooms backstage. I guess the producers put some kind of brainwave sensors on the insides of their sideways baseball caps?

I should also note that I was a millionty-billionty percent yes on this song. They are in it to last one more week, except probably not, dawgs!

Kang: You know, I’ve been really bored with Carly Rose recently and was wondering why the show’s producers kept giving her really boring, slowed-down arrangements of already boring, slow songs. I just assumed that it was because Carly Rose couldn’t dance or even really sing anything that wasn’t “Castle on a Cloud,” but then I realized that Emblem3 is the only marketable act on The X Factor and that it behooves Simon to kneecap Carly Rose as much as possible. Hence, Carly Rose singing what has to be one of the weirdest arrangements of “Imagine” on the same night she sang an Elton John song. I don’t get who the target audience is here. Honestly, I don’t understand who the target audience is for the entire show. Who wants to hear 13-year-olds sing sappy karaoke ballads? Is the undecided voter a creepy 52-year-old drunk Korean man?

Yoshida: My guess is that Carly Rose’s aggressive stage upbringing has limited her exposure to popular music (Britney still hasn’t caught on to the fact that Carly had no idea who she was prior to The X Factor and still fails to recognize her in the halls sometimes) and they simply ran out of songs released after her birthday that she could convincingly learn in under a week. Next week: “Xanadu,” followed by “Send in the Clowns.”

Lisanti: I am bored with Carly Rose the way I’m bored with staring up into the sky on a beautiful day, losing myself in the majesty of a lone cloud almost imperceptibly crawling its way from one side of the boundless horizon to the other. You can do that shit, like, whenever — it’s always nice in L.A. There will be another perfect cloud tomorrow, and the day after that, into infinity. I don’t even know where I was going with this, I think I just happened to peek out the window and see a cloud that sort of looked like John Lennon’s famous squiggly self-portrait. Yeah, whatever, let’s get Carly to sing a Rihanna song or something. That’d be fun, probably. Oh, there’s a Yoko cloud. Nice.