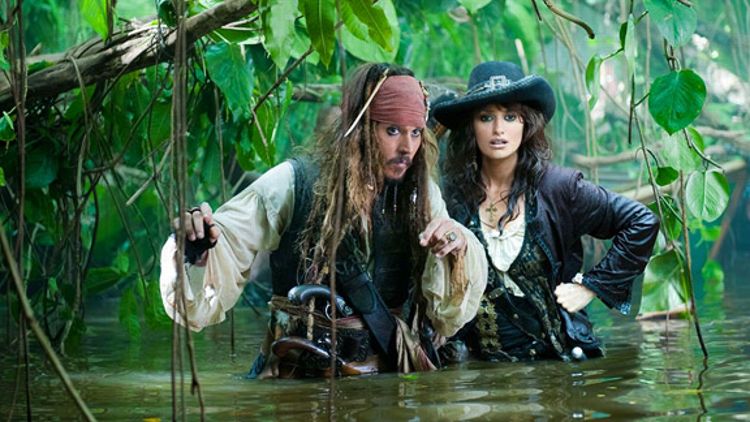 We haven’t been paying close enough attention to Johnny Depp. Over the past decade, while we weren’t looking, he somehow starred in no less than 40 percent of the 10 highest-grossing films in world box-office history, allowing him to purchase a private island with beaches named after Hunter S. Thompson and Marlon Brando. And his inherent quirkiness — once so beloved by protohipsters and Winona Ryder — has been spectacularly monetized: Slap a wig, some gaudy jewelry , or a Michael Jackson imitation on him, and suddenly the former bad boy is transformed into the surest thing in Hollywood.

None of this is news, of course. But as plans are announced for a fifth (!) Pirates movie — thus allowing Depp to continue indulging his three favorite pastimes: not bathing, hanging with Keith Richards, and adding to his $350 million nest egg accrued from this role alone — perhaps it’s time to reconsider. For many of us, Depp has been perpetually, effortlessly cool — the young cineaste’s de facto answer to the “best actor alive” question since the double-Ed-ed days of Edward Scissorhands and Ed Wood. Depp’s deification among people who probably think Rango is something you use to clean your shower is best summed up in this 1996 piece from Movieline magazine (which, in its ’90s peak, was practically a Depp fanzine), in which writer Edward Marguiles kvells over Depp’s “unpredictable, looks-easy-but-isn’t performances in unpredictable small films.” This goodwill has clung to Depp like smoke from one of his ever-present hand-rolled cigarettes (swoon!), cloaking him from critical backlash even as his IMDb page begins to read like a shrine to performances that not only are, in fact, predictable, they actually look easy and probably are. Next year’s paycheck-grabbing run alone — a cameo in 21 Jump Street, another turn in Tim Burton pancake makeup in Dark Shadows and ending with an epic facepalm role as Tonto in The Lone Ranger — is enough to suspect that Depp is either (a) messing with us or (b) a secret Mayan secure in the knowledge there be any movies to make — or lame TV shows to adapt — in 2013.

Depp, of course, is free to name his private beaches anything he wants and take on any part he fancies, but the Mr. Cool Guy mystique has got to go. All of the things we once loved him for — his breathlessly casual insouciance, his uncommon lack of celebrity vanity, at least when it came to his hair — were on display in 2010’s epically terrible The Tourist ($270 million worldwide!), a misguided break from action-figure land. Yet they were all wrong: Playing against the wax figure of Angelina Jolie on loan from Madame Tussauds, Depp was bloated and lethargic, seemingly lost without the benefit of eyeliner and a questionable British accent to hide behind. It was a depressing wake-up call. Depp, in 2011, is the thinking man’s Sam Worthington, a moldable lump of quirky clay able to be inserted seamlessly — and uncontroversially — into any billion-dollar big-screen content dump. We can only hope that somewhere out there, lying next to his French-model wife, on a king-sized bed made of gold and ground-up bits of Hunter S. Thompson, Johnny finds that thought as distressing as we do.