Jennifer Aniston’s Imaginary Wedding, and Other Tales From This Week’s Gossip Magazines 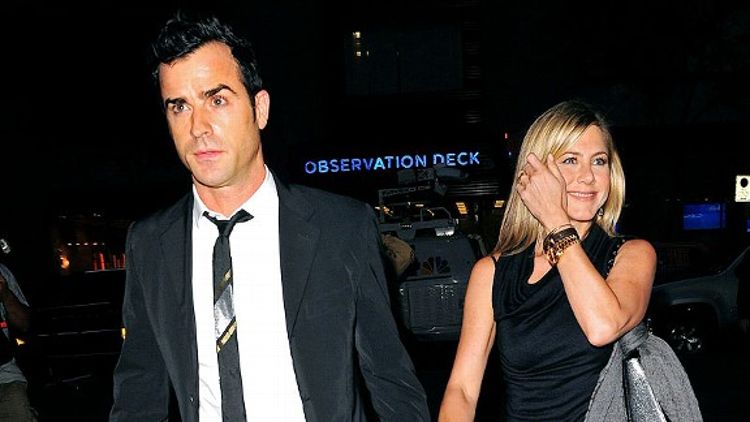 This week’s best almost-definitely-fabricated “Exclusive” is in Star magazine and it claims Jennifer Aniston and Justin Theroux eloped in Mexico. Aniston already denied it, so no dice. She even said that her recent minuscule weight gain that the mags have pounced on as evidence of a pregnancy was the result of having recently quit smoking (good 4 u girl!). Looks like Aniston has finally learned how to play the tabloids and win. The other rags focus on Kim Kardashian’s “rocky” marriage to Kris Humphries, The Real Housewives of New Jersey, and Dancing With the Stars fan favorite J.R. Martinez. The best picture that gained weird meaning from appearing repeatedly in different magazines was a very staged Vegas photo op of Kim K. and Kris Humphries posing over a cake shaped like the two of them driving a convertible. Strangely revealing, yet empty of real import, a bit like Ms. Kim K. herself.

A story that appeared in a few magazines and is reportedly true is that Jennifer Lopez performed at the Mohegan Sun and started crying during a segment of the show where dancers and models portrayed Lopez and her various ex-husbands and boyfriends. It’s weird to think that she signed off on that concept, let alone came up with it. Don’t worry, there’s video here and it’s totally bizarre. All the more reason for the George Saunders mention in Us this week (see below). Plus, plenty of Prince Harry party-rocking in San Diego, deadly dieting, Mariah’s twins, and Demi’s marriage crisis.

Best pictures: Jane Lynch trying on makeup at Whole Foods; Courtney Stodden and Doug Hutchinson at a pumpkin patch just before getting kicked out for “posing graphically with gourds”; Willem Dafoe reading a book by himself.
Actual story: “Trendy Tribal Attire”
Random insane sentence: “Kris [Humphries] is not drinking the Kardashian Kool-Aid”
Miscellaneous: 1. A list of “25 Things” you don’t know about adorkable starlet Zooey Deschanel includes this quote: “Pastoralia by George Saunders is one of my favorite novels,” probably the first and last time George Saunders gets shouted out in Us. But minor caveat: Pastoralia is a short-story collection! Zooeygate continues. 2. “When John Travolta recently tried to make a reservation at a KFC in England, the star, 57, was denied.” 3. Martha Stewart, expert humblebragger: “I’m a very good dancer. I don’t have time for Dancing With the Stars, but I would win.”

Best pictures: Patrick Swayze’s widow posing on a faux log with a Dirty Dancing wax figurine of her late husband (OOF); Mark Wahlberg’s gloriously tacky waterfall-adorned swimming pool; dogs in wigs.
Actual story: “Celeb Boobs Come In All Sizes!”
Random inane sentence: “It seems possible that Jen is motivated, in part, by a desire to be seen by her fans as a sought-after sex goddess.”
Miscellaneous: 1. “Besides the bizarre dark blush, LiLo tried her best to look ‘innocent.'” 2. The way existential Heidi Montag: “My boobs are crushing me.” 3. Snooki and JWOWW are “practically strangers now.”

Best pictures: Paris Jackson at a Chris Brown concert; a 2001 Ken Regan photo of Bob Dylan in a convenience store dressed like a cowboy; Herman Cain holding a rectangular pizza that has “999” spelled out in pepperoni.
Actual story: “Lindsay Lohan: Morgue Duty”
Random inane sentence: “This was Cher four noses ago.”
Miscellaneous: 1. Heidi Klum in a full Slim Goodbody-style X-ray muscles-and-bones unitard claiming her costume will be “gory in a sexy way.” 2. A perfect four-star rating for the new Coldplay album. 3. Steve Jobs, mega-jerk: “Before deciding to marry Laurene Powell, he surveyed his friends, asking if they thought she or his previous girlfriend was prettier.”

Best pictures: Jersey Shore‘s Deena in drag as DJ Pauly D; a pictorial of Jennifer Aniston’s nails claiming she’s broken so far out of her shell as to switch her manicure from “nude” to “caramel”; John Mayer’s hilarious new “Americana” look.
Actual story: “Should Barbie Get Tattooed?”
Random inane sentence: “Kate Winslet joined beau Ned Rocknroll in New Mexico at the unveiling of his uncle Richard Branson’s tourism venture Spaceport America.”
Miscellaneous: 1. Taylor Swift gets her Liz Lemon on: “I sit by myself and I watch Law & Order.” 2. “As for Ashton, he is eerily communicating through video blogs.” 3. The revelation that Tony Romo dumped Jessica Simpson “in an IHOP parking lot.”

Best pictures: Antonio Banderas and Salma Hayek posing with a giant orange cat-costumed mascot for Puss In Boots; Scott Disick in a silk paisley bathrobe; a two-page spread on “Post Breakup Beauty.”
Actual story: “Harry The Homewrecker”
Random inane sentence: “They’re going to town with the cashmere throws.”
Miscellaneous: 1. Snooki says the Situation is “one of those little hamsters that stops eating every five seconds to wash his face.” 2. From the aforementioned actual story: “Girls just swarmed his area and [Harry] was checking them out like they were meat in a supermarket freezer.” 3. A mention of Blake Lively’s older sister, Robyn Lively, star of cult eighties crapterpiece Teen Witch.