Jamie Foxx Is Playing a Character Named ‘Benjamin Stacks’ in the Remake of ‘Annie.’ Here’s How We Got to This Point. 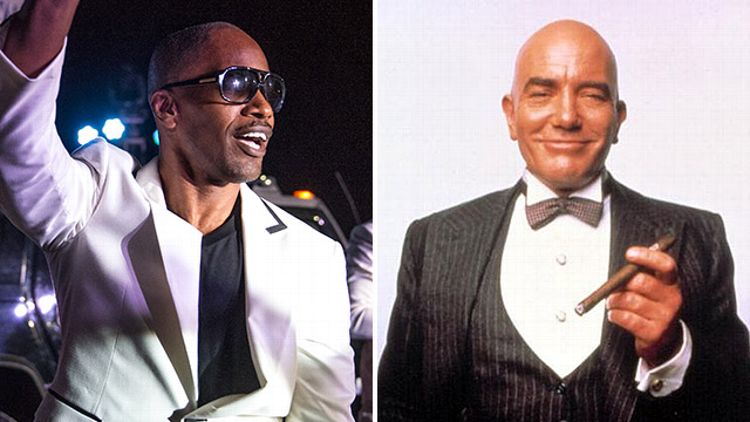 1706: Benjamin Franklin is born.
1885: James Whitcomb Riley writes the poem “Little Orphant Annie.”
1914: Benjamin Franklin’s face makes first appearance on $100 bill.
1924: The New York Daily News begins running Harold Gray’s comic strip “Little Orphan Annie.”
1930: The comic strip is adapted into a popular radio show.
1932: The first film adaptation, Little Orphan Annie, is released and panned.
1938: The second film adaptation, Little Orphan Annie, is released and panned.
1969: Shawn Carter, younger brother of Andrea “Annie” Carter (frequent dresser and shampooer), is born.
1977: The Broadway phenomenon Annie opens, includes song “It’s the Hard-Knock Life.”
1982: The first film adaptation of Annie is released, nominated for an Oscar for “Best Adaptation Score.”
1994: Jamie Foxx releases debut album, Peep This, which peaks at no. 78 on the Billboard 200.
1995: Will Smith lands his first executive producer credit, for The Fresh Prince of Bel-Air, Season 6, Episode 1.
1997: Puff Daddy releases “It’s All About the Benjamins.”
1997: Jay-Z hears DJ Kid Capri play the instrumental to “It’s the Hard-Knock Life” on the Puff Daddy and the Family World Tour, is reminded of childhood.
1998: Jay-Z releases “Hard Knock Life (Ghetto Anthem).”
2000: Willow Smith is born to Will and Jada Pinkett Smith.
2000: Jay-Z releases “Anything,” heavily reliant on a sample from Oliver!
2002: All About the Benjamins is released in theaters, starring Ice Cube and Mike Epps.
2003: “Caddy more trucks, it’s Daddy Warbucks. And you orphan Annie” — Cam’ron, “I Really Mean It” (Roc-A-Fella Records).
2003: Quvenzhané Wallis is born.
2003: “From O’s to opposite of Orphan Annie” — Jay-Z, “Dirt Off Your Shoulder” (Roc-A-Fella Records).
2007: André Benjamin refers to himself as “Three Stacks” three times in UGK’s “International Players Anthem (I Choose You).”
2009: Jay-Z joins Will Smith to executive produce Fela! on Broadway, proving his love for Broadway shows with exclamation points in their titles.
2013: A$AP Rocky makes reference to “Benjamin 3 Stack” in song “Wild for the Night.”

And now we’re here. April 30, 2013. If you take one piece out of this fragile Jenga tower of a timeline, today’s news can’t happen. So appreciate every piece, from A$AP Franklin to A$AP Rocky.

In the latest move of their rich-guy/third-career crisis, Jay-Z and Will Smith have teamed up to executive produce a film adaptation of Annie. This is old news.

The title role, originally intended for Will’s daughter, Willow, will now be played by the Beasts of the Southern Wild force of nature who I want to put in my pocket forever and ever, Quvenzhané Wallis. This is, also, old-ish news.

What matters today, concerning the future of this film, is that Jamie Foxx is in talks to play the iconic role of Daddy Warbucks. Kind of. The only difference: In this adaptation, Daddy Warbucks will now be known as “Benjamin Stacks.”

This isn’t good. I promise. I don’t care who is involved — you can’t just rename one character in a movie and have his name mean “one thousand hundreds.” Also, while “Benjamin Stacks” isn’t necessarily a thing, hearing the two words in the same sentence immediately takes one down a Stankonia-fueled road, something that has nothing to do with a redheaded orphan and the bald dude from Stealth, set to play a character with a name one kick-ball-change away from “Racks McLettuce.”

All is not lost, however. If you’re reading this, Jay, Will, and director Will Gluck, you have two options here, if you aren’t trying to ruin everything.

Option 1: Give the Internet the old “j/k” and switch his name back to Daddy Warbucks, immediately.

Option 2: Change all of the names of the characters and hope for the best.

There isn’t a third option. At least now you know how to proceed.