James Cameron Heads to Space to Look For Unobtainium 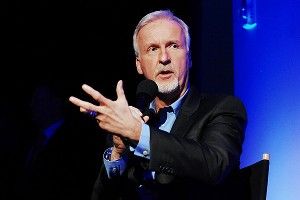 As Vulture points out, James Cameron’s latest highly ambitious non-movie project is here. Along with a group of investors that include Google’s CEO Larry Page and its Executive Chairman Eric Schmidt, Jimmy is backing a company called Planetary Resources Inc. which is looking to mine asteroids for precious minerals. That’s right: James Cameron’s going into space.

Hot off the heels of his historic sea dive, this is clearly the latest chapter in Cameron’s attempt to turn himself into the nerd version of the Dos Equis guy. And it might be working: The original AP report calls him “explorer and filmmaker James Cameron.” Explorer first! But is this all a bunch of wide-eyed speculation from billionaires with childlike sense of wonderment? Possibly, says the AP:

The mega-million dollar plan is to use commercially built robotic ships to squeeze rocket fuel and valuable minerals like platinum and gold out of the lifeless rocks that routinely whiz by Earth. One of the company founders predicts they could have their version of a space-based gas station up and running by 2020 … Several scientists not involved in the project said they were simultaneously thrilled and skeptical, calling the plan daring, difficult — and highly expensive … The costs are just too high, said Purdue University planetary geologist Jay Melosh, who called space exploration “a sport that only wealthy nations, and those wishing to demonstrate their technical prowess, can afford to indulge.”

But there’s something Jay Melosh and the rest of the spoilsport naysayers don’t understand. If I know James Cameron the way I think I know James Cameron, then the man isn’t going into space to look for boring old platinum and gold; he’s going into space to find unobtainium, the mythical mineral worth $20 million a kilo for which the good people of Pandora so valiantly fought. Yes, it’s a made-up word for a fake mineral that James Cameron himself created for Avatar. But you’re trying to tell me that, at no point, all this space-mining talk got Cameron thinking about discovering some never-before-known space-substance that would immediately earn back the costs of space-exploration because it’d be so valuable that it’d be worth waging theoretical interspecies space-war over? Let’s just hope that once James Cameron does discover unobtainium, he’s a lot cooler than Giovanni Ribisi about it.

Ashton Kutcher's Sexual Walkabout ... and Other Horror Stories From This Week's Tabloids