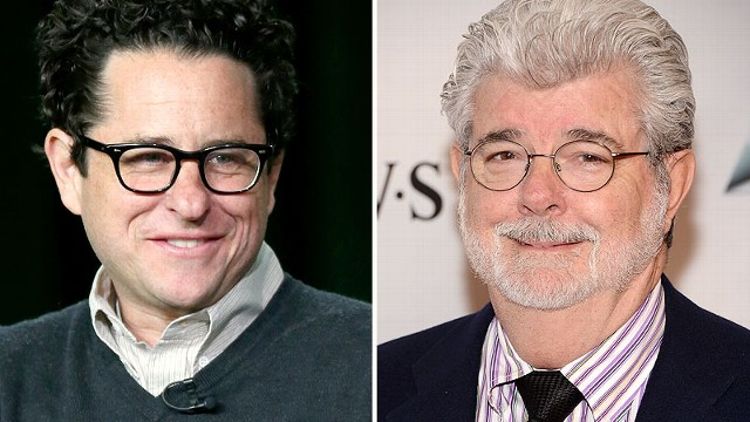 When I wrote about George Lucas last year, I called up J.J. Abrams. There wasn’t a hint that Abrams was going to be directing the next Star Wars movie, as The Wrap reported yesterday. There wasn’t even that much of known relationship between Abrams and Lucas. In the movie world, Lucas doesn’t do hands-on, Spielbergian mentorships. But, as Abrams explained, he’d recently sat at Lucas’s knee, like Luke with Yoda, and had learned from the master.

“To hear his stories of frustration with the system,” Abrams told me, “the battles to have certain things happen a certain way, things he decided to do on a whim that ended up being gospel to the legions of fans … ”

“I feel very lucky I got to speak with him,” Abrams continued, his voice filled with wonder. “It’s like watching a great documentary about a filmmaker you care about and hearing all these amazing stories of behind-the-scenes struggles. He’s incredibly generous in that way.”

Abrams has always been identified as a Spielberg acolyte. While Super 8 was not only highly Spielbergian, it was produced by Spielberg himself. But Abrams, who has a fanboy’s awe of older directors, is a Lucasite, too. “American Graffiti is so undeniably spectacular,” he told me. “You kind of forget … that’s enough. Just doing American Graffiti is enough. Then he went off and did Star Wars and produced Indy.”

Abrams’s life spans Star Wars’ originals-prequels divide. Born in 1966, Abrams grew up “basically relating to Luke Skywalker,” and thought of Darth Vader as “evil incarnate.” His kids, however, grew up with the prequels. They related to Anakin. “If you had said during Christmas of ‘77 that when I had kids they’re going to be raised by Darth Vader,” Abrams said, “I would never have believed you.”

“The lessons I’ve learned from George, as a filmgoer, that have informed how I approach movies, as a filmmaker, are legion,” he continued.

First, there was Lucas’s ability to jump from the macro to the micro — from “thinking in a such a vast way to thinking very specifically and emotionally.” In Star Wars, Lucas toggled between Star Destroyer battles and Luke’s daddy complex, just as Abrams in Star Trek moved between the Romulan Narada and Kirk’s daddy complex.

Second, there was Lucas’s abilities as an editor. (Lucas always thought of this as his best skill.) “It’s always incredible to look at editing, that if certain moments were left to play on, what damage that could do to the narrative rhythm of stories,” Abrams said. “The amazing editorial approach of American Graffiti and THX and the Star Wars films is as important an element of the success of the stories as the stories themselves.”

Abrams found solace in Lucas’s tangles with the studios, which Lucas loves to relate. At the time Abrams and Lucas talked, Lucas hadn’t found any buyers for Red Tails. “I gotta say, it’s incredibly gratifying to learn that even George Lucas has those battles, even on Star Wars, Empire, and Jedi, after Raiders. The idea he’s always had to go to the mat for what he believes is a very good reminder that it’s OK to not have things go smoothly.”

Abrams was also fascinated — as we all are — by Lucas’s decades-long promise to make art films. “He was talking to me about how he always wanted to make smaller, weirder films … I’m dying to see those movies.”

Lucas had been talking about it for a long time, I said. “Artists are allowed to make lots of proclamations,” Abrams said. “That’s the artist’s job. The fan’s job to make them keep at it, to keep working.”

Finally, I asked Abrams what he learned from the fanboy revolts. Abrams himself had wandered into the Star Trek universe and made a movie that was both very good and respectful of the canon. Yet if you looked at the Ain’t It Cool News comments section, there was snark about his lens flares (see here), small continuity errors, and other matters.

What were the lessons of the Lucas vs. fanboydom? I asked.

The Star Wars people were pretty brutal, I said.

“It’s like, please,” Abrams said. “You’re having this conversation because the Force is with you.” Now — allegedly — it’s with him.

Five Questions on American Idol: Is Nicki Minaj the Greatest Judge Since Simon?