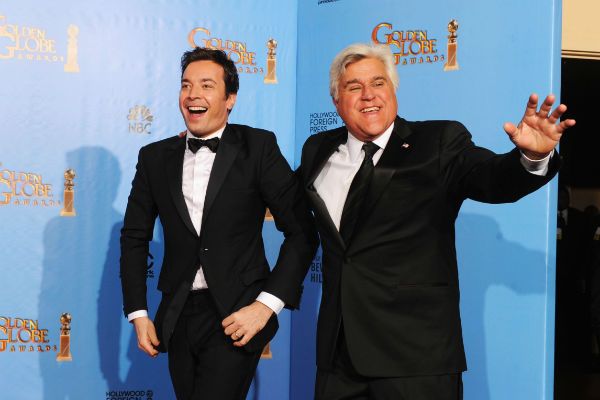 Just when you thought it was safe to go back in the water. They’re baaaack. In space, nobody can hear Conan O’Brien scream. Pick any horror movie tagline, really. The point is that, according to the Hollywood Reporter, NBC is once again looking to shore up its late-night future by making plans to ease Jay Leno out the door and install Jimmy Fallon as his 11:35 p.m. replacement by summer 2014.

We’ve seen this movie before — we’ve literally seen this movie before — and I’m not sure we’ve all recovered from the fallout of the Jay-Conan fiasco of 2010. But I suppose unless you’re into the idea that Jay Leno should hold the position of Tonight Show host until he dies in office, like a Supreme Court justice or a pope (current events notwithstanding), NBC will have to move soon on a replacement for Leno — one they’ll actually have to stick with. Is Fallon that guy? There are more than a few similarities with Conan: He’s been bringing a very different energy to his late-night show, NBC figures he can be competitive in the 18-to-49-year-old demographic, and is probably worried that CBS could make a play for him if David Letterman decides to retire in 2014. Things are so eerily similar to the previous late-night successor situation at NBC that Fallon may want to rub himself with a black cat or do whatever else might break the mojo.

One new wrinkle this time is that Jimmy Kimmel (usual disclosure: ABC and Grantland are both owned by Disney) has moved to 11:35 and is drawing away that 18-to-49-year-old audience, per THR.

“The more time Jimmy Kimmel is in that slot, the more the young audience goes that way, the harder it is for Jimmy [Fallon] to keep that audience,” says a source familiar with the network’s thinking.

The report says NBC is looking to make an announcement in May, the better to lead us on a second farewell tour for Leno.

It should be noted that Fallon and Leno joked about the possibility of takeover dramz at this year’s Golden Globe Awards. Meaning that we’re one Taylor Swift–Michael J. Fox’s son hookup away from the Globes attaining official oracle status.