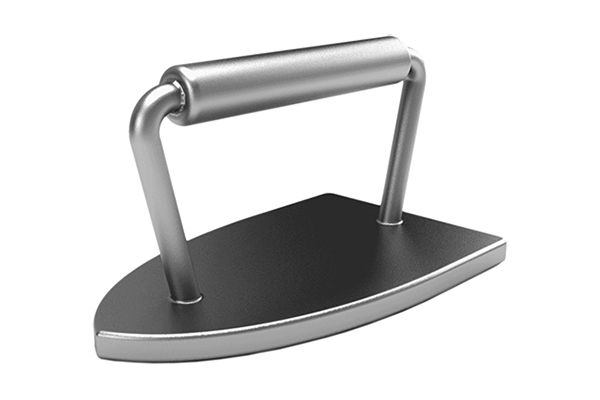 The iron Monopoly piece is dead.

Who do we have to thank for this tragic crime? A Facebook contest. Yes, this life-or-death decision was determined by Facebook. This is a new low for our species.

Unbeknownst to me, Hasbro launched the “Save Your Token” campaign (deceptively aimed at the removal of an unpopular piece) alongside another campaign, also conducted via Facebook, to pick a new token. And when it was all said and done, it was not the thimble, nor the battleship, nor that stupid wheelbarrow that got the ax. It was the iron.

Our fallen soldier got just 8 percent of the public’s vote, less than fellow struggling pieces the wheelbarrow and the boot. And because of the iron’s poor showing, Hasbro is ceasing its production. Immediately.

And that brings us to this somber moment: Yes, a celebration of life, but also an acknowledgement of wrongdoings and societal ills.

You see, I love ironing. Always have. It’s therapeutic. My mom would sometimes iron, just as a way to clear her head. I took on this trait, and because of this my Monopoly piece selection was always a no-brainer.

There were many great things about playing with the iron, but perhaps the obvious reason you wanted it was the way it moved around the board. With flashier pieces with odd curves and shapes, you typically picked them up and tapped them on each space until you arrived at your destination. With the iron, however, with that handle and that smooth, shockingly flat foundation, you could just glide it across the board, only hitting the occasional speed bump when you crossed one of the creases where the game’s board folds up.

Graceful, the iron was.

Also, simple. Perhaps too simple, as it’s clear we no longer live in a simple time.

And now, the real:

The Internet has finally gone too far. I gave it a free pass when it became clear there was no such thing as privacy and that my identity could be compromised, leaving me penniless and with a smeared reputation at any given moment. As recently as yesterday, I looked the other way as it destroyed one of America’s greatest treasures: Saturday mail service.

But this, the assassination of the iron? I can’t pretend like this didn’t happen. I can’t act as if this wasn’t an act of malice that goes all the way to the top, from the random Facebook voter to the higher-ups within the Hasbro gaming empire.

While we’re a bit sad to see the iron go, the cat token is a fantastic choice by the fans and we have no doubt it will become just as iconic as the original tokens.

Blatant, in-your-face disrespect. As a lover of the iron, his words are hard to read.

Oh, and then there’s that other detail he alluded to, post-disrespect. THEY REPLACED IT WITH A CAT.

I love cats, don’t get me wrong, but in this day and age, what’s more “Internet” than a cat?

Yeah, that’s Nyan Cat, the Billy Shakespeare of this Internet thing. Consider his popularity, along with articles like “Why Do Cats Run the Internet? A Scientific Exploration” in the New Republic , “Cats On The Internet: A Psychological Explanation” in Forbes, and “30 Cats Hanging Out in Shoes” on Buzzfeed, and it’s clear this is a real thing. Yes, they’re cute and they’re sassy, but they’re essentially the weekend brunches of the animal world, and few things, living or inanimate, have benefited more from Gore’s Information Superhighway.

The iron never stood a chance. Not when the Internet’s involved.

What’s next? Replacing the old-timey car with an Angry Bird? Thimble with an iCloud? Community Chest cards with Push Notifications?

It’s a slippery slope, but I’m now convinced that both this honorable game and our once-honorable society will succumb to what will be an untimely, face-first swan dive.

Per usual, I think Jeezy said it best:

Too many haters in here, I don’t feel the love.
RIP, RIP, RIP, RIP
R-I-P, We just killed the club,
Drink patron to the head, almost killed a thug.

Haters killed the iron. There isn’t a more appropriate way to articulate the matter at hand. That “we” is the Internet, and “the club” is Monopoly. The only issue with the rest of the passage is that Jeezy said the “thug” in question was “almost” killed.

But that “thug” is the iron. And the iron is dead.

Iron, just know that were anything to ever happen to my Ken Griffey Jr. rookie card, you were my backup Inception totem. You deserved to go out with more dignity and respect, but that wasn’t the hand you were dealt. You lived a great life, iron, and a long one at that. But even with that said, you left us too soon.