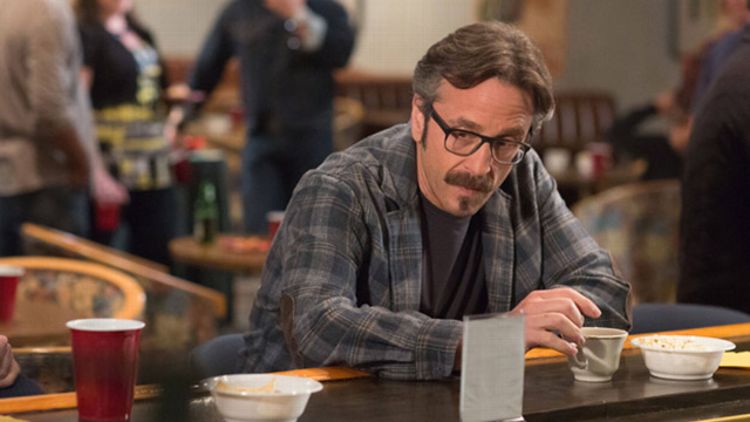 “Can we make it about me for a second?” asks Marc Maron in the third episode of Maron, his new quasi-comedy series debuting tonight at 10 p.m. on IFC. But let’s be real: Marc Maron has always been about himself. From his substance-abusing early stand-up days (when, as he likes to remind us, he was often standing just to the side of Sam Kinison) through his second career as a 12-stepping political yakker on Air America Radio, Maron cultivated a dyspeptic public persona based primarily on sucking all the air out of a room and replacing it with bile. His comic confessionals weren’t sad-sack, they were hard-edged and bitter, fueled by a deep-seated anger that didn’t cover up inner sadness so much as thrive on it. But when angst is both your business and your life, long-term prospects tend to suffer. A few years ago, I saw Maron open for an ascendant Aziz Ansari in a bar basement in Brooklyn. Maron seemed both surprised and furious to be there, a dynamic that was very evident in his funny, self-savaging set. Somehow his tendency to burn bridges had transformed him into the troll living underneath the smoking wreckage. At the time, starting a podcast seemed like the last resort of a humbled narcissist, a way for Maron to talk about his favorite subject with no one else in the room to listen.

But a funny thing happened on the way to the glue factory. WTF, the podcast Maron began in his Los Angeles garage in 2009, revealed a warmth in him unimaginable to anyone who’d spent the previous two decades paying attention. It also seemed to come as a shock to his guests. One by one, former friends and foils strapped on the headphones across from him with their hackles raised and ended up with their defenses down, drawn in by Maron’s weirdly effective empathy. It seemed that Maron’s particular brand of bloodletting worked better in intimate surroundings; his oversharing suddenly became generous when there was someone to share it with. WTF quickly turned into required listening for anyone deeply curious about the inner demons lurking behind famously smiling faces, and occasionally — as with Louis C.K., Todd Glass, and particularly the late Mike DeStefano — it became practically transcendent.

Of course, there’s another part of WTF, too, right at the beginning, amid the shout-outs to upcoming club dates and testimonials for Stamps.com. That’s the time when Maron lets Maron be Maron — venting about his needy mother in Florida and the even needier cats out in the yard. This is the part that I tend to fast-forward, and it also unfortunately seems to be the inspiration for Maron, a not-very-funny vanity project built around a very funny (and very vain) guy. In reality, talking to others has seemed to do wonders for the previously stunted worldview of a forty-something used to stalking stages alone. But the Marc Maron we’re introduced to tonight is stuck with himself in all of the bad old ways. He vents to a skeeved-out veterinarian, waves kitty diarrhea in the face of his ex-wife, and obsesses over an anonymous Internet hater like a malignant mole. There’s an attempt to fold in elements of WTF by having guests drop by — literally, in the case of Dave Foley, who shows up on Marc’s porch in the premiere, unannounced and very drunk — but the banter, at least in the early going, is heavy and forced, the opposite of what makes Maron’s freewheeling conversations take flight. Maron‘s best moments are clearly the least scripted, when a podcast plays out for our enjoyment. But even that is lessened by the cameras rolling; there’s still an emphasis on talking but it’s as if there’s no longer any room to listen.

The obvious model for Maron is Louie, another personal and idiosyncratic half-hour built around a world-weary auteur. But you can only be solipsistic if you have something to say. And the first few episodes of Maron lazily circle the same dog track of insecurities and competitiveness familiar to anyone who’s ever listened to the podcast: Foley is more beloved than Maron, Denis Leary more masculine, and Jeff Garlin more wealthy. (I wouldn’t be surprised if a future episode is built around the oft-told story of Maron’s failed meeting with Lorne Michaels, the great white whale of his professional existence.) Far more worrisome is the lack of jokes. The premiere paws at soft targets like gay panic and lisping dungeonmasters like one of Maron’s beloved pets with a dead mouse. There is a sweet spot between comedy and crisis, and Maron regularly locates it with crackling spontaneity in his interviews. On TV it appears much more elusive, only arriving in the third episode in the wonderfully peevish form of Judd Hirsch, clearly having a ball playing Marc’s bipolar, vitamin-peddling, absentee father.

It’s a testament to our tech-driven, narrowcasted cultural moment that Marc Maron was able to reinvent both himself and his career on the fly. But it’s a downside to this niche-ness that he was immediately handed a TV show as a reward, as if the very thing that made him exceptional in one medium could be easily poured into another like a steaming cup of Just Coffee Dot Co-Op. On the one hand, the Maron of Maron seems cheerfully aware of this challenge, railing into the mic at one point about how real wealth will never happen until “you make yourself an exploitable commodity” for someone else. But that seems willfully ignorant of the fact that Maron’s already enriched himself and his audience immeasurably merely by making himself available. For now, Maron is a monologue when what’s really valuable is the conversation.