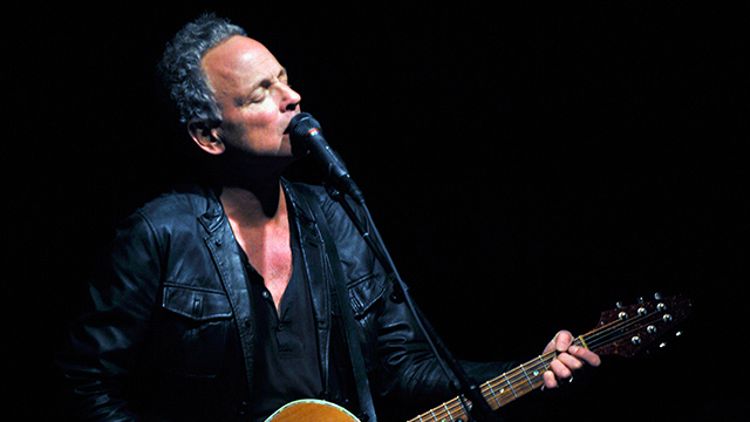 Lately I’ve been obsessed with the fact that in the next 10 years, a generation of iconic musical artists will either die off or be physically incapable of performing regularly. Like global warming, the end of classic rock as we know it seems obvious and yet too abstract to fully grasp. Mick Jagger’s waistline appears to be melting at an alarmingly accelerated rate, but what does this mean for us as a society? What impact will the decay of an industry, a way of life, a shared history, have on our future? It’s impossible to know for certain. All we can do is try to appreciate the fascinating changes that have been wrought on the entertainment climate in the meantime.

This is what brought me to my sisters’ former high school last Saturday night for a concert by Fleetwood Mac guitarist Lindsey Buckingham.

Technically speaking, the concert took place at a “state of the art” 800ish-seat performing arts center in South Milwaukee, but it’s really just an auditorium where I had previously sat through roughly five high school musicals running approximately 67 total hours in the late ’00s. You can take the kids out of the venue, but you can’t fully remove the venue from the kids. There was no mistaking the serious opening night-of–Guys and Dolls vibes in the lobby. Next to a merch table piled high with lumpy $40 Lindsey Buckingham hoodies and $20 CDs — fans of Lindsey Buckingham’s solo work being one of the few remaining demographics willing pay 1998 Sam Goody prices for a record — there was a sweet-looking, 50-something social studies teacher–type hawking cookies of the chocolate chip and sugar varieties. It goes without saying that this was a no-beer zone, but the temperance even extended to soda, with servings of Mountain Dew coming in cans no larger than 7.5 ounces. Perhaps backstage it was like The Roxy in 1977, where well-monied rock stars once rubbed shoulders and possibly other parts of their denim-clad bodies. Maybe Lindsey was dry-humping the finest cougar in suburban Milwaukee while I was trying to discern whether the most interesting-looking guy in the lobby resembled Balance-era Michael Anthony or Kip Winger’s Rock ‘n’ Roll Fantasy Camp period. Maybe, but I doubt it. All I know is that neither coke nor Coke were available in decadent quantities in the front of the house on this night. This was big-time ’70s rock music on a ’10s choir-concert budget.

About the concert: It was a little strange. It was also fantastic. Definitely more fantastic than strange. Lindsey dressed his taut frame in a black leather jacket, a black shirt with the top two buttons undone, and dark slacks. His skin was bronzed and tight, and his chest appeared smooth and shiny. He is a 63-year-old man who could find work as a body double for a member of One Direction. When he walked out onstage, he briefly held a facial expression that said, “I can’t believe I’m playing a high school auditorium on a Saturday night at my age.” But that quickly dissipated. Lindsey got to work. Lindsey played by himself, switching between electric and acoustic guitars. He worked way harder than he had to. He played loud; even on the acoustic, the arpeggios sent shock waves down to my soles. When he sang, he sang with the twitchy, hammy, totally-unnerving-when-you-see-it-in-the-flesh Lindsey Buckingham intensity. “Go Your Own Way” might be a soft-rock oldie that scored a million divorces and 100 million barbecues in the past 35 years, but for Buckingham, it seems like it still kind of means something emotional and painful. When he denounces Stevie Nicks as unfeeling and slutty, he makes you believe the anger is fresh for him. Onstage, Lindsey Buckingham does not seem at all settled.

Today, Buckingham is best known for (1) being spoofed on Saturday Night Live by Bill Hader in the recurring sketch “What Up With That?” and (2) being the chief architect of Fleetwood Mac’s Rumours, which is still the most successful album ever made not involving Michael Jackson, Glenn Frey, or the vomit-choked ghost of Bon Scott. But for me the main attraction with Lindsey Buckingham is his guitar playing; more specifically, his song-outro guitar playing. Lindsey Buckingham is the finest outro guitar soloist in rock history. On the way to the show, I listened to Fleetwood Mac’s 1982 album Mirage, which comes from the band’s “competent enough to keep the hairdressers on the payroll” period. Mirage includes the hit singles “Gypsy” and “Hold Me,” which I knew Buckingham wouldn’t play because he didn’t write them, though they feature two of his best outro guitar solos. To my surprise, Buckingham did play “I’m So Afraid” from 1975’s Fleetwood Mac, which is like half-guitar solo, over a pre-recorded backing track that somehow made the song even more majestic. Then there was this other song I had never heard called “Come,” which ends with a solo nearly as good as the one on “The Chain,” the filet of Lindsey Buckingham outro guitar solos.

Early in his set, Buckingham clarified that he was playing a high school auditorium by choice, and not out of necessity. Buckingham says he’s beholden to a small machine (which is a solo career) and a big machine (which is Fleetwood Mac), and one can’t exist without the other. He referred to this concert as “an experiment,” though it was unclear whether he was the subject or the audience. Anyway, Buckingham gives this exact same “small machine vs. big machine” speech on his new (very good) live album, One Man Show, which was released earlier this month on iTunes. I only know this because I saw Buckingham live and was compelled to look at his website when I got home. It never ceases to amaze me how much new music is released by quantifiably popular artists — and Buckingham’s sales statistics are better than most — that you never hear about in the media. It reminds you just how futile it is to even pretend that you can cover popular music at all comprehensively. At best, you can rope off a small portion of the overall landscape and convince yourself that the rest of it doesn’t exist. One More Show resides in the terrain that most music critics like to believe isn’t there. Pretty soon, it won’t be.

I ended up downloading One Man Show when I got home, and I’m glad because everything else about the record was identical to the concert I just saw. (The album was recorded in September at a show in Des Moines.) Same set list, same stage patter, some outro guitar solos. Some people might see this as a negative, or as a larger knock on the generation of studio-bred ’70s El Lay pop-rock professionals that Lindsey Buckingham represents. But I am now old enough to comfortably enjoy excellent musicianship, and One Man Show delivers precisely the facsimile of an enjoyable experience that I was looking for.

By the way, Buckingham isn’t bullshitting about the “small machine/big machine” thing. He really didn’t have to be there. Mick Fleetwood complained in an interview with Playboy earlier this year that solo tours by Buckingham and Nicks are keeping Fleetwood Mac off the road, and therefore preventing the huge financial windfalls that accompany Fleetwood Mac tours. (Fleetwood Mac grossed more than $70 million in 2009.) This concert at a high school in the Milwaukee area was costing a sizable cadre of anonymous concert promoters and T-shirt vendors a fortune. (Fleetwood Mac plans to tour in 2013.)

This might make this concert seem pointless, or at least self-indulgent. But it didn’t seem that way as it was happening. On Saturday I thought a lot about how the big machine is running on ancient gears. I wondered how many more $70 million Fleetwood Mac tours there can possibly be. I imagined all the arenas that Lindsey Buckingham has filled over the years, and how he must have realized at some point that playing clubs and small theaters and high school auditoriums will add another 10 years to his career. He knows his world is shrinking, and he’s accepted it. It was a little strange. It was also fantastic. Definitely more fantastic than strange.