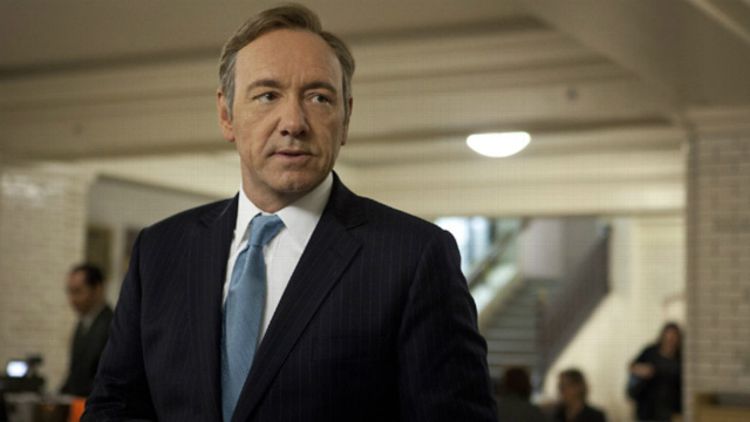 House of Cards begins with a bang, followed immediately by a whimper. A hit-and-run has broken the smug, moneyed calm of an immaculate Georgetown street; an unseen dog lies on the curb, dying. From the low POV of the expiring pooch we see Kevin Spacey, natty in a tuxedo, emerge from a townhouse and address the camera. “There are two kinds of pain,” he intones, fiddling with his cuff buttons. “The kind that makes you strong, and useless pain.” Spacey’s character, South Carolina Congressman Frank Underwood, has no time for the latter. We know this because he tells us directly: He’s the rare sort of man willing to act, to “do the unpopular thing, the necessary thing.” We also know it because in the midst of this monologue, he kneels and calmly smothers the dog to death with his bare hands.

As far as introductions go, it’s a memorable one. But then Cards was constructed specifically to make a big impression. An adaptation of the highly regarded 1990 BBC miniseries of the same name, the project is the first original series to be bankrolled by Netflix. And, in order to draw your attention from midnight binge streams of Say Yes to the Dress and Cake Boss, the former envelope company backed up the Brinks truck to secure top-flight talent, including Spacey and executive producer David Fincher, who directed the first two episodes. Like a fish sidling up to a poker table full of whales, Netflix also had to pay a premium to snatch the project away from more established content farms like HBO and Showtime; it did so by guaranteeing, sight unseen, 26 episodes, spread out over two seasons, at a cost of over $100 million. (Netflix isn’t exactly NPR, but it’s hard not to feel like I had some financial stake in all this by letting those Eric Rohmer DVDs collect dust on my coffee table for the better part of 2010.) Beau Willimon, the one-time Howard Dean aide who transformed that idealism-crushing experience into a highly regarded play (“Farragut North” which was later Clooney-ized into the film The Ides of March), was drafted to Americanize the story of a scheming government minister who will stop at nothing to achieve power. Anyone who’s glanced at Politico.com over the past four years — or watched The Ides of March on Netflix — could tell you that it can’t have been too taxing an endeavor. The cynical Willimon probably had to resist the urge to have Underwood strangle a bald eagle.

The not-at-all-honorable Congressman is the house Majority Whip — one gets the sense he’d relish the title even more if he were allowed to interpret it literally — but when we meet him, he’s dreaming much bigger. After helping get a charismatic lightweight elected President, Frank has been promised the State Department. “I won’t be a plumber much longer,” he tells us, in one of his excessive, fourth-wall-breaking soliloquies. But it’s just about the only time we see him be wrong about anything. The President-elect, as Frank is tartly informed by new Chief of Staff Linda Vasquez (Sakina Jaffrey), feels that he’s much more valuable in his current post, where he can continue to “keep the sludge moving.” But a skilled plumber who isn’t afraid to get his hands dirty is capable of gumming up the works of an entire house, even one located on Pennsylvania Avenue. After a sleepless night filled with illicit, Boehner-esque cigarettes, Frank launches what could only be called a cold civil war against those who wronged him. It’s a considerable number; the dopey do-gooder who actually got the Secretary of State job is just the beginning. If Nixon had an enemies list, Frank Underwood is working with the entire phone book. No actor alive does dead-eyed malevolence better than Spacey and, as he twirls rivals on the dance floor and exhales lies like secondhand smoke, it’s clear that no one is better at dead-eyed charm either.

Aiding Frank in his backroom backstabbing is an impressive cast, including the creepy Michael Kelly as an aide-de-camp, the fantastic Corey Stoll (Hemingway in Midnight in Paris) as a Spitzerish Congressman who prefers powder to power, and Jayne Atkinson as a Southern Senator. Theater greats like Larry Pine drop by for breakfast, The Wire’s Reg E. Cathey is around to serve Frank a rack of ribs. David Fincher continues to do right by the Mara family — which is a mitzvah, because they’ve had such rotten luck — by giving Rooney’s sister Kate the best role she’s ever had. As Zoe Barnes, a bloggy striver at the fictional Washington Herald, the elder Mara is finally allowed to look her age and use her sharp-edged beauty as a weapon instead of a shield. Unappreciated by her old-school bosses, Zoe drinks wine out of coffee cups and propositions Frank not for sex but something far more valuable: information. Despite a few dead-tree clunkers (“Hey, Twitter twat. WTF?”), Willimon’s treatment of the character, and media in general, is uncommonly nuanced, at least through the first two episodes. Zoe celebrates the Internet as the marvelously effective shortcut that it can so often be: to knowledge, to influence, to success. But in her clandestine dealings with Frank — they meet in metro stations and near parking lots (“Very Deep Throat,” she tells him) — she also demonstrates the millennial tendency to conflate celebrity and notoriety, an inability to consider the very real lives on the other side of her laptop screen.

Frank doesn’t appear to be tempted by Zoe — not even when she comes a’courting with a deep V-neck and a push-up bra — because he’s got his hands full at home. As played by Robin Wright, Claire Underwood is her husband’s strongest ally. The fact that she works as a lobbyist for an environmental group doesn’t make her any less monstrous; like Frank, she’d rather fire friends than compromise her own seething ambition. It’s rare on television (though certainly not in Willimon’s beloved theater) to see a spouse allowed to be an equal partner in bad behavior, and Wright makes the most of it. A combination of age and stark lighting has frozen her Princess Bride beauty into hardened carbonite; she positively trembles with chilly fury as she eggs her husband on, plying him with kisses and coffee and sweeping up the glass he shatters along the way. In a way, Wright is playing the dark-side version of Annette Bening’s idealistic character in The American President, which only reminds me how surprising it was that that movie’s author, Aaron Sorkin, and David Fincher were able to work together and how unsurprising it was that the McDLT combination brought out the best in both of them.

Because when left to his own devices, Fincher is a brutally cold technician and in House of Cards he may have constructed his Winter Palace. He directed the first two episodes — other noteworthy helmers followed, including Joel Schumacher, Carl Franklin, and James Foley — and his immaculate precision is the perfect antidote to Willimon’s occasionally florid speechifying. Fincher’s D.C. is a bruised city, lit in a muted parade of blacks and blues, and its denizens are either vicious sharks or deluded chum. Governing is almost beside the point here, as is any human behavior not directly connected to appetite. In this, Fincher reminds me of Spacey’s character the last time they got together, a clinical curator of deadly sins. This relentless focus makes House of Cards unquestionably compelling but also brutal, a nonstop barrage of big talk and assorted nastiness. It’s unclear how invested one can become in a fight that has no purpose other than the collecting of scalps and the drawing of blood. This is Washington reimagined as The Hunger Games; it’s not merely out of touch, as real life pundits love to claim, it actively prefers it that way. “Nobody can hear you,” Frank murmurs to a wild-eyed political protester in the second hour. “Nobody cares about you. Nothing will come of this.”

Whether the same can be said of House of Cards will be clear soon enough. Netflix is dumping the entire first season onto its servers beginning tomorrow to allow for maximum binging. (And to disallow any recapping. I imagine truly dedicated fans will finish these 13 episodes long before I do.) The move is certainly smart for Netflix’s business model, and it reflects the way its subscribers — heck, most of us — consume television now: not in weekly installments but in great, gasping gulps. But it also challenges the very definition of the medium in ways I’m not sure we’ve quite grasped. Unlike their peers stuck struggling in the unpredictable scrum of broadcast, Willimon, Fincher, and Spacey have the luxury of knowing exactly what it is they’ve committed to doing and how long it will take to do it. Their House of Cards is a finite story, freed from the vicissitudes of fate, fortune, and message boards that can hamper (and, occasionally, help) a series. And that certainty is very much evident. The production is gorgeous, the performances pristine. Nothing feels out of place, but nothing feels particularly vibrant, either. It’s the sort of unflappable cool we see reflected in Frank Underwood, whether he’s licking barbecue sauce from his fingers or dabbling with treason. “That’s how you devour a whale,” he announces at one point. “One bite at a time.” Which is all well and good. But the thing about House of Cards &#8212 and Netflix’s strategy in general — is that it’s barely giving us time to chew.