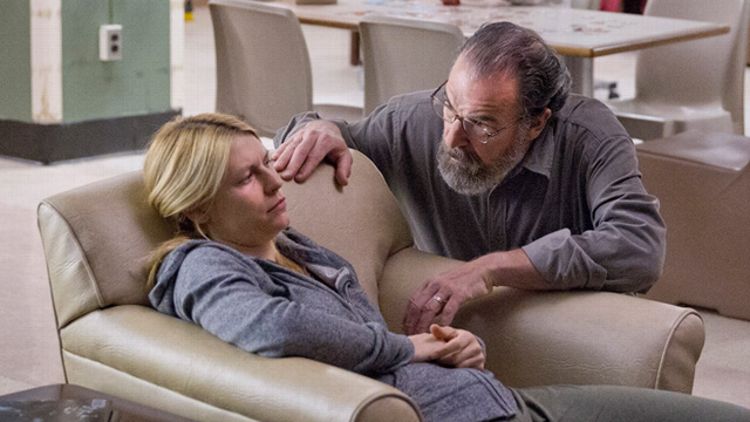 If Homeland‘s title had ever intended to double its length, I’d always assumed the missing word would be “security.” But two seasons and two episodes in, I now think “stability” is a better fit. In a country as big as ours and with psyches as damaged as the ones belonging to these protagonists, stability seems like a much more workable objective, something more pliable and forgiving than the all-or-nothing implications of security. After all, when do you know something is truly secure? When it has been tested? Or after it has failed? In matters relating to both bureaucracies and mental health, a status quo is much preferable to any sort of dramatic swing — regardless of the direction.

And yet, after two installments of this treacherous third season, stability continues to seem well out of reach for all involved. Carrie in particular has devolved into the hottest of messes. After Saul threw her under the wheels of the Senate bus, she spent the opening moments of the wonderfully titled “Uh … Oh … Ah …”  bursting into his home in search of … well, it’s not quite clear. Revenge? The last word? Yes, Carrie’s bipolar, but her real weakness is her tendency toward binary thinking: Those who aren’t with her are immediately assumed to be against her. The only gray area she ever tolerated was the one she found between the sheets with Brody. In lieu of foreign enemies, Carrie has now settled for domestic ones. (I guess it helps that Saul will never pull an Abu Nazir and confuse things by shaving.) After freaking out Mira, Carrie headed straight to the de-mothballed set of All the President’s Men in order to suicide bomb herself in the most spectacular way possible.

Ultimately, her honesty IED was smothered by some cops — and by her interlocutor’s super odd choice of conducting a clandestine interview from the profoundly insecure confines of her cubicle. (Maybe she was stuck waiting for Seamless?) And I have to say, I once again found myself confused about my own loyalties. Last week, I was on Senator Lockhart’s team about the long-term viability of a spy agency that allowed an admitted terrorist unfettered access to the halls of power — not to mention the bedrooms of certain unstable spies. I’m nominally a journalist and normally all for truth and leaks, but this felt like an uncomfortable gush. Carrie telling her side of the story isn’t necessarily the same thing as evening the score.

And while Carrie may feel that the drugs “dull” her thinking, they’re clearly even more catastrophic to her doing. In her chosen field, knowledge — whether accurate or not — is power. But the only person her strident Trutherism is hurting is herself. What’s particularly jarring is that I don’t even know why clearing Brody’s name is her no. 1 priority — especially since Saul and his black-ops buddies just cleared the decks of all the people behind the people. After all, the guy with the bomb in his trunk isn’t nearly as interesting as the guy who put the bomb in the trunk. Isn’t the public perception of Brody that he was, at worst, a patsy? And, intentions aside, isn’t that kind of the truth? Why should Carrie fall on her sword to save a doormat?

Either way, she’s tripped up — and then chained to a hospital gurney, all part of her plan to reach the sarcastic nirvana that is being absolutely “fucking Zen.” I’ve said it before and I’ll say it again: No one plays the physical and emotional toil of having your last nerve worked like Claire Danes. But to my eyes, she was nearly as hung out to dry by the script as Carrie was by Saul a week ago. Plumbing the bottom of Carrie Mathison’s emotional and professional life seems to me to be an increasingly shallow well, though the novelty this time is that she has been completely and utterly abandoned there. (I guess Peter Quinn came to check on her, which was nice. I can believe that these two ginned up a respectful relationship during the long hours of surveillance last season. But nearly all of those hours happened between episodes. It’s a little odd that I have to fill in those blanks myself.) I suppose the other benefit of Carrie’s latest ruin was the way it augmented the intensity of her isolation. Homeland‘s writers seem committed, at least for one season more, to making this show a two-hander. Nothing highlights the oddness of Brody’s absence more than the sight of Carrie one-hand clapping her head against a psych ward wall. I never bought the two of them as soul mates in the past, but at least now, when they’re inevitably reunited, they can compare notes on being utterly discredited and abandoned by the institutions that formed them.

But I wish it weren’t so. Carrie’s life is necessarily twisty but it’s dear, beloved Saul who is truly tied up in knots because of it. I fear that in the haste to increase Mandy Patinkin’s screen time something essential about his character may have been lost. I have no trouble with the revelation that Saul’s loyalty lies with his beloved agency, not with one particular, prickly agent, but the severity of it has been tough to swallow. Surely there were easier ways to let Carrie down than by lowering her to the wolves on national television? Last week Saul admitted to Mira that he was not “temperamentally suited” to his new position, but he eliminated his surrogate daughter more ruthlessly than he did any of the six Al Qaeda–adjacent targets on his hit list. Last night, he tried to make things right but all he made was a hash of everything. Carrie, the CIA’s most devoted agent, is now committed, prompting Peter Quinn, a guy who just shot a kid, to announce, “I don’t know what the hell we’re doing.” When a government assassin draws a bright moral line against your actions, it might be time to stop stroking your beard and take a good, hard look in the mirror instead.

Still, it wasn’t the Carrie mishegas that best summed up the promise and peril of Homeland‘s nascent third season. It was the business with Fara, the hijab-clad banking specialist introduced last night (and played by the IRL fascinating Nazanin Boniadi). Homeland is a show desperately in need of fresh blood, so her appearance would have been welcome regardless of her wardrobe. But one of Homeland‘s greatest strengths is its ability and willingness to force discomfiting questions to the surface: Fara is a Persian American patriot, a Muslim survivor of a vicious, Islamist attack. The show deserved enormous credit for the delicacy with which it treated Brody’s religious conversion — we were shown the beauty and appeal of Islam; it was never directly connected to his desire for anti-American vengeance — and there’s another opportunity to gently mine similar ground here.

Instead, sweet Papa Bear Saul trampled all over the situation with all of the grace of a feral grizzly. His vicious diatribe at a new underling was both shocking and weirdly tone-deaf. “You wearing that thing on your head is one big ‘fuck you’ to the people who would have been your co-workers,” he fumed. “Except they perished in a blast right out there.” Now, look, do I believe that someone in the CIA — real or fictional — might feel this way when asked to work with someone who looks and dresses like Fara? Sure. But not Saul. Anybody but Saul! This is a man who says the Hebrew kaddish over dead Qaeda operatives, whose fundamental decency is the fulcrum upon which Homeland‘s mood swings. I didn’t buy his hate speech as aggro motivational technique, even though Fara really did wind up with a functioning plan. (Though, to be fair, a plan that was goosed by Quinn camping outside the 1 percenter steakhouse — tonight’s special: tomahawk chops seasoned with the salty tears of poor people! — and unleashing his best Christian Bale Batman voice.) And I especially didn’t buy it as effective management. Is Saul really such a monster that he’d make a subordinate — regardless of her outerwear — cry? I hadn’t thought so, but now I’m not so sure. I treasured Saul as a stubbornly analog spy in a cruelly digital world. Now he’s just an HR rep’s worst nightmare.

I suppose there’s a way to consider all of this as necessary aftershocks to the blast that ended Season 2. Everything in Homeland‘s universe has been fundamentally changed by what happened at Langley; if I’m finding some of these changes to be off-putting and violent, then there’s a distinct possibility that that’s exactly the point. Still, the one area where I wish real change was being enacted is in the smoking crater formerly known as the Brody home. I actually quite liked the therapy scene, in which Jessica used her daughter’s shrink with the same revealing cluelessness once demonstrated by Betty Draper over on Mad Men. The quibbling over “infamous,” the dark-stained reality of Jessica scrubbing Dana’s blood out of the grout … these moments tapped into something rough and real lurking beneath the glib surface of things. I wrote last week about how Dana’s determined suicide attempt is an awful mirror held up to her own father’s wavering back in the vice-presidential bunker. And her ensuing mental state could provide an opportunity to reflect something of the show’s other committed zealot, Carrie. After all, the same questions apply to both women: What is healthy? What is sane? Can we medicate ourselves? And, if so, who decides when we’re better?

But Homeland, at least so far, doesn’t seem to be interested in pushing us down this windy road. Instead, it’s accelerating down an all-too-familiar teen-angst highway. That the show is spending a good deal of the early going on Dana’s love life isn’t necessarily a problem. It’s that it seems so committed to having her be actually in love with the sort of beautifully broken boy child that used to be limited to Avril Lavigne videos. After Dana Say Anything–ed Leo in the rain and then made passionate, pure love to him on a pile of pristine white sheets, I can only hope there’s another Doc Marten yet to drop in this story line. (And let’s hope that when it happens it does so on her father’s used prayer mat — the rediscovery of which was by far the most provocative image of the hour — not on an anthill of soiled sex towels.) Dana’s jumbled, troubled mind-set doesn’t suggest someone who can be saved by romance. It suggests someone who, like her father, may be damaged even further by mistaking opportunity for fate. It’s early going still; not only have the chess pieces not revealed themselves, I’m still not exactly sure what game we’re playing. But so far Homeland this season is too much “Uh-oh,” not nearly enough “Ah.”