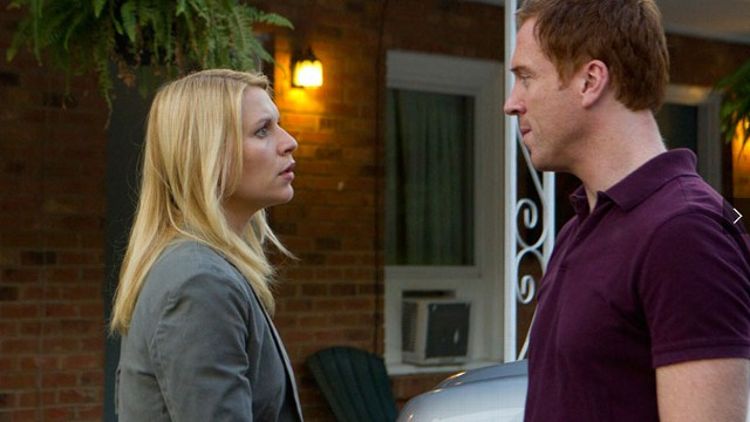 Homeland is rightly lauded for many things, but humor is rarely among them. To be fair, topics like terrorism, mental health, and the unhygienic, lonely smearing of peanut butter onto crackers are not the stuff great comedies are made of. But was I wrong to see a few tendrils of winking good cheer peeking out from the cracks of what was otherwise a desperately tense hour? The first giveaway was the title: Last night’s episode was called “I’ll Fly Away,” which, yes, helicopters. But “I’ll Fly Away” was also the name of a critically adored NBC drama that aired two decades ago and gave Homeland writer Henry Bromell his start. (I’ll Fly Away starred Regina Taylor as an African American maid and Sam Waterston as a liberal-ish Southern gentleman at the dawning of the civil rights era; forget the golden age of cable, you couldn’t get such a high-minded series on the air today if Waterston also sold meth and Taylor moonlighted as the mother of dragons.)

And then there was the year-in-the-making moment in the motel with Carrie and Brody, during which the secret agent once again tapped that asset. But just as the law-crossed duo went all the way, so too did the show with its sick commitment to surveillance. Back in the underground HQ, lascivious Quinn and poor, pained Saul had to listen to every naughty thing their undercover agent did under the covers. (And above them. And on the armoire.) This wasn’t the CIA, it was TMZ. Tawdry, cheap, and invasive, it felt like the natural bottom of what has become a disturbingly intimate investigation, one in which privacy is a myth, motivation and emotion have become impossibly intertwined, and it’s no longer clear when someone is fucking with someone or merely fucking. It was so preposterous and inevitable that I was relieved when Saul could find nothing to do in response to the grunting and thrusting — not to mention Quinn’s itchy finger on the volume knob — except laugh. Well, he didn’t really crack a smile, but I’ll tell you, Chip Johannssen and the rest of the writers were having a high old time.

Consider, if you will, Saul’s mid-coital dialogue: “It is premature.” Tell that to the Congressman! “Brody is our only entry point.” That’s what she said! And my personal favorite, “There is a fucking attack coming!” That’s not the only thing that’s imminent, pal! Did Alex Gansa subcontract part of this script out to Henny Youngman? (Be sure to tip your mole, folks!) It certainly didn’t help that the great Mandy Patinkin’s performance in these scenes was almost a carbon copy of Bill Hader’s parody of him on Saturday Night Live a week ago, blurring the line between patient and painful. “All she’s asking for is time,” he deadpanned to Quinn as the sound of Carrie asking for considerably more filled the air. “Give her some.” (Rim shot!)

But here’s the thing: I applaud Homeland for owning the absurdity! Since the very beginning the show has attempted a very delicate balance: It’s a series about global issues refracted through a hyper-focused, personal prism. There are plenty of terrorists, but precious few true believers. (It’s important to note that Brody is a proud Muslim but it was revenge, not the Koran, that nearly had him detonating the Vice President.) On Homeland, people are motivated to do bad — and then worse — not necessarily by dogma but by desire. It’s not just Carrie who can’t help herself from, in the immortal words of T-Boz, chasing after waterfalls. None of the players here are particularly political, they’re all just in thrall to more primal passions. Brody is desperate for respect and validation. Estes and Walden covet power. Aileen wanted to piss off her old man. The Saudi consul just craved some private playtime in the bathhouse. If Homeland felt soapy last night it’s anything but unearned: These people are all stuck living their own private soap operas! A furious Estes summed up the predicament quite well when he declared, “I don’t want to be the one standing in the front of the Senate explaining who Carrie was fucking when the bomb went off!”

That inescapable suds is the primary reason why I’m willing to buy the show’s chanciest revelation to date: that Abu Nazir, the most wanted man in the Western World, has arrived somewhere in the Virginia countryside. Now, it’s absolutely possible that the Border Patrol simply didn’t recognize his freshly shaved face. After all, the U.S. government seems to have pinned the entirety of its homeland security apparatus on the pillow talk of one bipolar permalancer. (I appreciate a rollicking plot as much as the next guy, but I wouldn’t be against five to 10 minutes devoted to Carrie’s current employment status, would you? Let’s hope the CIA’s health plan accepts pre-existing conditions.) But all questions of efficiency or plausibility aside, Nazir’s appearance is good for the show, not merely Navid Negahban’s awards consideration reel. His evil plot may still be unknown, but it is no longer an abstraction. Until now, Nazir’s violence was twinned with that of Vice President Walden; one hid behind suicide bombs, the other behind drone strikes. The arrival of Nazir suggests that his actions truly are as personal as everyone else’s. I’m not sure if this makes whatever he’s up to seem more sympathetic, but it’s at least in keeping with Homeland‘s skewed morality: Everyone does his or her own dirt and then, more often than not, is forced to wallow in the consequences.

That’s certainly what happened to Dana. One week after being crushingly disappointed by her father — perhaps permanently so — she seeks refuge with a sturdy surrogate. Thanks to Mike’s steady hand in the kitchen (spaghetti and eggs! Living the bachelor condo dream!), Dana’s lessons weren’t all lousy. The realization that her father’s return hurt Mike in unspeakable ways and the knowledge that Carrie’s appearance at the police station shouldn’t be used as a weapon against her unraveling mother suggest that Dana is growing up. She’s far from an adult, but she seems to be crossing through the valley of the shadow of teenagehood all right. But some things require more maturity than a 16-year-old can handle.

Mike stepped away from the Brody family because it was “right” — but ultimately, right for whom? That’s the question that the dead woman’s daughter hurls back in Dana’s face. It was a ferociously uncomfortable scene, Morgan Saylor’s face breaking in true Claire Danes fashion as the daughter berated her: “Trying to take responsibility? What does that even mean?” “Doing the right thing” is absolutely meaningless, on Homeland and, often, in life because it suggests that there’s one truth and one course of action in any given situation. Dana stood there, mutely, expecting what? A reward? A hug? Forgiveness? The hush money’s been spent and a life’s been extinguished. No bravery in the world can change any of that.

Even so, Dana’s rude awakening was child’s play compared to the murk of Carrie and Brody. In terms of surrogate dads, Saul got it much worse than Major Mike ever did. No father — and certainly no beard — should ever be spoken to the way Carrie bristled at Saul. Particularly when he’s acting like the world’s kindest patsy. (“It’s OK now?” he asks, blandly, after Carrie walk-of-shames her way back to HQ. Uh, Saul? Were you listening last night? To quote Brody last week: “None of this is fucking OK!”) Carrie and Brody are never more turned on than when they’re on the run from the entire world. Free from all the handlers, their season-long subtext spilled into the open. Carrie really is in love with him. Brody really is a broken man underneath all the lies. Is the implication meant to be that Carrie cares more about Brody than stopping the attack on America? Or just that she’s incapable of being invested in something that’s not in some way about her? I genuinely felt for Quinn when he was yelling into the walkie, demanding Carrie confirm a direct order and get back in the car. Yeah, dude. Good luck with that. Carrie’s emotional recklessness is both her undoing and her doing. Telling her to stop now is like the frog asking the scorpion not to sting it.

Looking at Brody’s dead eyes at various points throughout the hour, it was clear that he wasn’t lying when he admitted to a little nostalgia for his days at the bottom of an Iraqi spider hole. Carrie refers to their double-agent/immunity deal as a “way out for both of us.” But even before Brody was shoved into a chopper at gunpoint it seemed pretty clear that he knows there’s no way out for him. Not this time. I don’t think Brody loves Carrie any more than a drowning man loves a slowly leaking life preserver. Yes, she loves him, but what matters more is that she needs him, now more than ever. She needs Brody the same way Nazir needs him: as a powerful, twisted-up symbol representing personal losses and professional dreams. Call me cynical, but I have a sinking feeling last night’s fugitive motel sex is the closest any of them will get to satisfaction.