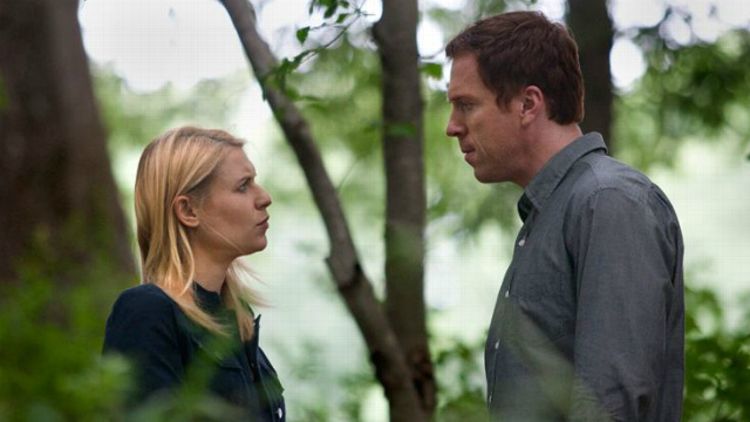 Exactly one year ago Homeland aired its seventh episode. Titled “The Weekend,” it marked the moment the freshman series went from good to great. It happens that way sometimes, in TV, when the panicked crush of production finally catches up to the promise of the pilot. I’ve heard it described variously as a show finding its voice or, more anthropomorphically, the show revealing how it should be written. Regardless, it’s as if, in an instant, the writers find depth in the material they hadn’t even realized was there. For the audience, the feeling can be delirious and disorienting. It’s like taking a step into the deep end of a pool: Suddenly there is no bottom; suddenly anything is possible.

In the case of “The Weekend,” it was the backwoods tango between Carrie and Brody that got all the ink. And rightly so! It was hypnotizing to watch the two leads dip in and out of honesty — and each other — like bags of Brody’s precious Yorkshire Gold into mugs of hot water. The hour provided the rare opportunity to watch both actors and characters losing themselves in the best roles of their lives. But my favorite part of “The Weekend” was its b-story: Saul’s long, intimate road trip with Aileen Morgan, the bloodthirsty blue blood. In direct contrast to Carrie and Brody’s teetering Jenga tower of lies, these two presented a simple binary: Saul needed the truth, Aileen wasn’t talking. And so they drove on, watching the odometer click in silence, two pawns in a global game sharing a ride but going in very different directions.

Like his colleague Carrie and his occasional target Brody, Saul’s professional existence is defined by secrets — but he himself is almost monkishly straightforward. While Carrie and Brody lolled about the lake house, pawing at each other’s damage like cats with half-dead mice, Saul, ever patient, was Aileen’s confessor and her therapist. He was part clergy and part Charon, ferrying her from the mess she’d made of her life — missing the moment when her youthful politics became blinkered radicalism, mistaking her youthful crush on Raquim Faisel for a violent, romantic metaphor — to the harsh life sentence that awaited her. It was a necessary and methodical counterweight to the dirty-bomb-style spy games preferred by Abu Nazir and, in a way, the emotionally explosive Carrie Mathison. Stooped by the weight of the world, Saul Berenson doesn’t play to win. Really, he doesn’t play at all. If David Estes’s job is to keep things covered up, Saul’s quiet, dignified mission is to bring things into the light.

Last night, Homeland aired the seventh episode of its second season. Titled “The Clearing,” it was very much a spiritual sequel to “The Weekend.” Like its predecessor, it was written by the gifted Meredith Stiehm and concerned a weekend in the country. Once again, Carrie and Brody found themselves Frenching amid foliage, turning each other on by toying with the truth. (What is it with these two confusing proximity for intimacy? I guess it makes sense to cling to someone stuck in the same boat. But drowning is drowning whether you do it alone or together.) And once again Saul accompanied Aileen Morgan on a critical, one-way journey. There were no gunshots this week, no staggering reveals or reversals. We know no more about Nazir’s dastardly plot than we did back when the tailor of Gettysburg was still sewing cuff buttons, not pushing up daisies. Even so, I think this was my favorite episode of Homeland so far this season. Like “The Weekend,” it reminded me that the very best television shows aren’t merely plot-devouring carnivores, moving relentlessly forward in search of more. Despite its frantic, paradigm-changing pace, Homeland still has room to double back, to square the circle; to sink deeper into the pool, like Brody and all his scars.

That swimming pool, the one at the center of Rex Henning’s sprawling compound, was just one of the many flawed, would-be safe havens spread throughout the hour. There was Roya and Brody’s staged encounter on the jogging trails and Dana and Finn’s hissed whispers by the picnic tables. There was the titular clearing where Carrie and Brody clinched. And, most heartbreaking of all, there was Aileen Morgan’s dream of “a cell with a view.” It’s all any of these patsies can hope for, really: a prison where they can at least see what’s coming to finish them off. From the very beginning, Homeland has argued that privacy was the first casualty of the war on terror. “The Clearing” took that argument to a new, more cynical place: It’s not just that privacy is a goner, it’s that our private selves — our best, true selves — are just as irrelevant.

To my mind, the key line last night was Finn’s sad, older-than-his-years good-bye to Dana: “This is why I liked you so much. ‘Cause you don’t know how it goes yet.” It was easy to assume that Dana’s experience in the hospital last week shook the innocence right out of her, but clearly that’s not the case. Behind the deadly mistake there still exists a bedrock belief in institutions; a confidence that she lives in a morally black-and-white universe where her parents are trustworthy and choosing to do the hard, honest thing will make everything right, or at least less wrong. But that’s not the way the world works — not the one she’s now inhabiting, anyway. There was something so chilling about watching the more experienced Finn drain the dregs of other people’s drinks. He never seemed particularly worried about what their confession would bring; he was merely resigned. With good reason: His mother — well played by Talia Balsam, a.k.a. Mona Sterling on Mad Men a.k.a. Mrs. John Slattery IRL — is every bit her husband’s equal when it comes to parsing collateral damage. One gets the sense that Dana would have been able to accept her father as an America-hating terrorist more easily than as the political waffler he’s become. At least a terrorist has convictions.

But don’t blame Brody; he was busy getting the same rough lesson as his daughter. The writers have put the guy through the wringer the last few weeks, but there was still one reckoning left on the table: with himself. Brody tried to be honest with his host — “I was captured and shoved in a hole. All I did was not die” — but to his amazement his words no longer matter. He’s become the same puffed-up symbol at home that he was in Abu Nazir’s compound. It turns out that Rex, like Walden with his son’s homicidal hit-and-run, will never let truth get in the way of a good story. Nothing Damian Lewis has done to date affected me quite the way his moment of recognition with Carrie did. “That guy is the man I could have been,” he said, as if he ever had a choice that didn’t involve an unmarked desert grave. Still, for the first time, he’s admitted the black hole of weakness and fear inside of him. But a moment later, he’s embracing that emptiness by embracing Carrie — and all of her comforting manipulations. “I do feel used. And played. And lied to,” he declares. “But I also feel good.” (As for Carrie, despite her myriad problems, I don’t think she’s ever had any illusions about her willingness to do and sacrifice just about anything for her cause. Or, as a gut-shot, pill-popping Peter Quinn put it, it’s not like she’s never “seen a dick before.”) It’s Veterans Day and we’re meant to spend time honoring those in the armed services. Brody’s sad predicament is a reminder that we should perhaps focus more on the men and women, and less on the uniform.

And then there’s Aileen. This entire story line slayed me. Beautifully directed by John Dahl (The Last Seduction) and even more beautifully played by the great Marin Ireland, every soul-killing moment of the former Mrs. Faisel’s captivity was brought palpably to life: her sallow face, the weight of the chains, the beautiful, faraway glare of the outside world. As with Brody, radical terrorism made sense to Aileen in theory — when it was connected to flesh-and-blood people, people she loved and cared about, why wouldn’t she go to great lengths for a lofty cause? But a funny thing happened to both her and the good sergeant: They didn’t die. And now, unlike Brody, Aileen has no remaining value. She was either a martyr or nothing at all. Trapped in a monotonous, unglamorous purgatory, she’s all used up, despite the fact that she’s still breathing (and, apparently, spitting, hitting, and shitting).

Saul’s tenderness toward her was affecting and genuine, and it made me even more frustrated with those who insist that such a decent, kindly man is the much-hyped — and then mercifully forgotten — CIA mole. Let me be clear: Saul Berenson is more likely to be revealed as a mohel than a mole! (The apparently not-dead Galvez? Well, maybe. But I continue to think that those watching Homeland looking for traitors are doing it wrong.) Saul’s no patsy: He’s the one who put Aileen in that cell. But he doesn’t want her to needlessly suffer in it, either. Bringing her wine and cheese came from the same place of dignity and decency that caused him to say the kaddish for the Al Qaeda guard last year. It wasn’t suspicious; it was humane.

That Aileen then used his glasses to take her own life was a cruel twist, one of many likely still to come. Saul wept not solely because of her passing — she did manage to thank him for “the best last day” she could have — and certainly not because, as he told Quinn, he had become “sloppy” and “emotional.” (I’ve seen sloppy and emotional, and it involves Carrie Mathison tongue-kissing an asset in the Virginia underbrush.) Saul’s tears were for what happened to Aileen long before she slashed her wrists, what happens to everyone eventually once they find out, in Finn’s words, “how it goes.” (“I’m sorry I’ve become this person,” Aileen cautioned. “But I have.”) While Carrie fights to stop future acts of terrorism, it’s left to Saul to mourn for all the horror that’s already occurred. On Homeland, everybody and everything gets scarred eventually. And as Brody put it in front of the police station: “None of this is fucking OK.”