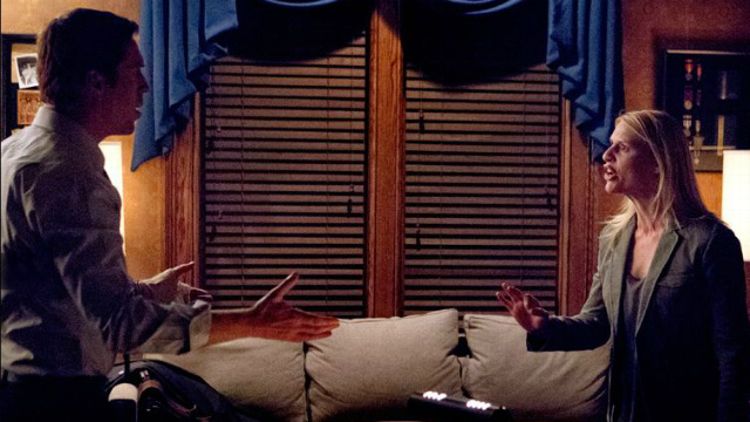 In fine-dining restaurants — places that serve the sort of thing that wouldn’t interest Carrie Mathison (i.e., food) — it’s traditional to serve a tart sorbet or granita as a palate cleanser. It’s a way to bridge the gap from one set of rich flavors to the indulgences still to come. It could be that I was merely hungry, but the thought did cross my mind that “A Gettysburg Address” was just that sort of intermezzo. Even a show like Homeland, which, in its riotously paced second season, has been binging on plot like a stoned sumo wrestler, has to ease back now and again. The delicious surprises of the past two weeks would be ruined without proper time to digest them.

Does that mean this was a lesser episode? Not necessarily. There was still much to savor, much of it in the form of the suddenly resurgent spy games. Two weeks ago, before Carrie dropped a bag over Brody’s head, flipping our expectations in the process, I wrote how I was fully prepared to enjoy the more traditional surveillance story that seemed on tap. I liked the return of Virgil and his long lens, the grimy, Wire-esque HQ, and the fun, friction-filled banter with temperamental cheesesteak-eater Peter Quinn. So while the target was no longer Brody, I liked that Homeland’s fallback setting still worked. If you strip away the probing psychodrama and the risky, high-wire script acrobatics, this is still a damn good undercover show, all furrowed brows, cats and mice and microphones that never seem to work when you need them to. Between last season’s bombing and this week’s fatal assignation, I’ll never look at fountains the same way again. (As for the continuing adventures of Encyclopedia Mike and his limping sidekick Lauder, the bearded blunderer, I’m less interested. Corporal Cuckolder may be a better man and a better match for Jessica than Brody is, but he’s certainly not a better character.)

And the aforementioned psychodrama was still bubbling away, too, if slightly off the boil. It was reassuring to see that Carrie and Brody, one week away from their tear-streaked session of tantric truth-telling, returned to their sexy, skeptical best. After all, people this comfortable with professional deception can’t just spit it out like a fistful of pills. Brody may be bruised, battered, and totally head-fucked, clinging to whatever fictions are on offer in order to stay sane (Nazir is my friend! Jessica is infinitely patient and understanding! Handguns are always welcome at a cookout!). But that doesn’t mean he’s not aware of the manipulation he’s choosing to submit himself to. “What is this? Sex? Understanding?” he spits at Carrie when she quite literally leans on him in order to get some intel about Roya. Outside of their blissful bonkfest in the cabin in the woods, nothing about their relationship can ever be private — and it still seems to me that they prefer it that way.

Brody’s campaign of honesty lasted approximately zero minutes, beginning last week with the half-true story of his collaboration with the CIA and continuing last night with the totally false assurances about how Carrie is both on the outs and out of her mind. The fact that a faux-resumption of the world’s most ill-advised affair is the best possible cover story says volumes about how messy and messed up the situation is. And Brody seems to get a Chris Matthews–like thrill up his leg from the illicit insanity of it all. I guess when a sleeper agent has spent that long in the cold, he’s desperate to come in to whatever warmth will have him. And it helps if said warmth is offering a way out of the electric chair.

As for Carrie, maintaining a healthy distance appears as likely as maintaining a healthy diet. She seems as obsessed with Brody, the asset, as she was with Brody, the threat. To be fair, as Saul and Quinn correctly point out, he very well still could be a threat. (From the very beginning, Homeland has always been stingy with revealing what Brody actually knows at any given time. The Marine One–Marine Two foxtrot seemed to arrive fully formed from nowhere last season.) But now that Carrie has her mojo back, she seems to be overly trusting of her gut — or wherever it is that Brody’s piercing eyes manage to reach. She and Quinn were both right about their newest agent. Him: “The guy’s a fucking mess.” Her: “I think he’s all we’ve got.” But Carrie may have been talking about her personal life, not their mission. It was telling — and worrisome — the way she crumpled into his arms at the end of the hour. She needed a shoulder to cry on more than a traitor to blame. To quote Brody: What was that? Sex? Understanding? Despite the dead bodies in Gettysburg, I have a feeling Carrie doesn’t much care.

(About the Pennsylvania commando raid: Hmm. I was on safety pins and needles the whole time, assuming the tailor’s place was rigged to blow. I mean, the guy made bombs. Why was the CIA lazily browsing the racks like it was a sample sale at Today’s Man? And then the sudden appearance of jackbooted thugs opening fire on government agents suggests Homeland is about to take the same risks with the size and scope of its action as it just did with its characters. Also: Does this finally put to bed once and for all the tiresome “Galvez is the mole” chatter? Who cares about a mole, especially a dead one! Double-also: Peter Quinn’s whole “take a bullet in the stomach and play dead” trick is something they teach all children in Philadelphia. It’s a skill that comes in handy when rooting for an Andy Reid–coached team for over a decade.)

But to me the most striking part of the hour focused on the most controversial plot. Last week’s ill-fated joyride caused many a commenter to worry that Dana Brody’s burgeoning relationship with Finn Walden was in danger of veering into Kim Bauer/mountain lion territory. (Plus: Finn Walden? Is there a public website that generates barely plausible names from great works of American literature? I’d be into Sawyer Portnoy. Or Huckleberry Gump.) Since we don’t yet know the full impact of their hit-and-run, I’m preaching patience. Homeland has previously shown the ability to make fascinating lemonade out of seemingly clunky lemons. But the real reason to stick with this story line, even if it goes wobbly, is its star, Morgan Saylor.

I’ve written before how Homeland’s showrunner, Alex “Abu” Gansa, has demonstrated a smart tendency to steer his show toward its strengths. And the development of Saylor as a performer has to be near the top of that long list. In direct contrast to most young actors, Saylor underplays nearly everything; her lack of ego and intensely reactive face have created a character with real depth, one that also manages to feel like an actual teenager, not an eye-rolling repository for the saved-up snark of cynical thirtysomethings. Her performance in the hospital contained some of her best work yet; to watch her eyes throughout was to witness a real-time dissolution of childish hubris and affected attitude. But there was something else relevant amid this rough education about the reality of life and death. When it came time to own up to her own culpability in the viciousness of the world, Dana proved she was her father’s daughter: She lied.

This moment, along with Dana’s increasing prominence, got me thinking a lot about the importance of her relationship with her dad. Obviously, it was their deep connection that talked him down off his suicidal ledge back in the bunker. But it’s not just that Brody loves her, it’s also about recognition. When they address each other on the car ride to school, it’s not as father-daughter, it’s practically as equals: “Are you OK?” “Are you OK?” (In a neat touch, they both answer with the same lie.) And it could not have been a coincidence that Brody’s skullduggery with Roya was filmed exactly like Dana’s confrontation with Finn: all whispers and furtive glances, a strong desire to hide the conversation from the gossipy ears that surround them. The CIA is just like high school, says the logline from a future CW show, only the backstabbing is done with real knives.

Teenage years are defined by a strong, almost contradictory desire to brand oneself as an individual by aligning with something larger: think going goth or pledging emo. At that flexible age, the cozy, welcoming confines of a preexisting ideology can provide a safe space within which to figure oneself out. It’s also why Dana was able to flit from Xander to Finn (these names!) without missing a beat. But it also reminds me of the seemingly effortless transition Brody made from hating America to serving it again. The most dangerous aspect of this once (and future?) terrorist is that, on a base level, he’s as immature and unformed as his 16-year-old daughter. Both are in desperate need of a sturdy, adult voice to relieve the pressure of existence simply by telling them what to do. Dana runs from the truth and agrees to support a lie because she’s a child and she has a terrible role model at home. What’s Brody’s excuse?