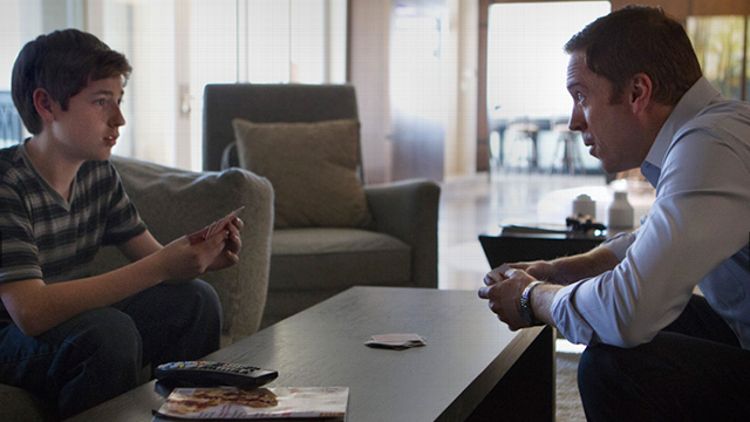 A month or so back I paid a visit to the Homeland set in Charlotte, North Carolina. I’ll be writing more about my time there later this week, but I thought it was worth mentioning now since the scenes I watched being filmed all aired last night. Due to the choppy nature of TV shooting schedules, I had no idea just where the puzzle pieces I observed fit — I watched Claire Danes talk on her cell phone and get in her pre-crashed car over and over again for about an hour, leading me to assume the dramatic kidnapping was the episode’s cliffhanger, not the inciting incident. I spent time with a mopey Dana and Finn on the roof and a frantic Saul and Virgil on the street, yet had absolutely no sense of what the hour was about or where it was heading.

But, in retrospect, I should have paid more attention to Danes’s slight eyebrow raise when she said to me, between takes, “towards the middle of the season, it suddenly becomes more Action Jackson, which is a little out of character for the show.” A little bit, yes! “Broken Hearts” was easily the weakest episode of Homeland this season, possibly the weakest overall. But that in and of itself isn’t that noteworthy: All of the greats (hell, even all of the very-goods) have off nights. And, from a process standpoint, one of Homeland‘s biggest strengths has been its ability to make the most out of the bad situations it frequently puts itself in. (I recently watched the outstanding documentary Senna, about the late Brazilian race car driver whose legend grew from the way he rebounded from overly aggressive crashes, thus conveniently forgetting the way he would crash in the first place.) Which is to say: The season isn’t over and there’s still plenty of time to pull Carrie’s Corolla out of the ditch. But there’s no denying that the particular ways in which “Broken Hearts” went off the track are reason for concern.

I suppose it was odd (but not all that unlikely, for an optics-obsessed government) that the entire national security apparatus — aided by a fawning media — had started sucking each other’s Popsicles after last week’s half-successful raid. (Estes: “I am personally looking forward to at least several martinis!”) But there were an awful lot of eyes being taken off a worrying amount of balls: With the world’s most wanted terrorist running amok in American convenience stores, corrupting his eternal soul with Big Gulps and Andy Capp Hot Fries, should Carrie really be fiddling with her jazz presets unattended? (Pretty sharp work by the CIA determining Nazir “probably” used a fake ID to rent a car, by the way.) And wouldn’t Brody’s direct involvement with said terrorist be enough to keep him on lockdown, regardless of the size of the cyclone currently stirring over the matter of wheat subsidies? But look: This is a show about Carrie and Brody, so it was inevitable that they be drawn back out into the open and back into each other’s lives. From the beginning, Homeland has attempted to refigure global events as personal catastrophes, so there was no way Nazir’s world-shaking plot wouldn’t also involve him taking on the Bill Pullman role in a mid-’90s romantic comedy.

But the great heart attack caper failed on the small stuff and the big picture. I’d be willing to overlook the ridonkulousness of the magic BlackBerry Skyping if it had been deployed in the pursuit of the greater good. (It’s never a positive sign when a show has to invent new technology to service a story. And it’s even worse when a dramatic crescendo depends on Damian Lewis — an actor whose usually measured performance tends to unravel the twitchier he gets — shouting into a smartphone.) But the fatal infarction last night was in the why, not the how. Even at its most soapy, Homeland has always been wonderfully messy. The assassination tango between its two leads was part love story, part psychological power play. The sparks flew between Danes and Lewis because they were so good at blurring the line between the pleasure derived from screwing with each other and the pleasure of just plain screwing. But now I fear that Homeland‘s executive producers have fallen too in love with Carrie and Brody’s impossible romance.

I believe it when Carrie clings to sweet nothings about how good it is to hear her would-be double agent’s voice. But Claire Danes doesn’t do damsels-in-distress, and you don’t need Walden’s novelty-size magnifying glass to see through Brody’s canned knight-in-tarnished-armor act. As the season has progressed, the congressman’s motivations have crossed from vague to nonexistent. The writers’ impossible balancing act — breaking him down while maintaining an air of dangerous mystery — have left him frustratingly blank. And no amount of eye-popping anguish can sell me on the idea that Carrie’s safety is the only thing in the world he cares about. I’m more inclined to believe that he cares about nothing: There’s no longer any ideology to bind him, his family members are now hollow ciphers reduced to self-aware gags. (I actually liked that Brody couldn’t even be bothered to finish his Hearts-to-Hearts time with his zero of a son. As the dying VP gasped: “Fuck your family!”)

So when Nazir’s techie filed the murderous TPS report (something that maybe kinda could happen IRL, BTW) and Brody’s eyes went empty, it was actually the first time he’s seemed present all season. “I want to feel clean again,” he exploded as Walden expired, interesting words for a man who’s strayed from every structure that once kept him sane, including his Muslim ablutions. I get that Brody’s villainous act needed to come burdened with some halfhearted heroism, and I appreciate that, in the end, it was more frustration than fanaticism that kept him from calling for a doctor. But don’t tell me that Brody loves Carrie when really he just hates everything else.

It was especially aggravating because there are so many other love stories here worth ‘shipping! What about Carrie’s seemingly discarded love of country? Or restored love of her own abilities? Her Socratic debate with Nazir about sports clubs and centuries-long struggle was valiant but flawed. I was more curious about the effect of this confrontation, not its context. Carrie’s spent her entire career pursuing this man, and to him she’s barely worth the plastic used to hogtie her to a pipe. That’s got to sting nearly as much as Brody passing notes with Roya Hammad, no? And Saul’s bookending scenes were the best of the hour by far (particularly the future-seasons-teasing opener in the diner; forget waffles, anytime F. Murray Abraham and Mandy Patinkin get together over breakfast you know there’s some ham on the menu), but his fatherly affection for Carrie has gotten short shrift this year. According to Dar Adal, Saul’s “too sensitive” for this work; if so, what does that make his headcase of a protégée? Unquestioning loyalty is usually a recipe for disaster on Homeland. Estes’s angling suggests that Saul is about to learn that lesson the hard way. (At least those pining for a little mole-on-mole action got some foreplay. Galvez may not heal as quickly as Quinn, but he sure found his phone interesting when Carrie was reporting in about Nazir’s location, huh?)

But in the cool, VP-less light of morning I’m realizing that what rankled me the most about last night wasn’t anything that happened in the episode — it’s been the reaction to it. (Showtime isn’t providing screeners for these last three installments, so I’m writing this after the fact. I haven’t read any other recaps, but tweeters be tweeting.) Look: Shows don’t go bad in a single hour, just like terrorists aren’t turned overnight. Homeland is the same series now as it was five weeks ago, when fans were shaking their thesauruses in search of new ways to say “incredible.” In fact, that episode (“Q&A”) was written by the same man responsible for “Broken Hearts,” Henry Bromell. And, if you squint, it’s more than possible to see the rough outline of nobility in the episode’s failure: how Dana’s numb acceptance of “how the world works” played out for everyone last night. That every relationship is a struggle, and even if you choose to put away the suicide vest, collateral damage is still inevitable.

It’s clear now that the Emmy win and subsequent attention obscured the fact that Homeland is — and always has been! — a potentially very goofy show. Anytime you attempt to craft a cocktail of weepy romantic yearning, gripping spy high jinks, and risky psychological relativism spiked with a splash of Islamic terrorism, there’s bound to be some spillage. (And for what it’s worth, Brody Skyped with Abu Nazir last year, too, something I don’t remember coming up much on the red carpet.)

Even so, it’s been particularly disheartening to watch many of the show’s former fans mutate into a chorus of sneering, self-appointed Mythbusters. If you ask me, it’s probably safer — not to mention potentially more satisfying — to wait until the bandwagon has come to a complete stop for the year before jumping off of it. Last night was unquestionably problematic; Alex Gansa and his staff may have dug themselves into a spider hole so deep not even Brody could clamor his way to safety. But Homeland hasn’t “become” 24 any more than Breaking Bad has turned into Weeds. It’s still the same nervy high-wire act it’s been from the beginning, telling a story about deeply broken people trying to fix the world instead of attending to themselves. Will they stick the landing? I have no idea and, after “Broken Hearts,” I’d say the odds are only slightly better than those of Chris Brody’s beloved Wizards making the NBA playoffs. But as Nazir put it last night, “a man gambles with what he has.” Last night, Homeland pushed all of its hard-earned critical chips into the center of the table. All that’s left for us to do is sit back and wait to find out if it was bluffing.