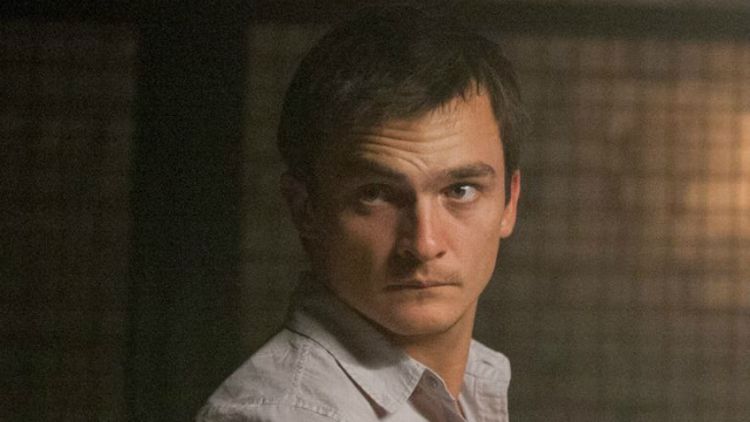 Right up there with buzzkill spouses and eager-to-cuckold best friends, the overstuffed tack board has become one of the premier television clichés of our time. From the steady nobility of Lester Freamon to the neon inanity of Beauty & the Beast, committed characters on all ends of the dial use pushpins, twine, and intuition to puzzle out their show’s greatest mysteries. (Just last week on Twitter The New Yorker‘s Emily Nussbaum suggested a show wholly devoted to the Pinterests of just such a manic protagonist.) The reigning queen of both mania and office supplies is Carrie Mathison, whose color-coded meltdown last season made for great television and a spike in Magic Marker sales.

There’s a tack board in the CIA’s special off-site surveillance dungeon this year, too. It’s a staid and forlorn affair, unencumbered by bipolar rainbows or much of anything, really. For awhile there were photos of the immigrant cab drivers and car-wash attendants unlucky enough to cross Brody’s path, but they were taken down soon enough. As we head into the final quarter of Homeland‘s rollicking second season, I’d wager the only things remaining on the board are photos of Abu Nazir, Roya Hamad, and perhaps one of Carrie’s “Buy 9, Get 3 Free” coupons from the local Wine Depot.

Other than a few stray snaps from Max’s iPhone, traditional spying has fallen by the wayside of late. Dominoes have fallen so quickly these past few episodes that there’s barely been any time — or reason — to purchase much string in order to connect what Saul referred to last night as “a lot of ifs and maybes.” Instead, the fragile connections between theory and reality, between guilt and innocence, between good and evil have been drawn with little more than frayed nerves and yearning looks. On The Wire, Lester used the board to take a step back and consider things rationally. On Homeland, the board has become indistinguishable from the inside of Carrie’s Trapper Keeper: all doodled hearts and leftover pics of the two brooding bad boys that keep her up at night.

Last year, Carrie’s personal obsessions derailed her professional career. Now they’re fueling it. Despite its adrenaline spike, “Two Hats” reminded me that Homeland is as much a procedural as Chris Brody is a compelling character. For all the talk last night of the differences between analysts and field agents (one screws the suspects, the other sniper-rifles them, apparently), it’s clear Homeland‘s fictional CIA has relocated its headquarters from Langley to Peyton Place. How else to explain the fallout from Brody’s abduction? In the 12 hours since the CIA’s lone bulwark against another 9/11 did his best imitation of the evacuation of Saigon, there have been no tangible leads, no “pings” or chatter. All that’s left is a room full of frustrated men looking to Carrie Mathison for either advice or absolution. And as soon as Brody does reappear — frenzied and frantic to have his family protected — Carrie is once again running the point, racing to put foxy Mike in the Brody family hen house and greeting Brody not with operational relief but with a girlish smile. “We need to be extremely fucking vigilant here,” says David Estes just before entrusting the security of the United States of America to an incurable romantic who a week ago was gagging up a fatal dose of lithium. Is he interested in running the CIA or captaining the Love Boat?

Ultimately, what kept me from tipping over the waterfall of implausibility — the world’s most wanted man is wearing a fitted cap somewhere in Maryland and you have time to visit Philadelphia? Nicholas Brody can drive to Gettysburg hundreds of times, wash off murder blood at a gas station and never be noticed, but he’s as popular on the streets of Baltimore as Omar Little? — was the realization that Homeland isn’t about the triumph of emotion over cold intellectualism. It’s about the perils of trusting the heart over the head. Carrie’s behavior these past few weeks has been arguably more crazy and unbearable than when she was off her meds and pacing tracks into her condo carpet. For all her supposed brilliance, we’re seeing precious little of it as she broods and wails like someone in denial, not in charge. I fear she’s headed for a comeuppance worse than what happened a year ago. Yes, she was proved right, but she’s still behaving all wrong.

Ditto Brody, whose intentions are once again highly questionable, thanks to some judicious use of editorial cutting. The flashback he unspools to Carrie & Co. paints Nazir in an ominous, family-threatening light. But that’s not at all what it appeared to be when the two parted: all hugs, kisses, and appeals to the all-knowing wisdom of Allah. (Side note: Is this Abu Nazir’s first visit to the Great Satan? Do you think he has time to do some sightseeing? Try Doritos? It would be a shame to come all that way just to end it all.) Because Brody’s connection to Nazir is entirely emotional, we can’t just assume he’s willing to cut ties and do the right thing. Almost none of the protagonists on Homeland will ever choose reason over feelings. Brody isn’t stuck between the lesser of two evils; he’s deciding between the greater of two passions. Either way, Nazir or Carrie is winding up heartbroken.

While the events crashed and thundered all around us, it was a relief to see Dana still huffing in the corner somewhere. It’s a neat twist by the writers, to establish the teenage character — on most shows, the reliable dumping ground for recklessness and sentimentality — as the eye-rolling voice of reason. Dana is right to snark her way through her family’s forced evacuation: These people are living in a soap opera, not a national security crisis! And while I wholeheartedly support Major Mike’s hijacking of the Brody family — I mean, the man can whip up a mean huevos rancheros — it did seem to me that there might have been a better time for Jessica to debrief him. After all, her husband was supposedly out saving the world and from what she’d been told her kids were in danger from a great deal more than just too many cool big-screen TVs. But as noted counterintelligence operative Woody Allen once said, “the heart wants what it wants.” And hey, his extramarital decisions always seemed to work out just fine!

But for me, the hardest thing to swallow remained the relatively low-key reaction to Nazir’s arrival. Think back to the entire (and entirely flawed) rationale for the Iraq war, that it’s better to “fight them over there than to fight them here.” Can you imagine the psychological panic if Osama bin Laden had been spotted strolling the aisles at Safeway? So it was tough to reconcile the muted reception and minimal manpower with the enormity of Nazir’s presence. In the scene in which Estes sells the Vice-President and a bad-acting Brody on the plan — I kept thinking Walden would almost have to smell the flop sweat on his putative running mate — I was hoping Walden would choose to echo Estes himself back when Saul showed him the suicide video: that this needs to work because otherwise everyone in power is finished forever. And so the actual plan — involving the stakeout of a diner and the desperate hope that Wes Mantooth isn’t listed as a member of Roya’s news team — seemed a little flimsy. If Quinn was willing to put a knife through Brody’s hand, couldn’t they have leaned a little more on Roya? And now that the CIA has shown its cards, hasn’t Brody’s double game been revealed? Either way, our stumbling heroes don’t have Sandman, and now they have even less time. How many more unmarked vans will Carrie have to burst out of, disappointed, before Saul — or, hell, anyone — suggests something better?

That’s why, on this Thanksgiving weekend, I was most thankful for the clever reveal of Quinn and his true intentions. The guy may have the healing factor of Wolverine and the reading list of David Simon, but at least he’s a cold-blooded professional. It was a relief to learn that no matter how many Fishtown cops he knocks up or Oscar-winning actors he pals around with, Quinn is there to clean up the mess created by all of his excitable colleagues. Contrary to Nazir, the emo imam, who believes that “each of us must decide what we can or cannot do,” Quinn long ago gave up any pretense of making his own decisions, probably around the same time he gave up creature comforts like “sheets.” They’re on different sides, but he reminds me of Tom Walker: the perfect soldier because he was willing to follow orders and pull the trigger. On Homeland, the biggest betrayer isn’t Brody, it’s the human heart. And I wonder if Peter Quinn might wind up on top for the sole reason that he no longer seems to be burdened with one.