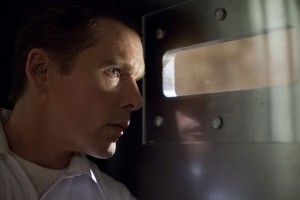 Hey everybody, Ethan Hawke is a movie star! More than a decade since anyone would consider him a traditional box-office draw, Hawke had himself a great little weekend, thanks mostly to his home-invasion horror flick The Purge. Made for just $3 million, it pulled in a hefty $36.4 million in its opening frame. As Forbes explains, that’s “a record opening weekend for an R-rated horror title that isn’t a sequel or a remake.”

Now, some might credit the concept — average reaction: What’s that? On one night a year, all crime is legal?! Yes, here, take my money immediately — or the steady marketing. But I think we know what’s really going on here: Ethan Hawke is aging like fine wine. Consider, for a moment, that his other new movie, beloved art-house trilogy-capper Before Midnight, is racking up dough, too: another half a million this week, for a very respectable $1.5 million pull so far. (Production budget on that one isn’t available on BoxOfficeMojo, but it’s safe to assume it was something like five cases of very dry white wine and four pounds of Greek salad.) And consider the fact that your more traditional “movie star” type dudes, Vince Vaughn and Owen Wilson, couldn’t push The Internship past the $20 million mark this weekend. (It did $18.1 million, to be exact, which is somewhere just shy of embarrassing. Although they should be docked some points here for the blatancy with which they attempted to make the Wedding Crashers link happen: As Forbes points out, the movie’s tagline was, um, “crash the system.”)

So, yep, it’s all Hawke. Now imagine some 13-year-old kid, having just seen The Purge, and now seeking out the rest of the work of his new favorite horror-movie star. He finds out his dude has a new movie playing this very weekend, and walks in sight unseen: “Yeaaah, Before Midnight … there’s gonna be some … murderers. And after midnight … more … murderers!” Things might get a bit confusing.

Filed Under: Before Midnight, Box office, Ethan Hawke, The Purge