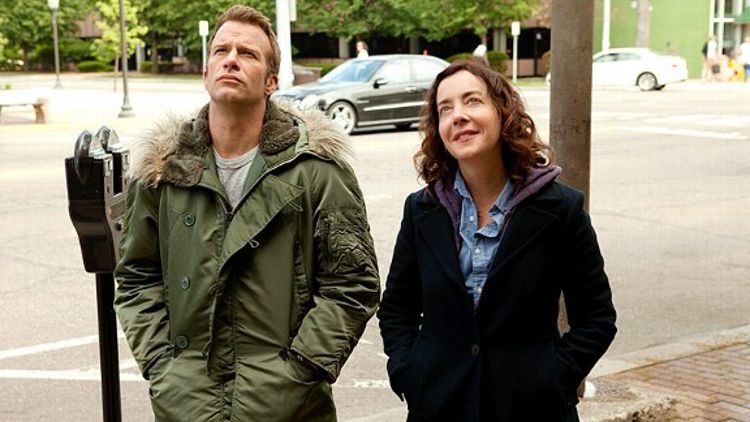 Over a five-year period beginning in 1998, HBO premiered Sex and the City (1998), The Sopranos (1999), Curb Your Enthusiasm (2000), Six Feet Under (2001), and The Wire (2002). That’s a DiMaggio-esque streak of hits, unparalleled in the unpredictable, ego- and money-fueled world of television. Which makes sense considering that at the time the network didn’t consider itself in the television business at all: It was in the HBO business. Unlike ossified, regular old TV, HBO was an exciting new world where breasts could be bared, F-bombs could be dropped, and Brian Benben was considered a leading man. The premium channel was blessed with an executive team committed to empowering cranky creators — can you imagine giving notes to David Chase, David Simon, or Larry David? — and an operating ethos that wasn’t tied to antiquated notions like “advertising” or “ratings.” Part of what HBO was selling was prestige: These were shows unavailable anywhere else, serialized conversation starters that dominated water coolers and Internet message boards. If you didn’t want to be left behind, you’d pay for the privilege of watching them. Sure, the shows were brilliant, but it isn’t hard to game the system when you’re playing by different rules.

So HBO’s mid-decade hiccup — that creative trench that brought us Unscripted (an improvised show about George Clooney’s girlfriend’s acting class) and Tell Me You Love Me (an overly ambitious gamble on America’s appetite for televised hate-fucking) — wasn’t just a result of visionary executive Chris Albrecht being forced to resign in disgrace. It was representative of a larger shift in the small-screen landscape as even the most obscure cable channels began to realize that investing in narrative series could instantly put them on the map, or at least liberate them from the lower 400s on Time Warner’s ever-expanding grid. The more attention-getting and risk-taking their offerings, the better. HBO was still HBO. But TV? That was quickly becoming HBO, too.

And lord knows it must have been galling for HBO to see the next generation of zeitgeist shows pop up on networks previously known for running Devil Dogs of the Air six times before breakfast. Even worse, Mad Men had been developed practically in-house by Matthew Weiner, then David Chase’s consigliere on the later seasons of The Sopranos. HBO passing on the script wasn’t just a colossal blunder, it single-handedly created a rival in AMC. Recently, HBO has recaptured the shine of its golden years but not the spark, leaving the gutsy gusto to its Oedipal offspring (which now includes Starz, with its new head Albrecht, who seems dead-set on going tit-for-tat — and then tit again — with his former employer). Instead, HBO’s new mandate on the drama side seems to waver between two options. There’s the Watch the Throne model of uniting big stars with bigger budgets. (See Martin Scorsese’s glossy trifle Boardwalk Empire or Michael Mann and Dustin Hoffman’s upcoming testosterone supplement, Luck.) And there’s the Nicki Minaj method of classing up genre via sex and ridiculous accents. (Game of Thrones’s humorless majesty was at least powered by a shrewdly professional horse heart, but all the equality allegories in the world can’t save True Blood from the fact that it’s a trashy soap about promiscuous blood-junkies being gnawed alive by “panther people.”) This strategy has stabilized not only HBO’s ratings but, more important, its reputation. Still, the network now emulates more than it innovates. Even David Simon’s furiously noble Tremé comes across more as a signifier of “quality” than, you know, actually good.

Where HBO still hasn’t figured things out is on the comedy side, as evidenced by yesterday’s midafternoon programming putsch, a holiday massacre that claimed the lives of 75 percent of the network’s humor offerings: Bored to Death, Hung, and How to Make It in America. All three shows had their adherents and, if you squint, all three had occasional charms. But HBO was correct in euthanizing them for one simple reason: None of them were funny, at least not in a traditional ha-ha sense. Bored to Death was “funny” funny, Hung was painful-funny, and How to Make It, despite being set in New York, was funny in the way people in Los Angeles think it’s funny if two people wear the same Steven Alan shirt to a breakfast meeting. But even with the decks so drastically cleared, it’s not evident what HBO’s remedy might be. Unlike with prestige hours, they can’t spend their way out of this mess: The strategy of attaching big names to comedies hasn’t worked out so well for them in the past — and even the network’s most lucrative relationship with a celebrity, Ricky Gervais, has been paying diminishing returns. If Extras flirted with flabby self-regard, Gervais’ upcoming Life’s Too Short, in which he shares an undersized portion of the spotlight with Warwick Davis, seems to embrace it fully. (Though it does provide an admittedly hilarious example of just how unfunny it can be when A-listers play for laughs.) And the era of the aspirational quasi-com ended for good when Entourage’s two (two!) Learjets lifted off the tarmac last summer. In the Occupy Wall Street era, Carrie Bradshaw’s cutesy capitalism feels as dated as last season’s Blahniks.

Just as HBO has been outflanked dramatically by scrappier upstarts AMC and FX, so, too, has it been outdone comedically. Having ceded the character-driven shows to cable, the broadcast networks have doubled down on sitcoms, producing dazzling half-hours fit for the whole Modern Family or just a small Community of joke nerds. In response, HBO’s more agile competitors have staked out affordable, niche-ier terrain: Adult Swim is amusing for the ADD-addled who find Happy Endings too sedate and IFC is quickly becoming comedy NPR, pairing highbrow reruns (including HBO’s own Mr. Show) with tasteful chucklers like Portlandia. The most successful comedy lineup on cable is, in fact, the antithesis of HBO’s brand: FX writes cheap checks to goofballs and reaps the rewards when The League and It’s Always Sunny find audiences that belie their budgets. The fact that Louis C.K., an HBO talent if there ever was one, failed with Lucky Louie only to find mainstream acclaim with the shambolic Louie is a burn as big as Mad Men.

2012 offers some promise, as HBO will debut two new comedies with established DNA and, crucially, an equally strong POV: Lena Dunham’s twee Girls is being shepherded by Judd Apatow, and Veep, from arch In the Loop architect Armando Iannucci, stars Julia Louis-Dreyfus and promises a similarly high-test strain of virtuoso profanity. But even if these shows are successful, creatively and otherwise, it’s likely not enough to restore HBO’s luster. Even the suits themselves seem to acknowledge the shifting sands of cable and their own precarious placement within them: Earlier this year the network tweaked its official ID. Gone are the grandiose comparisons and unsubtle snobbiness. In their place is the meek, declarative “It’s HBO.” Which is all well and good, but not much of a selling point when TV has proven itself to be so much better.

Filed Under: Comedy, Curb Your Enthusiasm, David Simon, HBO, How to Make It In America, Larry David, Sitcoms, The Sopranos