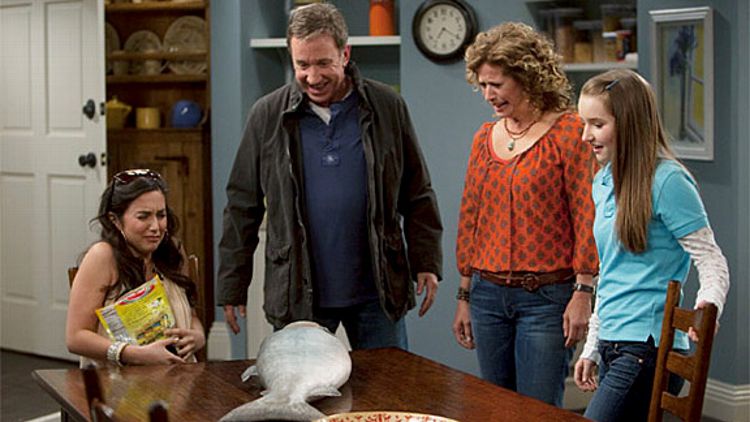 The pilot of Tim Allen’s comeback vehicle Last Man Standing was remarkably bad. Retrograde, mean-spirited and misogynistic, the show sent critics into paroxysms of boiling hathos. “The angriest, ugliest sitcom a network has thrown on the air in some time,” fumed NPR’s Linda Holmes. “Cringe-inducing badness,” marveled the usually even-keeled Alan Sepinwall. “Infuriating,” ranted, uh, me. But here’s thing about television: it’s unrelenting. A pilot can be tinkered with for years; a third episode gets about two weeks. At a certain point — usually a very early point — the prime directive of the writer’s room becomes less about statement or vision and more about feeding the beast or making the sausage (and then feeding it to the beast) or any number of crude, phallic metaphors that would no doubt thrill Mike Baxter, the testosterone-leaking lead of Last Man Standing. Network television shows, on a week-to-week basis, rarely have time to be remarkably much of anything other than “on the air.”

And so, last night, the fourth episode of Last Man Standing didn’t continue the show’s brave stand against health food or homosexuality, it didn’t brag about balls or censure soccer. The most noteworthy thing about it was how deeply unnoteworthy it was. It wasn’t infuriating; it was fine. Allen’s Mike Baxter was dialled down about 600 notches: now he wasn’t hellbent on taking his two-year-old grandson trick-or-treating because, if he didn’t, asexual reproduction would become the norm. He wanted to do it because he loved the kid and missed doing the same with his daughters. Nancy Travis — even in the pilot so clearly above the material she was practically in orbit — had more to do (although, yes, one of the things she did was dressing as a slutty pirate, proudly accentuating her “buried treasures”). And even the show’s go-to gimmick — gender jokes — was strangely and welcomely neutered: Mike laughs at a “lady president” Halloween costume before mumbling “it could happen” as if Gloria Steinem was holding a burning Virginia Slim to his head. The most objectionable thing in the entire half-hour was the sight of Hector Elizondo doing the Monster Mash.

Even more suprising? It was funny. Well, medium funny. OK, moderately amusing. At times. Like when Mike compliments his wife on the Margaret Thatcher get-up she wore to last year’s party (turns out she wasn’t wearing a costume) or when he roars out of the house, two-year-old in tow, declaring, “last time I checked my watch it still said America!” (“That doesn’t even make sense,” snarked youngest daughter Kaitlyn Dever, correctly, in response. She’s the sharpest tool in Baxter’s no-doubt overflowing shed.) It turns out Last Man Standing isn’t a radical broadcast show dead-set on stomping its (non pedicured) feet and making important, enraging points about the sorry state of masculinity in the modern world. It’s an old-fashioned family sitcom that wants to make the occasional joke about how the name Wong sounds like “wrong.” It’s possible to consider this marked improvement as course-correcting or proof of showrunner Jack Burditt being incepted by his former boss, Tina Fey. But it’s most likely a simple case of survival: it’s hard to make things ugly for twenty two weeks a year. Sustaining a character who is both compelling and legitimately polarizing — like Archie Bunker, say, or Poochie — requires both creativity and, that most precious of sitcom resources, time. The easier strategy is just to soften the edges and pretty things up a bit. It may sound feminine to a half-hearted caveman like Mike Baxter but the results are a lot more pleasant.

YouTube Hall of Fame: The Worst Music Videos of All Time