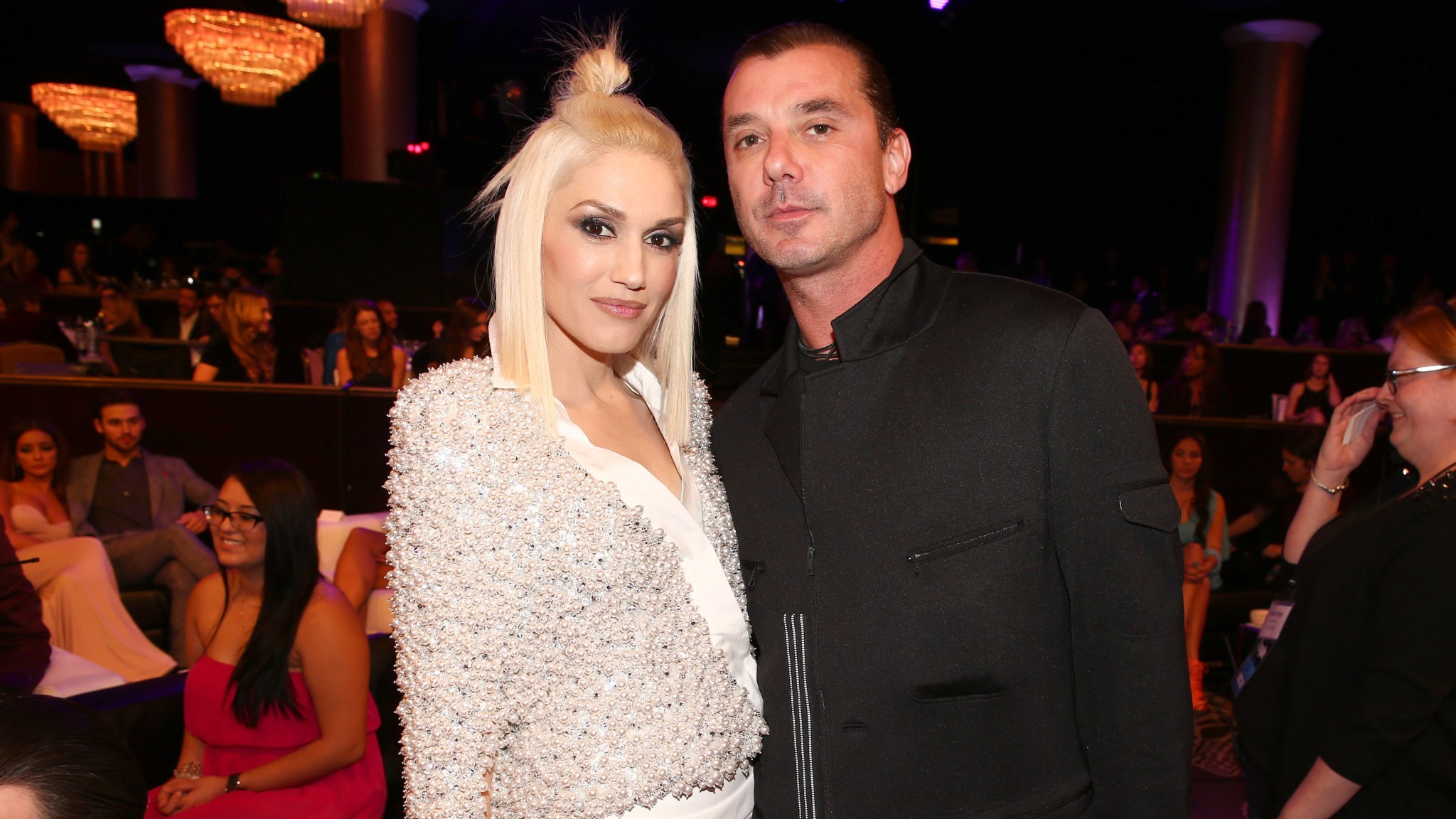 Who exactly are successful women supposed to date? The recent high-profile divorce announcements of Gwen Stefani and Gavin Rossdale along with Jennifer Garner and Ben Affleck have sent huge ripples through the gossipsphere. And whether or not you believe Nicki Minaj really did dump Meek Mill and break off their rumored engagement over his beef with Drake, it has definitely put her in a very weird position vis-a-vis her work and personal life. The Hollywood dating pool is apparently so small that even Taylor “Ain’t No Fun (If The Homies Can’t Have None)” Swift has decided it’s cool to let besties recycle dick.

The breakup of Gwen and Gavin, yet another signal that the ’90s are over, feels like it has been a long time coming. Although they presented a public front of being the perfect “cool” rock family — letting sons Kingston and Zuma dye their hair and wear nail polish — there were always tabloid rumors of Rossdale cheating. Long before they even got married, there were whispers that all was not a fairy tale in the Stefani-Rossdale union, most of which came from Gwen’s lyrics. Incapable of not wearing her heart on her sleeve, Gwen always conveyed through her songs that there was a power imbalance between her and the object of her affections, and she was somehow on the losing end. She had already portrayed herself as a victim of love in “Don’t Speak” after band member boyfriend Tony Kanal broke up with her.

Gwen seems to fall so deeply and painfully in love, whoever the person she loves may be. It’s part of the poignancy of her public image — that this beautiful girl with the big, romantic dreams always sees them deflated. And it’s the flip side of her other persona — that of the fearless female rock star. Gwen seemed so committed to staying with her man through it all — she weathered the revelation that Gavin was the father of model Daisy Lowe — that it’s actually surprising she would leave him now, after three kids. Gwen cited that old chestnut “irreconcilable differences” as the reason for the split.

While not the same kind of star she was in the ’90s, Gwen has taken on the now-respectable position of a judge on The Voice. Gwen, ever the romantic, failed to take Drake’s advice about hitting her man with the prenup. Gwen is worth $80 million, and Gavin is apparently worth about $35 million of Bush money. Gwen is 45, Rossdale is 49, and they were married for 13 years after dating for six — an infinitely long time for a celebrity relationship to last. Like fellow blonde rock stars Stevie Nicks and Taylor Swift, Gwen always wrote what sounded like thinly veiled songs about her relationships, and it connected her to fans — fellow girls who seemed to have everything in the world going for them but were still capable of being pushed around by the desires of even more willful men.

Gwen made no apologies for her dreams of getting married and having a family, but she also never put the brakes on her own career, either. She was always unapologetically old-fashioned yet progressive. Starting with “Just a Girl,” Gwen has walked this line — the desire to stay naive and uncynical coupled with the creeping knowledge that the world is not all sweetness and light, even if you are. When Gwen and Gavin met, her band was opening for his, but she eclipsed him in fame and this was the sin for which the tabloids would never forgive her. Gwen and Gavin’s relationship was dogged not just by cheating rumors but by a pervasive judgmental misogyny that tabloids feed on, that a woman’s career and earning power never outshine her man’s. It’s always pulled out as the justification for cheating rumors on the male’s part — how else is he supposed to deal with emasculation if not by acting out?

There is rarely a model presented in which the woman makes more than the man and they’re both fine with it, which helps the converse narrative — that men always make more than their wives — become normalized. In the modern world, two-income households are less a symbol of equality than just a necessity for most couples to survive. Gwen’s housewife dream was modernized — she didn’t have to give up her career for her children or husband — but the narrative the tabloids have pushed since the divorce is that Gwen and Gavin were doomed from the moment she became a bigger star than him. It’s the old story of A Star Is Born, which depicts the rise of a young starlet above the ranks of her aging, alcoholic partner. It’s such an eternal chestnut that it’s been remade twice, first with Judy Garland and James Mason and then with Barbra Streisand and Kris Kristofferson. Clint Eastwood had threatened to remake it a second time, and now Bradley Cooper is rumored to be preparing to make it his directorial debut with Beyoncé as his costar. Putting Beyoncé in a remake of A Star Is Born seems meta given that her marriage to Jay Z has received a lot of extremely A Star Is Born–like scrutiny. And just as men are expected to be emasculated by successful women, women are expected to seek out a man whom they can stand behind dutifully while he takes the spotlight.

For the length of their marriage, Jennifer Garner was the epitome of a dutiful wife. She lent husband Ben Affleck a sheen of respectability and virtue. Affleck’s engagement to Jennifer Lopez coincided with the critical low point of his career. His breakup with Lopez became a rebranding decision. After getting with Garner, he said of the Bennifer years “I thought I wanted certain things, but I didn’t. I got lost. I felt suffocated, miserable and gross. I should never have gone down that route or got sucked in to all the publicity.” The famously publicity-courting Bennifer also cited the media’s racism about their pairing as an external pressure that hurt the relationship. The tabloids portrayed Lopez as a hyper-sexualized Latina with whom Affleck could not possibly be in an intellectually based relationship.

And so when he married Jennifer Garner, she was portrayed as a more sensible choice — a good girl and a nice pretty white lady with wholesome sex appeal that she possessed but didn’t lead with, unlike the brazenly sensual image of Lopez. And like a politician’s wife, Garner set up Affleck for his Argo campaign. Now he was no longer Ben Affleck, strip club party boy and all-around hot dick, he was Ben Affleck, family man and serious director. Affleck started out playing sleazy bullies, in Mallrats and Dazed and Confused, before turning to virtuous leading-man roles. His sleaziness is a major component of his charm — it’s why Affleck was the perfect choice to play charming dirtbag husband Nick Dunne in David Fincher’s Gone Girl.

Affleck called his marriage to Garner “work” in his Oscar acceptance speech for Argo, which some people thought was romantic because of its honesty. But some felt as though he had accidentally been too honest about his marriage, or committed the sin of failing to present a married couple’s unified front of infallibility. What goes on between two people in a relationship behind closed doors can never truly be known to anyone but those parties, and gossip about celebrity relationships is a macrocosm of local gossip. People speculate about their friends’ relationships all the time — about whether people are really happy or just faking it, whether power imbalances define dynamics, about who is cheating on whom and with whom.

Speculating about celebrity relationships is a way of watching these tropes play out on a big screen. And just like Lindsay Lohan seemingly learned none of the lessons of Mean Girls, it doesn’t seem like Ben Affleck really internalized the lessons of Gone Girl. Because his mistress, the nanny, just blew his spot up with pictures she had taken by calling the paparazzi in advance. Affleck had denied the rumors that he cheated on Garner with their 28-year-old nanny, Christine Ouzounian, but the nanny was sly enough to get receipts. She’s now staying at the Hotel Bel-Air, and even the famous-friendly People mag insinuated Affleck might be footing the bill. People has so far been strictly Team Garner, and there’s no reason to believe it won’t continue to push the Saintly Jilted Wife story line, intending to appeal to its largely older female readership.

Affleck, about to embark on a huge worldwide press tour for Batman v Superman: Dawn of Justice, is hilariously screwed. But that’s also part of Ben Affleck’s narrative — he screws up, he apologizes, he is forgiven. He makes a bad movie, then he makes a good movie. He says some intelligent, self-aware stuff about what a fuckup he is, and then he smiles his stupid Nick Dunne “what can you do?” smile and all is forgiven, at least for another stretch. The thing about the Ben Affleck and Jen Garner story is that it demonstrates that even the path offered by magazines as the “right” one — be less famous/bankable than your male partner, take time off from your job to raise the family while he continues to work — doesn’t always work.

In this way, tabloids help keep women in a permanent state of fear — that women, even powerful women, need to make themselves subservient to their male partners in some way and that even if you do that, it’s no guarantee the male won’t roam and seek out somebody younger and hotter. It’s misogyny, but it’s also misandry — making all men out to be insecure assholes who can’t help but be emasculated by women’s success. Until their marriage this week, the tabloids insisted that Jennifer Aniston’s greater earning power and clout meant she and Justin Theroux would never be able to make it as a couple. This came after years of torturing her for being single and for Brad Pitt leaving her. I feel pretty confident that the “Poor Jen” mantle will now be passed on to Jen Garner, at least until she rebounds with some other powerful man.

Enter Nicki Minaj, who finds herself in a totally impossible situation. Having broken up with Safaree “SB” Samuels, her longtime boyfriend and first real love, Nicki had seemingly found new happiness with Meek Mill. She had always kept her relationship with SB somewhat private, possibly to spare him the media emasculation that came with being her non-famous boyfriend. With Meek Mill, Nicki made the relationship so public that they collaborated on several songs and he came on her tour. That, of course, would be the sticking point for Drake on “Back to Back” — a relentless, humiliating emasculation of Meek Mill that also insults Drake’s supposed BFF Nicki. As much as everyone would like work and home to remain separate, it’s inevitable that moods carry over from one into the other. Drake is not exactly Nicki’s knight in shining armor coming to her defense with the whole prenup joke, either. The joke, as always, suggests that Meek is not quite a real man because Nicki is the leader in their relationship, financially and talentwise. But how can every talented, high-earning woman possibly only date men who are even more talented and high-earning than they are? It’s bound to break the other way sometimes, and it’s something society has to learn to accept.