Grantland Style Report: Halloween Costumes of the Rich and Famous 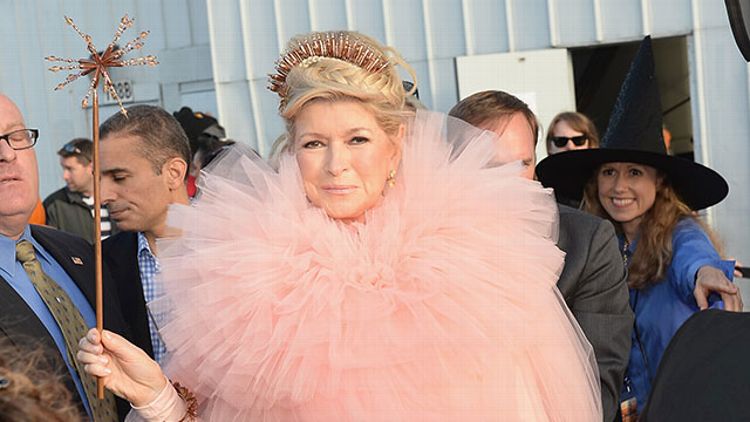 Cohen dressed as, I think, a business-casual ape having sex with a peasant woman (or he could be an ape riding an old lady who is pretending to be a horse), while Fisher was a ballerina tiger on their way to a rave at the Casamigos Halloween party in Los Angeles. Cohen has built his career on highly costumed characters (Ali G, Borat, Brüno), but unlike most actors, the glue that adheres his masks is ultra-sticky: Borat responded to Kazhakstan’s threat of legal action against Cohen with support of its decision to “sue this Jew.” Last year, the couple wore a pair of costumes that were not only strange (a cow-monkey, using the same monkey mask from this year, and a sock monkey packing a giant penis), but confusing (did they switch costumes at some point, or is that magical vanishing blue nail polish?). 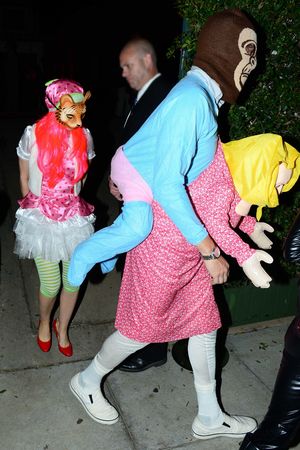 Maybe the winks at sexuality in Halloween costuming are meant to be subversive — as far as sexy monkeys go, I prefer Cohen’s to this lady’s — or maybe it’s just further proof of what Cohen already knows: There’s no point in dressing up for Halloween unless you expect, and want, people to look at you. In that case, toning anything down goes against the goal. Cohen split from a planned Freddie Mercury biopic in July, reportedly because he envisioned a “gritty R-rated tell-all” instead of a more family-friendly movie, per the wishes of the remaining members of Queen, so it’s clear he’s not the type to compromise (and who really wants to see a PG Freddie Mercury movie?). So why not hump, or ride, a handkerchiefed doll? Why not hold the hand of a giant-dicked sock monkey, or be the giant-dicked sock monkey? Why not, next year, do both while also wearing neon green suspenders? Just thinking ahead.

Oh, Paris. Paris loves the 'ween. This year, she spent $5,000 on costumes from Trashy Lingerie, including this homage to Miley’s VMA getup for the Playboy Mansion party on Saturday. This is a perfect example of a costume that just wants so badly to be ugly and funny, but is thwarted by the modifications of its wearer, who can’t bear the thought of looking ugly and funny. Behold the extra boob-lift afforded by the supportive silver bra, the shimmery tights, the perpetual skinny-arm pose. Those hair buns want to be too tight and unflattering, but instead they have been teased into something cute against their will. Paris also bought a custom-made outfit in honor of Katy Perry in the video for “Roar,” as well as “sexy fairy, princess and warrior costumes.” Now that I’m thinking about it, Paris Hilton could really change everyone’s perception of her by once, just once, dressing like, say, Wilford Brimley or the Quaker Oats man (who is, apparently, not actually William Penn). I’ll take all those imaginary points and award them to Kelly Osbourne, whose Dame Edna was really on point (and kind of sexy?).

(Joan Rivers’s take on Cyrus involved a fat suit and a prosthetic tongue and embraced ugliness and funniness, with a dash of mean. It also doubled as a study in body dysmorphia.)

Chung dressed as a hamburger bandit, coordinating with friends Harley Viera-Newton (a hot dog) and Fiona Byrne (a McDonald’s worker) in New York. Chung became disillusioned with modeling after doing commercial work for unglamorous products like tampons and Fanta, and went on to become a TV host, journalist, and author — fields in which she actually got to, you know, use her brain and mouth to communicate. Being a burger takes confidence: You are a tree-shaded, modest street on a map that has been paved into a grid of Leg Avenues. Of course Chung is a beautiful hamburger, but her body is classily sandwiched between billowy buns that protect her against leers. “Fairy Grandmartha” is a pink tulle explosion. “Fairy Grandmartha” is what happens when an ethereal, giant stick of shimmery grandma-pink lipstick melts down from the heavens and falls in a warm autumn shower all over a woman who makes you feel like shit about the scones you bake. Everything about this costume is quintessential Stewart, from the side-eye she’s giving her hairstylist in a behind-the-scenes photo to the matching flower details in her coif and on her ring. Stewart’s Halloween magazine cover invites you to “Cast a Magical Spell!” even though there is no tulle left on planet Earth ever since Martha’s collar ate it all. There is no way to replicate this drama, so you’re left feeling inadequate and awed at the same time. I love divas on Halloween. I don’t really know who Derek Hough is because I don’t watch Dancing With the Stars, and I don’t know what he was for Halloween either. A punk? Most definitely. But which punk? Is he the love child of Deryck Whibley and Adam Lambert, maybe? What I do know is that Hough played it vague and crazy-safe for the holiday, while his sister Julianne played it crazy-eyed in blackface. I have no idea whether Derek and Julianne are competitive with each other (they both became professional dancers as children), but because Googling “Derek Hough Halloween” returns results exclusively relating to his comments about his sister’s costume (“Obviously it wasn’t her brightest moment in her life”), I’m going to award him a point and move him ahead a square in my Hough Family board game. Collect $200 and stick it in your Mohawk, Derek.

So, this is the fourth amigo. The Voodoo Amigo. My favorite part of his cape is the angular ghost shooting ninja stars. Things haven’t always gone well for Arquette, and he makes mistakes like getting too many tattoos and besmirching professional wrestling just by showing up. But, as the song goes, you cannot kill David Arquette. He wears his heart on his sleeve, right next to the skull with blood in its eyes.

Larry David was on the Daily Show a few years ago and confessed that all of his clothes had been stolen from on-set wardrobes and assimilated into his own, so I can’t imagine that he really enjoys garment shopping, even on Halloween. That’s why I enjoy his Siamese twin costume: It’s the minimum amount of effort for the maximum amount of impact. And while it’s predictable in the sense that he could keep wearing his iconic footwear, it’s still surprising: I was under the impression he found human contact repulsive. Way to add another layer to yourself, David, with your makeshift eternity scarf and unnamed male friend appendage.

Do You Like Prince Movies? Podcast: The Counselor, Lou Reed, and Katy Perry