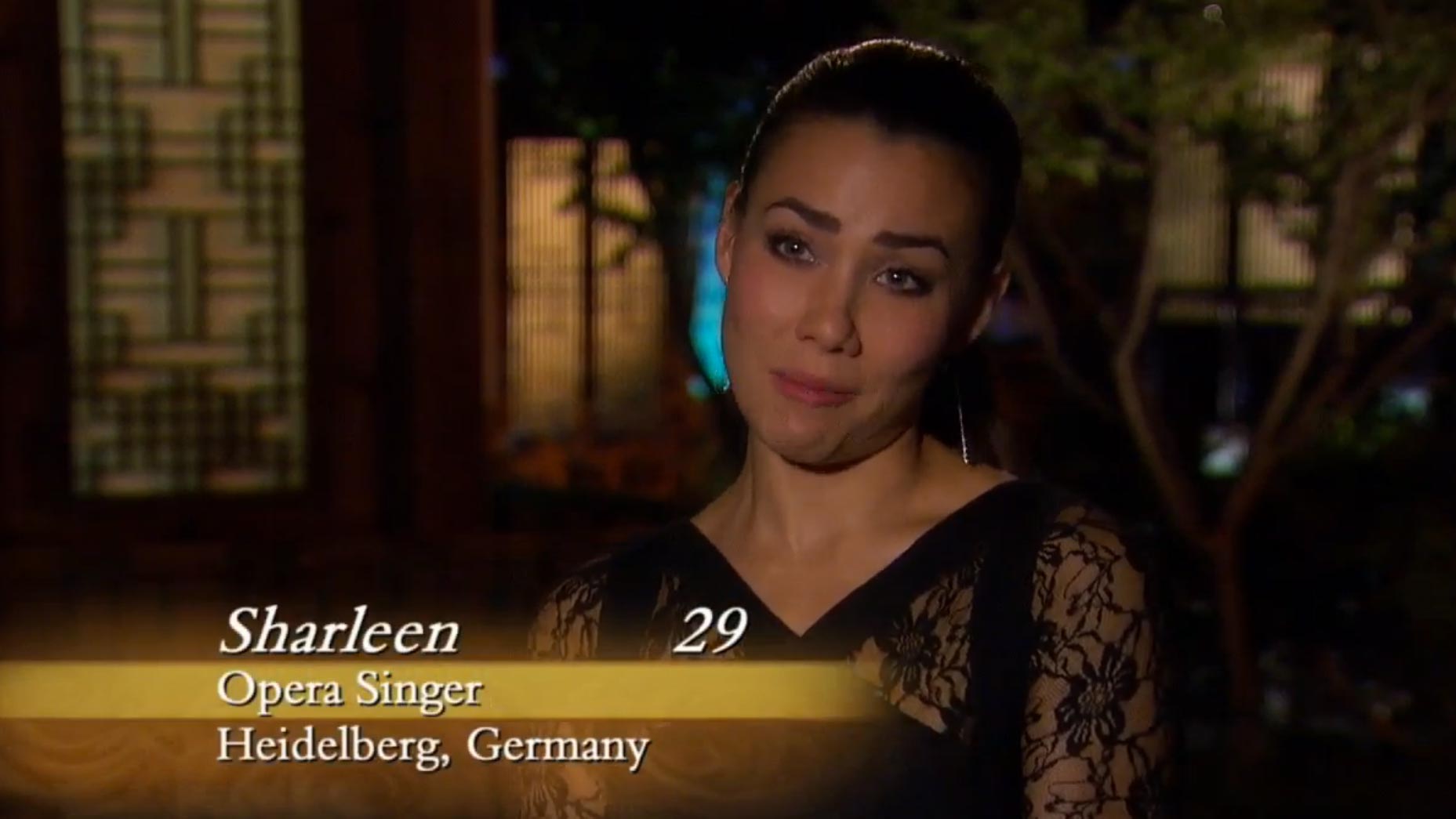 This week’s GRTFL examines the first woman in Bachelor history with actual self-esteem; a dude with the words “Tramp Stamp” tattooed on his lower back; and Stassi, the Charles Manson of SUR. Let’s get right to it.

What is Sharleen doing on this show? She’s so … normal. I’m convinced she’s a plant, or lost a bet, or is staging a science experiment or something. She acts like a self-aware, reasonable adult — which makes her the first of her kind on this television program.

Most women go on The Bachelor and immediately buy in. They acquiesce to the idea that if they fail to win the competition, they’ll face eternal misery and spinsterhood. They fall in love with a man they watched try to marry someone else on TV. Take, for example, poor Lauren the Musician, who got voted off this episode and cried, “What am I going to do now?” Hey, Lauren the Musician, I’ll tell you what you’re going to do now: Live life like a normal person. A normal person like Sharleen.

Sharleen told one of the other girls that she finds her conversations with Juany Pabs dull. Do you know why she finds them dull? Because he is dull. Sharleen has also said she’s still trying to figure out if she has chemistry with Juany Pabs because — gasp! — she didn’t automatically fall in love with the guy simply because Chris Harrison told her to. This show has never seen anyone like Sharleen. My wife put it best while we were watching this week’s episode: “She is the best Bachelor contestant I’ve ever seen. I’ve never seen a woman on this show who has self-esteem. They never have self-esteem.”

Of course, Sharleen’s fellow contestants are deeply skeptical of her televised spouse hunting. They seem to think she’s disrespecting Juan Pablo by not falling in love with him merely because he’s holding a rose. It’s totally working on Juan Pablo, too. Forget cooking, or dressing up, or any other shit you might have heard: The way to get a guy to like you is to diss him. Juan Pablo can feel Sharleen’s hesitation, so he keeps giving her rose after rose.

Is Juan Pablo the most boring Bachelor of all time? I mean, I can stay up all night watching 20-year-old reruns of Unsolved Mysteries, but I couldn’t score this week’s episode without falling asleep. That said, there were a few good moments this week, namely in the form of quotes from the lovely-ish ladies themselves.

Here are my favorite quotes from this week’s episode that perfectly sum up Juan Pablo’s quest for love:

Clare: “Korea? I don’t even have a kimono.” It’s OK, Clare. It’s not your fault that the contestant application didn’t include a geography quiz.

Clare: “Eating octopus is the epitome of my fears!” Most people would name something like death, failure, or giant flesh-eating tarantulas. Not Clare. Her worst fear is calamari.

Kelly: After Clare chokes down that imperceptible piece of octopus, Kelly the Dog Lover Who Apparently Doesn’t Have a Real Job quips, “Please, I know you’ve swallowed bigger things than that,” proving once and for all that girls are catty in any country.

Lauren: [Slurring] “Dance with me.” We only know three things about Juan Pablo: He has a daughter, he’s a former professional soccer player, and he really likes to dance. Thus, the girls have resorted to asking Juan Pablo to dance at every available opportunity, since there’s only so much to talk about with El Bachelor. Poor Lauren Who I’m Not Convinced Was on the First Three Episodes tried this tactic, but she also asked for a kiss, then got shot down. She left embarrassed, roseless, and regretting the money she spent on pre-Bachelor salsa lessons.

Sharleen: “You’re not bland.” Jacoby already covered Sharleen in detail, but let’s just take a moment to appreciate that the nicest thing she could say to Juan Pablo is that he’s “not bland.” If that doesn’t scream everlasting love, I don’t know what does.

I guess we now know a fourth thing about Juan Pablo: He doesn’t know what “bland” means.

Next week’s episode is sure to bring more culturally insensitive statements, forced group dances, and further reason to question why no one has bought Juan Pabs a Spanish-English dictionary yet.

Stassi came out of nowhere, but she’s dominating the game. Stassi is Paul George. If you aren’t watching Vanderpump Rules, you’re missing one of the most dominant reality TV performances you’ll ever see. This chick is throwing a perfect game.

So far this season, Stassi has emotionally eviscerated every one of her friends; broken up two relationships; and become the Charles Manson of SUR. People who work at the same restaurant as Stassi end up doing her bidding. Scratch that: People who make eye contact with Stassi end up doing her bidding. I’ve never eaten at SUR, not because I don’t want to see my favorite television zoo animals in their natural habitat, but because I fear Stassi. She’s human heroin. Once she enters your life, you’re powerless against her. And so, this week’s GRTFL Top Five is “The Top Five Best Stassi Quotes From This Season.” Oh wait, that’s totally a lie; it’s actually “The Top Five Stassi Quotes From This Package They Aired on Watch What Happens Live,” but that doesn’t sound as cool, huh?

Stassi is everything. Here’s the rub, though: My pod partner has been Internet stalking Stassi and learned that she moved to New York. What does that mean for Season 2 of Vanderpump Rules? Bravo, do whatever you have to do to get this chick back to SUR and in front of cameras and microphones. Stassi should always be in front of cameras and microphones.

Party Down South is the drunkest reality show I’ve ever seen. I’ve only watched the first episode, which only covered the first day in the house, but in that time, the seven people in the house must have polished off four bottles of Jack Daniel’s and at least 2,000 Bud Lights. When they woke up the next morning, they had to introduce themselves again. Let me say that one more time: THEY HAD TO INTRODUCE THEMSELVES AGAIN. It was amazing.

Not nearly as amazing as Murray’s tattoos, though. I mean, he has the word “TATTOO” tattooed across his chest in Old English letters: 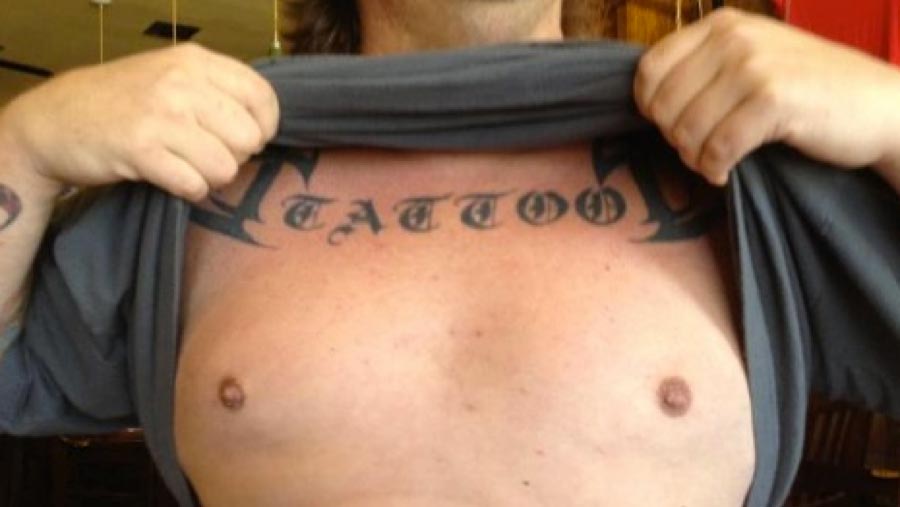 Already in love with him? Allow me to direct your attention to the skateboarding hot dog tattooed on his arm: 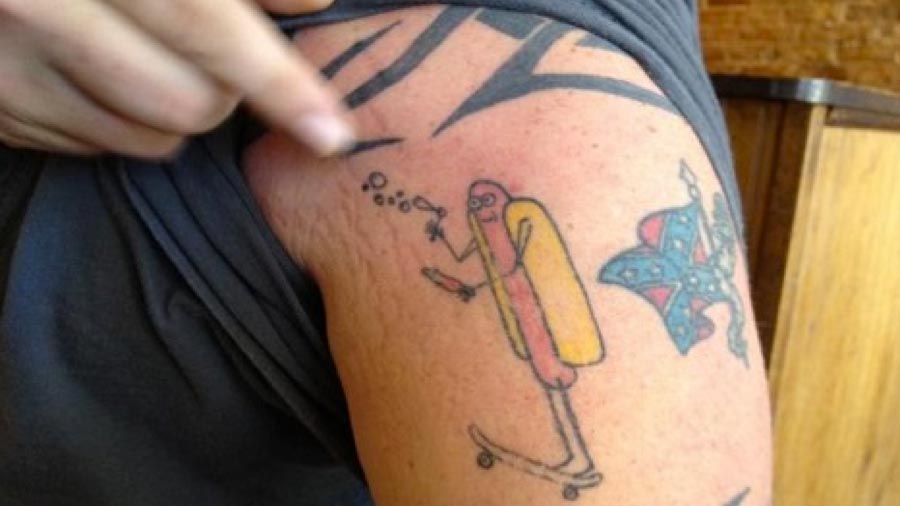 Sure, he loses a couple of points for the nearby worm holding the Confederate flag, but he more than makes up for that with his pièce de résistance: 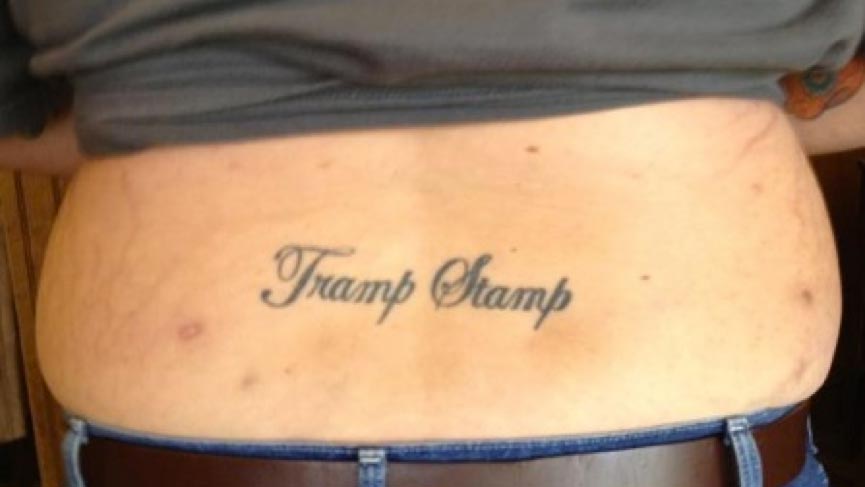 Yes. That says “Tramp Stamp.” The weird bacne makes it that much better.

I can’t think of a more fitting way to end this column, so check back next week for a full breakdown of Real World: Ex-Plosion. This week’s episode was a doozy. Enjoy the weekend.