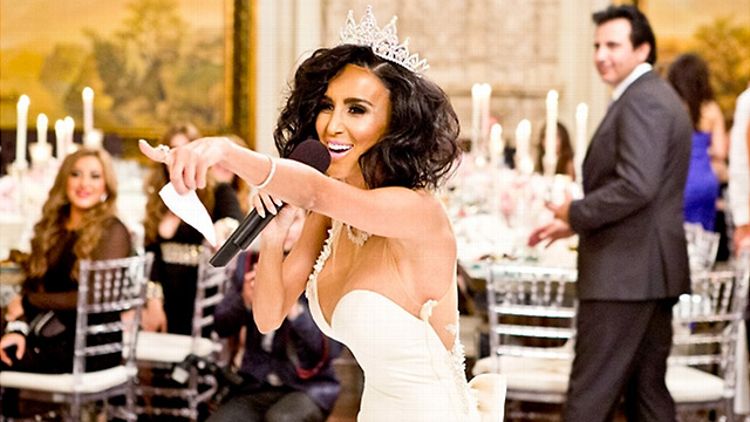 Finally, some reality TV worth discussing! Bravo gifted us with four premieres this week: Shahs of Sunset, Real Housewives of Beverly Hills, Vanderpump Rules, and Real Housewives of Atlanta, all of which mercifully added a little flair to the GRTFL’s DVR. Now, don’t misunderstand: I’m not going to, you know, actually write about these shows every week. That would be crazy; that would involve taking notes, and keeping score, and thinking, and stuff. Who has time for that when there’s this much Bravo to watch? However, I do recognize that not everyone celebrates the release of four new seasons of Dumpster-dive TV, so I’ve decided to provide a quick summary of each programme (I love spelling it that way) so you can decide whether you’d like to dedicate the 44 minutes, countless brain cells, and lost self-respect that is the price of admission for entering the weird world of Bravo reality TV.

Before I get into the specifics, it’s important to note that all four shows follow Andy Cohen & Co.’s simple television formula:

It’d be easy to sit here and make fun of the formula, but I watch five hours of this shit every week … so who am I to judge? The thing is, the stars of these shows aren’t good people. As much fun as it is to giggle at their quips, ogle their inflated upper lips, and bask in the schadenfreude of their delusional dreams, watching that all brings on a depressing feeling. The feeling comes from realizing that many viewers actually look up to these people. These shows are perpetuating an imbalanced value system that places the material over the moral. You can’t let that get into your head, though. In fact, having nothing in your head is the preferred state for digesting these programmes, because that’s the best way to get in the same state of mind as the people on the shows.

Let’s break the shows down one by one, listed in order of enjoyment.

This show, like Small Town Security and Eat, Drink, Love before it, is my current “Why do I love this show so much?” show. It’s about a bunch of deplorable, mostly unemployed people rolling their way around Beverly Hills in luxury vehicles. I couldn’t figure out why I loved it so much until my pod partner pointed it out: These people actually know each other. In real life. The rest of the Bravo fare is about women who were put together for the sole purpose of arguing on national television for advertising dollars, but Shahs of Sunset gives us a peek into a community. Now, before you freak out, I am VERY WELL AWARE that this show reflects the true Persian community in Los Angeles they same way Road Runner cartoons reflect the true coyote community of the Southwest. Still, this group of friends is a micro-community — a community in which people throw 30th birthday parties for themselves, invite 120 people they don’t know, change dresses four times, and give out awards like it’s prom night:

The prom king you see above is Reza, and he’s the other reason I love this show. If he opened a start-up company called Rent-A-Reza that enabled people to pay an hourly rate to spend time with him, I’d max out every credit card I have. I’d end up like Bubbles on The Wire, stripping copper just to earn enough to get my fix. The best part about Reza’s appeal is that he isn’t all that appealing. He’s superficial, materialistic, shallow, success obsessed, and egomaniacal, but what can I say? The guy has a way with words.

If Reza doesn’t do it for you, there’s always Asa, who last season started a company that sold diamond-infused water; Golnesa, who last season wielded a kitchen knife as a weapon; or MJ, whose offseason training regimen consisted of drinking all the alcohol, putting on a bikini, and roller blading in public:

I don’t have to explain any more, right? Just look at that photo. It’s all right there.

I’m just as tired of the Real Housewives of Whereeverthehellwhocaresanymore as you are. I get it. You can only listen to the same song so many times before you want to jam pencils in your ears to make it stop. I was almost there with the whole Real Housewives of Whereeverthehellwhocaresanymore franchise until I saw this first episode of Atlanta on Monday.

The Atlanta housewives are just so much fun. They’re half in on the joke and half crazy enough to make you feel like they aren’t. Last year’s ENTIRE SEASON was centered on two competing workout videos, one titled Donkey Booty and one titled Stallion Booty. And just when I was ready for another season of mindless arguments, silly outfits, and sassy catchphrases … this happened:

That’s Porsha Stewart. She’s crying because she’s going through a divorce with Kordell Stewart. Yes, THAT Kordell Stewart. Here’s the thing, though: In the very first episode of the season she … well … how do I say this … she called him gay. Yep. For real. She didn’t full-on say it, but she did say this: “I asked him about the rumors of him being gay … he explained it away. I didn’t question whether he was gay or not because someone else said it. Any reason I questioned it were things I had experienced or seen.” I’m just going to leave that one alone and focus on the other aspects of Atlanta that I find appealing.

Cynthia married a dude named Peter who spends the family’s money without letting her know, Phaedra married a dude who may or may not be at the hotel motel Holiday Inn with other women, and Nene married a dude she’d ALREADY MARRIED. Oh yeah, and there’s this chick named Kenya Moore (of Stallion Booty fame) who’s an alien sent to this planet to perfect the art of nonsensical rebuttals. It’s worth a watch.

OK, I’ll admit it: This show is stupid. It’s a show about pretty people who make up names for themselves (Jax?), move to L.A. to become movie stars, and end up being bartenders and waitresses. Thing is, they become bartenders and waitresses at SUR, a restaurant that’s kinda-sorta owned and operated by Lisa Vanderpump of the Real Housewives of Beverly Hills. So Cohen & Co., looking to wring every dollar out of the cultural skidmark that is upper-crust Beverly Hills, made a show about the staff of SUR. Hence the name, Vanderpump Rules.

Here’s what happens on this show: Bros cheat on their girlfriends, and girls argue about petty work shit. It doesn’t sound like much, but that alone can actually fuel a full season of Bravo trash.

The main attraction is the ballad of Stassi and Jax. You may know Jax, because according to his bio, he has appeared in “many national magazines” and the “Assassin’s Creed video game box.” In case you’ve forgotten, this is what the Assassin’s Creed dude looks like:

YOU NEVER SEE HIS FACE! When he’s not tied up with his bottom-right-quadrant-of-the-face modeling, Jax is slangin’ mojitos at SUR. This season, he’s spending his time trying to woo back Stassi, whom you may know from finishing “seventh on The Amazing Race in 2005” and being “voted ‘Most Talented’ by her senior class.” The other gentleman on the show is Tom, whom you may know from “appearing in 2 Bon Jovi music videos.” Tom cheated on his girlfriend Kristen with a table-service girl in Vegas. You may know Kristen from being “nominated for Best Actress in a Drama at the ITV Festival.” Tom and Kristen stayed together even though he slept with said table-service girl, but every time they speak, Kristen throws it in Tom’s face. I feel like if you choose to stay with someone who cheated on you, there should be a six-month statute of limitations after which you can’t guilt him or her about it anymore. Can we get this passed as a law? Also, WHO KNEW IT WASN’T “STATUE OF LIMITATIONS?” Don’t lie, you thought it was “statue” too.

Anyway, this show is fine. The people are pretty enough and the arguments are passionate enough to make you forget for a second that it’s basically a terrible CW drama being paraded as reality TV.

This show sucks. What sucks worse than this show is the fact I will watch every episode of it.

Oh yeah, I almost forgot that I’m scoring a Reality TV Fantasy League here. Survivor has been solid all season. It’s certainly a welcome respite from the four hours of school-cafeteria slop Bravo dropped on our plate this week, but it’s mediocre as far as Survivor seasons go. This week the tribes finally merged, and we learned what exactly it means to have your closest ally in life on your tribe: It means one of you is getting voted off. Since the only person who earned points this week was Ciera for crying (5 points), I’ve decided to make the whole Survivor breakdown this week’s GRTFL Top Five. This week’s GRTFL Top Five is the Top Five Best Things That Happened on Survivor, listed from “Well, I guess that was OK” to “I watched it four times just to make sure it was real”:

4. Someone finally went looking for the idol. Shout-out to Tyson for finally finding the damn idol. I don’t care how many times Monica burns the clues; if I’m on that show, I’m finding that idol. The only clue we saw said something about a tree that looks like a serpent, and somehow Tyson was the only one smart enough to find the tree that LOOKS EXACTLY LIKE A SERPENT. And sure enough, there was the idol.

3. Ciera didn’t want her mom to join her after the merge. Ciera straight-up didn’t want her mom, Laura M., to win the Redemption Challenge. At first it seemed like an insane and heartless stance, but it started to make sense once Aras got voted off for being in a threatening alliance with a loved one. I honestly feel that the only way to keep a loved one around is to vote against him or her once or twice and fake a couple arguments around the fire. That’s what I would do.

2. The merge feast sucked. You ever go to an Italian restaurant and see one of those antipasto plates? They sound like they’re going to be great, with all of that soppressata and salami and provolone and other meats and cheeses you can’t pronounce. Problem is, when the thing comes, it’s that weird salami that tastes like licorice, and the other meats are all fatty and gross, and the cheese is so hard you need a chisel just to get some on your plate. Don’t act like you like that stuff, because you don’t. The only reason you eat it is because it’s the first thing that comes to the table, and you’re hungry. THAT WAS THE MERGE FEAST. They all ate the food and acted all excited about it, but I could tell deep down they were all disappointed. None of them will ever order the antipasto again. Who wants olives in their meat, anyway?

1. Aras got voted out. Aras and his brother Vytas were both highly regarded on their separate tribes, and once they merged, they quickly had a bro-down:

After which, Vytas declared, “We got this beach on lock. And I would be surprised if anyone had the guts to do anything about it.” After which, Aras was voted off. The best part about this whole scene was how much Jeffy P loved the whole thing. Jeffy P loves a good blindside.

Enjoy your weekend. And while you’re raking leaves or driving around or cleaning or whatever, listen to Juliet Litman and me on The Right Reasons podcast. I apologize in advance for using some of the same bits. I’m simply not smart enough to avoid it. See you next week.