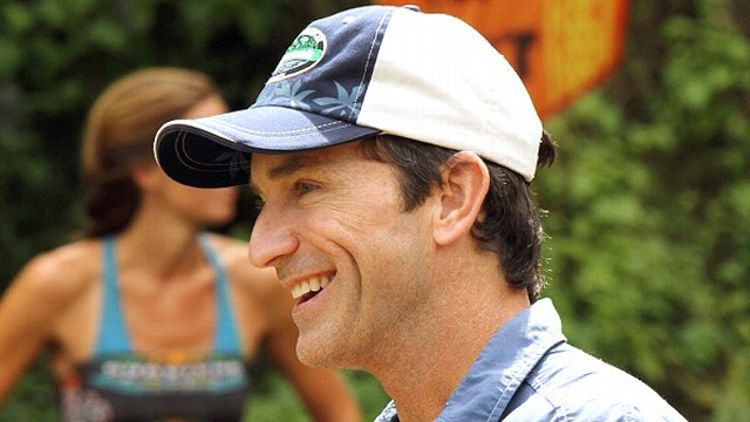 Screw this, we’re adding Survivor to the GRTFL. With the spring reality TV season winding down and the summer trash yet to be lugged out to the televised curb, something had to be done. Plus, this season of Survivor is starting to get good.

If you haven’t been watching Survivor: One World, fear not, you can read Tess Lynch’s so-good-they-kinda-piss-me-off recaps or I can get you all caught up on the first 11 episodes in a couple of sentences. At first there were two tribes, one all men and the other one all women, and they shared the same camp. Nothing happened for two months until all that was left were six hot chicks, a dude named Tarzan, and a dude named Troyzan. Read that last sentence again. Yes, this season of Survivor has basically dwindled down to the premise for a porn flick, and once that happens, well, welcome to the GRTFL …

Survivor scoring in the GRTFL is tricky because no one gets drunk, no one gets coitusy, and everyone gets blurcled. As a refresher, here are the Survivor-specific rules we created last go-around:

This time ’round we are removing “Adding additional flair to the vote card: -10 points,” adding “Winning the show: +50 points,” and adding “Getting so thin that your image no longer registers on camera: +50 points.” You will understand the last addition when you see this season’s Kim.

This draft got weird real fast. Normally when we have a GRTFL expansion draft it’s a three-day process that consists of a couple dozen personal insults, three complaints from Bill about the draft order, confusion over the scoring, and at least one major oversight on my part that derails the whole thing. This time we held the draft at Radio City Music Hall in front of a huge crowd, with Roger Goodell hosting and Todd McShay and Mel Kiper providing the analysis. Anyway, here’s how it all went down:

(Roger Goodell takes the stage, which has been decorated in a jungle theme, but poorly.)

Goodell: “Welcome to the 2012 Grantland Reality Fantasy League Survivor Expansion Draft! This should be an exciting evening. With six teams in the GRTFL and only six survivors left, this will be brief. But based on some of the talent that is going to be drafted it’s safe to say that my hugs will be long. First on the clock is Bill Simmons … ”

Goodell: “With the first pick in the 2012 GRTFL Survivor expansion draft, Bill Simmons has selected … Alicia, the loud one.”

Kiper: “Curious pick from Simmons there. Clearly he saw something in Alicia that we didn’t during the combine. He may be banking on her putting up big ‘getting injured in an unathletic manner’ numbers as the season winds down, because she clearly doesn’t have ‘kill a mammal’ potential. Wait, humans are technically mammals, right? In that case, I take that back; she might kill Christina at a tribal.”

McShay: “Confusing pick from a usually by-the-book drafter there. Simmons either hasn’t been watching this season or is drunk.”

McShay: “In my opinion, Lisanti just selected the best player in the draft by a long shot … ”

Kiper: [Interrupting.] “You’re right, Hot Toddy! She’s attractive, surgically enhanced, and a self-professed redneck. Her southern charm has her in good with the core alliance left on the island, which will keep her in the game putting up points. But her underlying default setting of ‘pure evil’ could lead to some big ‘successfully make someone cry’ points as the season progresses. Great pick.”

McShay: “You know, I really don’t appreciate it when you interrupt me during my analys —”

Kiper: “Sorry to interrupt — Goodell has the next pick.”

Goodell: “With the third pick in the [fumbles for note card] GRTFL Draft, Connor Schell has selected … Kim, the super-skinny-but-still-somehow-manages-to-be-hot chick.”

(Goodell Hug Breakdown: two cheek kiss into double arm hug, no ass grab, but she’s so skinny it looks as if he was attempting the rare mid-hug reach-all-the-way-around boob-grab. Total running time: 15 seconds)

Kiper: “Kim is going to rack up ‘in control of this game points,’ ‘hitting on the show’s host’ points, and is the only player in the draft that has the ability to turn into a ‘getting so thin that your image no longer registers on camera’ type of player. Great pick by Schell.”

McShay: “I’m not so sure, Mel Mel. When you put the work in that I have coming into the drafts, you understand that the ‘in control of the game’ players are also the ‘about to get backstabbed’ players. Kim has the tools to put up big numbers in this league, but I see her sitting on the sideline for team Lisanti after next episode. But you didn’t consider that, did ya, Old Yeller?”

Kiper: “Old what? You’re lucky Roger is headed to the podium with the next pick … ”

Goodell: “With the fourth pick in the GRTFL Survivor Expansion Draft, Joe House has selected Christina, the oblivious one.”

Kiper: “I’m shocked. I thought Christina would fall much farther than this. She has no alliance, she has no upside and no coitusability. I’m shocked.”

McShay: “Here’s the thing, Melly Mel: In Survivor, the losers win. It’s always the hangers-on, the under-the-radar, and the I-only-wasn’t-voted-off-because-no-one-noticed-I-was-there that end up winning this show. Do you remember the dolt Fabio? That dude named Aras from Exile Island? Brian from Thailand? No, you don’t, because they were all losers. But you know what? They are all champions. Joe House must be making this pick thinking she will go unnoticed … ”

Kiper: “You know what doesn’t go unnoticed? Your condescending tone. Consider this your warning, young man.”

Goodell: “The fifth pick is in. Jay Caspian Kang has selected … Sabrina, the smart one.”

Goodell: “Guys, guys, guys, calm down! What are we even doing here in the first place? This is a draft of cast members from reality television. Anyway, as if this couldn’t get any stupider, David Jacoby just drafted a plastic surgeon who willingly goes by the name of Tarzan.”

Goodell: “Okay, I think that wraps up the GRTFL Survivor Expansion Draft. What was that? No, Tarzan, I’m fine, I don’t need a face-lift. Now, Mr. Kiper, please untie Mr. McShay and let’s just get out of here. Where did that Chelsea girl go? I want to give her another hug.”

Hold the fuck up, there is going to be a Basketball Wives movie?!?!?!?!!? My favorite part of this whole announcement isn’t that it’s based on Shaunie O’Neal’s life, it isn’t the “juicy action-packed narrative,” it’s the fact that this whole project happened because Shaunie “originally reached out to the producer via Twitter.” Hold on! You can just tweet-pitch Hollywood types and get shit made? This information just led me to have an existential breakdown. I can’t decide if I should tweet-pitch “Stripper Fights” to Mark Burnett or “Battle for the Baby” to Jonathan Murray first.

Royce (Basketball Wives, Jacoby), 15 points: Ladies, has your dad ever called you a cougar? No, right? Because in order for your Dad to call you a cougar, you (a) have to be old enough to be considered a cougar, and (b) your Dad has to be creepy enough to be able to use the damn term. Thank god we have Royce the “actress” (5 points) from Basketball Wives, because she belongs to one of the two father-daughter combinations where this eclipse-like event could take place. (The other? Jon Voight and Angelina Jolie.) Anyway, every season Royce brings home a new dude to her poor pops that she swears is The One. This was her dad’s response as she fought back tears (10 points) after trying to sell her father on her man for the third season in a row:

“It’s like you think that you need to be with somebody all the time and you can only find that in a person that is younger. See, a cougar does that. You can’t find anybody that is within, say, five years of your age?”

The man in question is Dezmond Briscoe, wide receiver of the Bucs and admitted sexter of his baby mama. I don’t know much about what is true and what isn’t, but I do know this much: Dezmond Briscoe is going to find his way onto my fantasy football team this season.

Tami (Basketball Wives, Simmons), 10 points: Tami scored 10 points for forcing her daughters to sing, dance, act, and blah blah blah. None of this matters when Ochocinco makes an appearance.

Have you ever opened a bag of roasted peanuts and gotten one of those triplet peanuts? What a nice surprise, right? You thought there would be two little peanuts waiting there for you, but guess what? One of those peanuts totally brought a plus-one and that little dude is welcome at the party. That is exactly what Basketball Wives is like when Chad Ochocinco is on the show. This week we had plenty of Chad Ochocinco and the future Mrs. Ochocinco. So much, in fact, that the this week’s GRTFL Top Five List is the Top Five Quotes From the Future Ochocincos That Cast Doubt on Their Longevity — ranked from “Aw, that’s cute” to “There is a better chance of me marrying my brother”:

(That is so cute. I never thought Ochocinco had this side to him. I totally forgive him for last season’s Patriots performance.)

4. Evelyn: “This is, like, the family room; this is where we are supposed to sit in here with, like, our kids and our family and watch TV.”
Chad: “You doin’ too much.”
Evelyn: “I have to feel comfortable in this space, you’ll be fine, you’ll love it.”
Chad: “Who goin’ pay for it?”
Evelyn: “I’ll pay for it. What, you think I ain’t got no money?”
Chad: “What you think I am with you for? You think I ain’t got no money?”

(OK, maybe he is just kidding here. Let’s give him the benefit of the doubt.)

3. Evelyn: “I don’t know what is going to happen. I don’t know if I am going to be with you for 80 years and not be interested in anybody else. I’m lying to you if I told you that. I’m sorry.”

(Whoa. This isn’t so cute anymore.)

2. Evelyn: “I am going inside, I sat at the hair salon too long to get this wig tight.”
Chad: “I don’t really care about your hair.”
Evelyn: “What you care about?”
Chad: “That [bleep].”
Evelyn: “God Daaaaaammmnnnnn.”
Chad: “What the [bleep]? What, you think I’m marrying you for your hair? No. Sex gotta be part of somethin’ if you want to be [bleepin’] honest. [Bleep] that, [bleep] wasn’t good your ass wouldn’t be here. I am outta here. I ain’t got time for this [bleep].”

1. Chad: “Being able to commit to one individual over a long period of time is new to me. When I am on the road … ”
Evelyn: “Tell me … ”
Chad: “And then what?”
Evelyn: “I want to know [bleep]. Go to the pharmacy and get condoms rather than hide it, because at the end of the day you don’t have to tell me nothin’.”

(Ladies, if you ever find yourself giving your man instructions on where and when to buy condoms for his dalliances outside the relationship while you are planning a wedding with him, it is safe to say he is not “the one.”)

Check back next Friday for more GRTFL updates. Enjoy the weekend!

Video on Demand Report: Starring Madonna and MMA Fighters (Though Sadly Not Together)