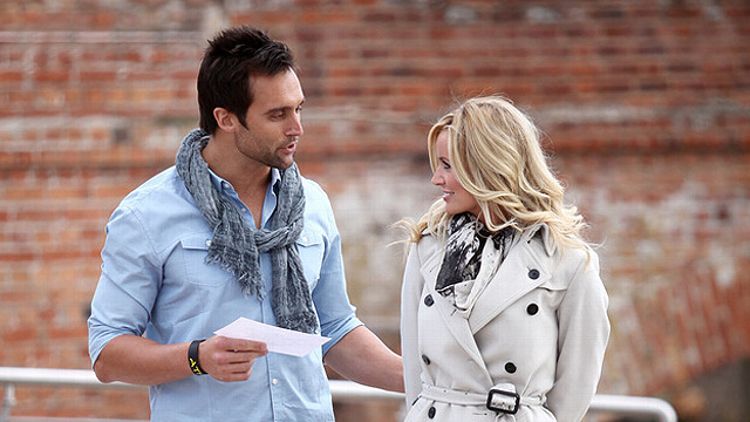 LeBron James’s super-MVPish triple-double domination to clinch the NBA title last night had nothing on what Ryan from The Bachelorette did this week. Like rapper Riff Raff or former president George W. Bush, Ryan is one of those rare pop culture characters that makes you constantly ask, “Is this man one of the dumbest people our species has ever produced? Or is he an über-genius sent from the future as part of some sort of elaborate social experiment?” I honestly can’t tell if the words coming out of Ryan’s mouth are the thoughtless ramblings of a lunatic or carefully crafted comedy, scripted by some of the smartest writers in the world.

Ryan didn’t score any points this week, but if you think that is going to stop me from diving deep into his perplexing performance you must not be very familiar with how things work here at GRTFL Headquarters. Let’s get on with it.

Wolf (The Bachelorette, Connor), 25 points: John Just Call Me “Wolf” put up some points for a teary makeout (20 + 5 = 25 points) with Emily the Mom. But really, who gives a shit? Nothing in the world, not politics, not religion, nor your very own heath, matters aside from Ryan’s list. Sorry Nixon, your list just got sonned by Ryan on The Bachelorette.

While enjoying a nice dinner with Emily the Mom, Ryan reached into his pocket, pulled out a dogeared piece of paper, and announced to a confused Emily the Mom, “I wrote down 12 things that I thought were qualities that I would like in my wife.” What followed was, well … let’s get to it already.

Below is a list of qualities that Ryan from The Bachelorette would like in a wife and my initial reaction upon hearing each one for the first time. OK, fine, more like my reaction after rewinding it and watching it 76 times. Whatever:

1. “Somebody that stands by my side good or bad.”
OK, this one isn’t all that strange in comparison to what’s coming. But I’m not sure if you really want to lead with, “I am going to do terrible things and I want you to support me regardless.”

2. “Logical.”
What? “Logical” is the no. 2 quality you need in a life partner? Logical? And how do you go immediately from “stands by my side good or bad” right into “logical” and not recognize how illogical those two qualities existing simultaneously is?

4. “Encourager.”
He actually skipped three and went straight to four. Please remember that no. 2 was “logical” and no. 4 is barely a word.

5. “Faithful.”
Based on the way he said it, I’m going to say Ryan meant less “has faith in God” and more “won’t sleep with my cousin Steve.”

6. “Nurturer.”
All right, he isn’t even halfway done and he has already used two words that I had to Google to make sure were actually words in the first place. I can’t tell if this says more about his lack of intelligence or mine.

7. “Confident.”
This is the first one that would appear on a well-adjusted human being’s list. But don’t worry, that trend doesn’t last.

8. “Magnetic.”
If someone could put a gun to my head and say, “You have an hour to list 1,000 qualities you are looking for in a wife or I will blow your brains out,” I think “magnetic” would be no. 938 right behind “doesn’t like tomatoes” and in front of “hits on 16s at the blackjack table.”

10. “Somebody that loves to laugh.”
Who doesn’t love to laugh? Who hates laughing? Who is laugh-averse? He clearly is running out of ideas at this point.

12. “Unselfish.”
How did unselfish fall this far on the list? I would say that this is the second one that makes any sense.

So yeah, that was Ryan’s list. Somehow Emily the Mom kicked Ryan off the show and kept some dude that follows his first name with “but you can just call me Wolf.” There is no justice.

Aviva (Real Housewives of New York, Simmons), 20 points: The New York City lifestyle documented on this television program is about as accurate as the depiction of life in Bon Temps, Louisiana, on True Blood. Take Aviva, for example. She makes jokes about her amputated leg (10 points) and she disrespects her husband (10 points), but she doesn’t ride the subway. How do you live in New York and not ride the subway? In fact, this week’s GRTFL is the top five indicators that the New York lifestyle of the Real Housewives is nothing like the New York lifestyle of New Yorkers who aren’t followed around by camera crews and forced to argue with each other for money.

1. They treat downtown like it is a foreign country. Yes, downtown is slightly culturally different than midtown or uptown — slightly. But this week Aviva and Ramona “did the leather for downtown.” It is a neighborhood that is a two-mile walk from your home, it is not something you need to change the way you dress for.

3. “Let’s get a coffee. It’s too early for wine.” They basically spend their entire day drinking wine. I think this statement was less “we shouldn’t drink this early in the day” and more “the places that sell wine are legally required to be closed at this time of day, so let’s wait them out over some coffee.”

4. “I only flirt with husbands when their wives are right next to them. That is rule no. 27.” Carole, I need to know, what are rules one through 26?

5. Face yoga. Face. Yoga. As in, yoga for your face. This is not a Saturday Night Live sketch, it is a real thing these women really talk about.

Travis (The Bachelorette, House), 20 points: Travis got kicked off the show this week and got all cry-y when Emily the Mom gave him the boot (20 points). This is not how Travis thought appearing on this show would play out:

What women in bars will actually say to Travis after being on The Bachelorette: “You were on The Bachelorette, right? I remember you, you were the one that carried an ostrich egg with you everywhere you went. I can’t remember, did Emily kick you off the show or did the producers institutionalize you?”

Doug (The Bachelorette, Connor), 20 points: Doug broke down in tears while discussing how much he missed his son (20 points). As a crier myself, it’s hard to really go in on Doug for getting emotional — but let me just say this: There is crying and then there is what Doug did, which is crying so hard your face looks like it is melting off.

Chris (The Bachelorette, House), 10 points: Emily the Mom has been making out with at least five dudes an episode, and this week while she was making out with Chris (5 + 5 = 10 points) I noticed one of her techniques that deserves to be celebrated. Emily really gets her hands involved. She will caress a cheek, grab some hair, wrap an arm around a waist. I thought I was going to get through this whole graph without making fun of her until I saw this comment in an e-mail from GRTFL Super Scorer Caitlin Mangum: “Have you noticed that Emily always does the Back Rub Hug? Never trust someone who does the Back Rub Hug.”

Arie (The Bachelorette), 10 points: Arie is clearly the favorite at this point. Emily the Mom does her hand move makeout thing with him any chance she gets (5 + 5 = 10 points), but all that is going to change next week when it is revealed that he used to date one of the producers. The best thing about this is that “cast member dating a casting producer” led to one of the greatest moments is reality-TV history, when David from Real World: Seattle was secretly dating a producer and yelled at the top of his lungs, “I LOVE YOU. I LOOOOOOVE YOU. THIS IS THE REALEST THING YOU’VE GOT!”

Right now the realest thing The Bachelorette has is Ryan’s list of wife qualities, which includes “Somebody that is a servant.”

Jef With One F (The Bachelorette), 5 points: After a kiss (5 points), Jef With One F actually said, “I feel like I can open up with you more now. You give me the feeling that people write novels about.” I really hope Jef With One F gets kicked off next week; there is no way I can write about him anymore without offending people and getting fired. No way.