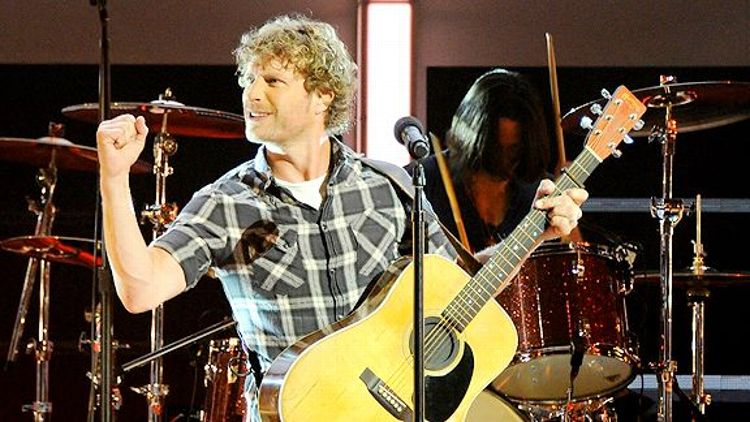 There are multiple Americas and in at least one of them nobody cares about Watch The Throne, techno music, or pop stars whose breasts ejaculate fireworks and/or whipped cream. I’m talking about the “real” America, where the beer tastes like water, the water tastes like chemicals from the old mill, and banjos are a rock instrument. These are the Top Ten songs from Billboard‘s country chart. Love, pain, and partying.

1. Zac Brown Band feat. Jimmy Buffett, “Knee Deep”
Does it never occur to the makers of songs about tropical escapism that it is completely possible to be bummed out at the beach? Featuring Jimmy Buffett, the king of tropical escapism, this song is hilariously manic-depressive, veering between aggressive optimism and brutal melancholy, just like somebody on rum drinks! Grade: B

2. Lady Antebellum, “Just a Kiss”
I encourage you to watch this video for the first minute where the woman in Lady Antebellum stalks the main protagonist with a creepy fixed voyeuristic smile. It’s easy to be snotty about adult-contemporary songs like this one, but they are perennially hits. Earnestness is a dirty word in other genres, but it’s the status quo in country ballads. I like watching these actors who probably just met each other that day pretend for money to be in love on an iPad. Grade: B-

4. Dierks Bentley, “Am I The Only One”
Dierks Bentley looks exactly like Jeremy Sisto (see above). This song has a little bit of a Mungo Jerry undertone to it. I like how, in the video, he shows up at the house party and then gets forced into playing it. This is the song that got stuck in my head the most after listening to all of them. The winner. Grade: A

6. Blake Shelton, “Honey Bee”
When you get down to it, this is a sex jam about pollination. Which is … weird? Natural? Evocative? Blake Shelton’s career got a big boost from The Voice, but I still couldn’t pick his voice out of a line-up. Grade: C

7. Luke Bryan, “Country Girl (Shake It For Me)”
This is the country equivalent of a strip-club rap song. That’s why it asks you to strip on top of somebody’s truck and why the video features the extremely caucasian equivalent of video girls. This isn’t rapping but a lot of it isn’t quite singing either. Suggesting that we get “tangled up like grandma’s yarn” is not very sexy, I’m afraid, even if the sentiment is honest. Where exactly is a DJ spinning this song that people would dance to it? Clubs? Weddings? Boutique Honky Tonks? Grade: B

8. Brad Paisley and Carrie Underwood, “Remind Me”
It occurs to me that Carrie Underwood might be terrible at singing and nobody noticed because she looks like such a real-deal country star bred in a lab. Is she the January Jones of country music? Or can I not tell because this song sounds so obviously pitch-corrected in parts that it’s like a robot is doing Underwood’s vocal runs for her? Incredibly forgettable. Carrie Underwood makes Taylor Swift seem like Chrissie Hynde (which she kind of does anyway — lots of dark eyeliner). Grade: D

9. Kenny Chesney Featuring Grace Potter, “You and Tequila”
This song is about L.A. and name-checks Mulholland. The video might not suggest outright that it is about Chesney’s whirlwind relationship and marriage to Renee Zellweger (or that it was substance-fueled), but it certainly implies it, heavily. This is Chesney’s “Cry Me A River.” Grade: B+

10. Jake Owen, “Barefoot Blue Jean Night”
I can’t condone Jake Owen’s haircut. It’s a shaggy shoulder-length bob, somewhere between the Rachel and Javier Bardem’s bowlcut in No Country For Old Men. I can’t condone this song’s anthemic chorus either, because having people singing along with your chorus in the chorus as a way to evoke stadium rock and “lighters in the dark” is smart, but so cheap. Grade: C+

Previously: True Blood: Evil Woman
Julia Roberts, Angelina Jolie, Madonna, and female stardom
Songs of the Week: Beyonce Gets an Assist From the Roots and an Animated Piano Player