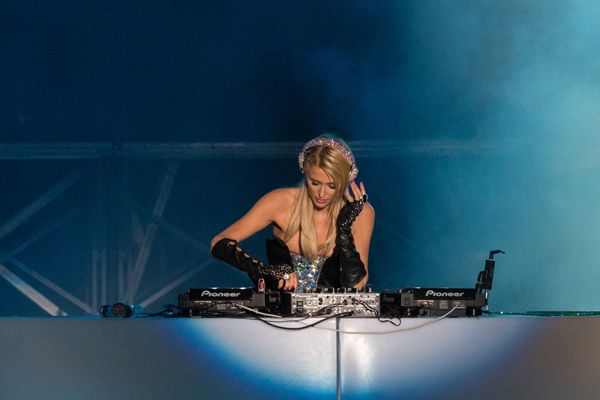 Rembert Browne: The rise of the celebrity DJ is a thing that exists in this world, and if I can be frank, it’s one of the larger scams that exists in an already scam-filled entertainment industry. In spaces across the country (and the world), celebrities are paid big bucks to stand onstage and “DJ,” whatever that even means anymore. As for the rest of us, we’ve been trained to assume, just because they were on a sitcom a decade ago, that they know how to rock a party. Do these feelings stem from a dark but shallow, hater-esque place? Of course, mainly because my dream job is to get paid to inflict my musical tastes on others. But that’s not it. There’s also the fact that the power of celebrity is so strong, we excitedly assume they can do things beyond the scope of their profession simply because they are famous.

I bring all of this negative energy up because this past weekend the scarcely relevant famous human Paris Hilton had her inaugural DJ gig in São Paulo, Brazil. The occasion: a festival dedicated to pop music. The festival’s title: “Pop Music Festival.”

Rembert: This is awesome. It took her 27 seconds to even pretend to touch the DJ equipment, which we have no proof is even hooked up. The way she’s turning those buttons reminds me of the way I play air guitar, which is reminiscent of someone who has never seen a guitar. I think this is a cry for help, Emily, I really do.

Emily: I love how the way it’s recorded makes it look and sound like Paris is just DJing by herself in a giant, empty room. It’s almost kind of sweet, like watching an only child play dress-up, except when I did some investigation and realized that, contrary to popular belief, this isn’t the first time this has happened.. Adding to the childlike quality of this is the curiously ill-fitting top and the prop Brazil flag she busts out at 0:15, which must’ve come in the Klutz “São Paulo DJ” kit that she finally got for her 30th birthday.

Rembert: What’s unfortunate about this clip, though, is that Paris might not be the worst celebrity DJ out there. How does she stack up to some of the other examples of the “art form”? Here are five examples:

Rembert: This is giving me flashbacks to being a freshman in college and thinking I was cool and not being cool. What’s with that face? This is weirdly making me despise Elijah Wood, for the first time in my life. Beyond him and his ‘tude, I have some questions about this event. I know the video is titled “Elijah Wood DJing Amoeba Records 4,” but there’s no proof this isn’t taking place in a coed dorm common room (you know, the one with the printer and the piano and the couch that people would make out on all the time). I don’t like anything about this. I don’t think you could pay me to attend an Elijah Wood Celeb DJ set.

Emily: Yeah, I think I can respect DJ Frodo for his relatively unassuming setup. I kind of prefer this clip of the same set just for the dazzling array of facial expressions he cycles through. I mean, what’s the point of being an actor turned DJ if you’re not going to emote, y’know?

Rembert: So I’m kind of into this one, I can’t even lie. His DJ mannerisms are actually aligning with what’s happening in the music, proof that he could actually be DJing. He’s got his bros behind him, which is always crucial, and most important, the crowd is into it. Maybe those negative thoughts I have toward the craft don’t apply to Danny. Perhaps I owe him an apology. Perhaps?

Emily: I feel like I can’t really judge this. It exists in its own particular Steve Aoki–Cobrasnake-2006-Hollywood-Dancepunk time capsule and I don’t feel like I have proper perspective on that scene yet. I think I hate this, though.

Rembert: Never mind, I take back everything. Just found out two of his DJ aliases are DJ Mom Jeans and DJ Donkey Punch.

BETTER OR WORSE THAN PARIS: Going to go with better, but only if he starts going by “DJ Danny Masterson from That 70’s Show”

Emily: I can’t really watch this closely enough to tell if Tommy Lee is actually doing anything, it’s bumming me out too hard. I pretty much don’t like anything that is going on in this clip: the girl with the fire, Tommy’s butt, Tommy’s pelvic creases, the apparent lack of oxygen in the room. Also, the angle of the camera gives the impression of being slumped in the corner after someone slipped something in your drink and you can’t move your limbs and you have to just sit and watch Tommy Lee’s stupid DJ set until the lights come back on and the cleanup crew finds you in a pool of Red Bull and tobacco juice. There is something very dark and sad about this. I need to take a nap now.

Rembert: If you were to show Tommy this video, I don’t think he’d be able to pinpoint the venue, year, or continent that it took place on. Scratch everything I said about Paris’s DJ set being a cry for help; this is grounds for an all-hands-on-deck intervention. I would follow suit and take a nap, but naps now equal nightmares of the emaciated Tommy Lee persuasion.

Emily: I don’t know if this will show up in the embed, but the YouTube title for this clip is “Alexa Chung Parties at S.F’s Madewell!” That’s a pretty big stretch for acceptable uses of exclamation points. And the word “Party.”

Rembert: Yeah, everything about this is deceiving. If standing next to DJ equipment swaying back and forth makes you a DJ, then currently I’m a bartender, a sandwich artist, and a police officer. Ms. Chung is officially the queen of bored whimsy.

Emily: “I DJ for the love of music, for the love of the joy, and the fun side of music … but I gotta see y’all dance. So stop tweeting, stop takin’ pictures, stop texting, and just fuckin’ dougie.” I hope whoever engraves my headstone has enough room to fit this entire speech on it.

Rembert: I’ve seen Solange DJ before, and while my instinct is to hate on her simply for being famous and DJing, she’s actually pretty good. This sentiment doesn’t stem from her having the most technical of DJ skills, but more from Solange actually having exceptional taste in mid-’90s music. Oh, and she typically looks like a hot Frederick Douglass with sequins on, so that doesn’t hurt. But yeah, I’m still not paying to hear her spin a playlist eerily reminiscent of my Spotify playlist titled “Chillin. Maxin. Relaxin’. Cool (CMRC).” But for free, I’m completely in, cause we’re like totes soul mates.