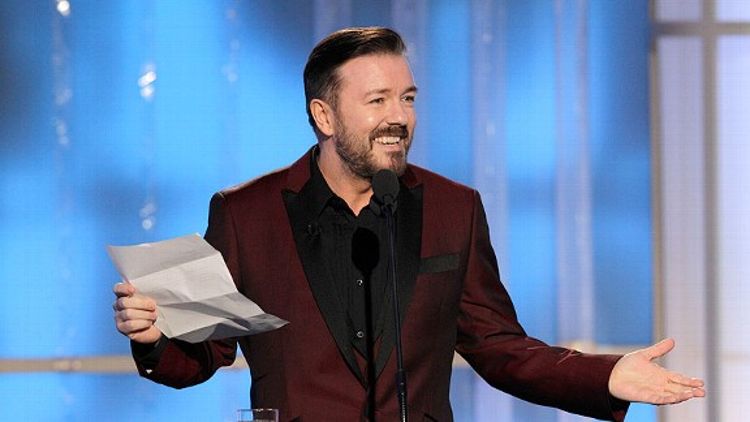 Before we begin, it should be stipulated that awards shows are boring. They have always been boring, and they will continue to be boring until the Earth hurtles into the sun, which will almost certainly occur during the 18th hour of 10,464th Annual Academy Awards Psychocast, finally freeing us of the curious need to complain about why we aren’t more entertained by famous people trading gold statues and listing their business obligations.

The Golden Globes, however, occasionally surprise us by being marginally less boring than other awards shows. This usually is the result of the fact that no attendee is more than an arm’s length from a full bottle of champagne at any time during the ceremony, or the fully stocked, backstage cocaine buffet the Hollywood Foreign Press Association supplies for all presenters. Sometimes it’s because the host, say, a multimultimillionaire British comedian with nothing to lose but 30 seconds of pleasant chitchat with Angelina Jolie at the HBO afterparty, decides to treat the party as a roast. But then everyone loses their shit about how “mean” he is, he replaces the rubber bullets in his clip with tiny hot cocoa marshmallows in his exhaustively hyped return engagement, and vanilla equilibrium is restored to the awards show universe. Congratulations, we’re all snoring before Meryl Streep gets to feign surprise at even the possibility she might win her eighth Globe out of 26 total nominations.

With all of that out of the way, and our expectations appropriately lowered, let’s take a look at the evening’s real winners. (If you require a list of who went home with statuettes, knock yourself out.)

Have you heard about this thing? Odds are you haven’t yet seen Shame, easily the most-discussed showcase of male full-frontal nudity since Forgetting Sarah Marshall, but when George Clooney uses a sizable chunk of his acceptance speech to daydream about the leisurely rounds of cock-golf the two of you might soon enjoy at Pebble Beach, your genitalia has arrived. Soon, Fassbender’s in-demand python will find itself cast as card-counting blackjack ace in Ocean’s Fourteen (after it’s heaved onto the felt and dealt into a hand, everyone’s too busy staring to suspect it’s up to no good), and the victim of a Clooney prank wherein “INS agents” pretend to seize and deport it back to the UK after an anonymous tip about an expired work visa.

In any case, congratulations, Michael Fassbender’s penis, on your meteoric rise to the top of the call sheet!

During a montage of Morgan Freeman’s considerable cinematic accomplishments played during the presentation of the Cecil B. DeMille lifetime achievement award, one moment really stood out from all the Shawshanks, Dark Knights, and Bucket Lists. This is easily the finest singing-Dracula-bathing-in-a-coffin performance you’ll ever see, and we’re counting the one True Blood is planning next season with guest star Nathan Lane in a casket-Jacuzzi bubbling over with Ryan Kwanten’s liquefied entrails.

Strange side-note: If you go to Freeman’s IMDb page, his first “Known For” entry is now The Electric Company. No idea if it was that way before last night, but we’d like to think they’re responding to the hundreds of thousands of “Morgan Freeman casket bath” searches they’re receiving.

The go-to gag of the evening was referencing Bridesmaids star Melissa McCarthy’s explosive, now-iconic bout of sink-directed diarrhea, always a crowd pleaser at Hollywood cocktail parties. (We lost track of the exact number of mentions, but they were frequent enough that you almost expected each acceptance speech to end with a hurried, “Poop in a sink! Poop in a sink!” as the orchestra struck up its impatient cue.) Unfortunately, the awards show zero-sum game dictates that someone deserving goes home disappointed, so: Sorry, Maya Rudolph. Almost no one talks about how heroically you crouched in the middle of the street, billowing wedding dress hiding your bowel-induced shame, and did your naughty business like a lady. Don’t be so demure about it next time. Find a water fountain or something.

… who received an award for playing himself on Showtime’s Episodes. A giant-donged version of himself. Good work if you can get it.

No fewer than three Globes winners bestowed the nickname “The Punisher” on the historically awards-crazed superproducer, a moniker at least as catchy as his previous ones, “Harvey Scissorhands” and “The Guy Who Will Fucking Murder You for Another Sweet, Sweet Taste of Oscar.”

The Dog from The Artist

OMG! Look! A dog! Standing on his hind legs near all those adorable French people! Michael Fassbender’s penis who?