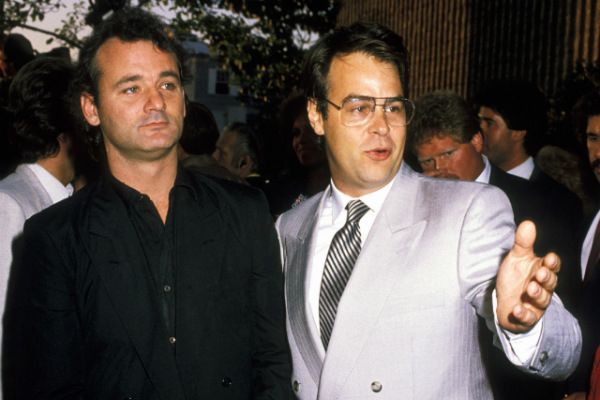 Bill Murray prefers not to sequel. Despite the fact that lifelong friend Dan Aykroyd’s been so obsessed with ramming his Ghostbusters 3 project into multiplexes that the whole endeavor increasingly feels like an insane funding scheme for his burgeoning artisanal-booze-inside-Waterford-skulls empire, Murray has refused to pull on his protoplasm-wicking Venkman coveralls to cross streams one more time with his old bustin’ buddies as long as there’s any chance the effort will feel like a desperate cash-grab. But now it seems that Aykroyd, weary of the years-long standoff, is ready to make it happen without the stonewalling Murray. He tells the U.K.’s Metro:

Is Bill Murray doing it?
No, I can tell you he won’t be involved.

How do you feel about that?
It’s sad but we’re passing it on to a new generation. Ghostbusters 3 can be a successful movie without Bill. My preference would be to have him involved but at this point he doesn’t seem to be coming and we have to move on. It’s time to make the third one.

As resigned as Aykroyd sounds about the prospect of a Murray-free Ghostbusters, it’s difficult not to read this as a final, desperate plea to get his refusnik co-Buster on board. I really mean it this, time, Billy. Look how serious I am, talking to the British press and everything! We’re going to do this without you! Ecto-1 is all gassed up and ready to go! Ramis is here, Ernie Hudson’s waved his nudity rider, and even Slimer’s taking less money up front to make this happen. Don’t be the guy left behind, buddy! We don’t want this thing to open with a Venkman funeral scene. Last chance.

Even with this Hail Mary tactic, it’s nearly impossible to imagine Murray — an American hero, an actor with upcoming Oscar hopes — budging from his principled stance. And so Aykroyd, with a heavy sigh, will be forced to return to Columbia Pictures’s glass development booth alone for another grueling session of trying to snare enough of the fan-propelled hundred-dollar bills and new script pages fluttering around him to assemble a viable screenplay. Those crystal skulls aren’t going to fill themselves with premium, quadruple-distilled alien-hooch for free.