For those of us who do more than just watch TV — the frazzled army that lingers and obsesses over it like Maester Aemon in the library, that gobbles and devours it like a direwolf biting into a Wildling neck — the preeminent emotion during last night’s breathtaking episode of Game of Thrones was pride. Our mangy medium, once relegated to second-class stature, was capable of that? There was a time when the most exotic conflict on television was between an alien puppet and a house cat, when the best special effect was Dennis Franz’s mustache. I’m old enough to remember when the only giant visible on the small screen shaved his head and wore a badge. How times have changed. “The Watchers on the Wall” delivered all the dopamine-soaked CGI thrills of a $200 million summer blockbuster in half the time (and, presumably, less than half the cost). To see something so visually stunning and so relentlessly, unfathomably, occasionally uncomfortably huge on the same box that delivers Sex Sent Me to the ER was both astonishing and deeply gratifying. Forget last week’s debate over the violence and hopelessness that haunt Westeros like wights; take a break from unpacking metatextual metaphors about who, exactly, is dim-witted, beetle-crushing Cousin Orson in this relationship and who are the sorry bugs. For one hour it was possible to understand what it feels like to be his stone. What a rush!

Yet “Watchers” — written by Thrones showrunners David Benioff and D.B. Weiss and directed by Neil Marshall — was more than just a sign that TV can now easily scale movies’ imposing wall. The cinematic flourishes were great, but what truly made the episode memorable were the many ways it celebrated TV conventions instead of flouting them. After all, this is a medium devoted to the slow burn, not the bonfire, and for all its sizzle, “Watchers” was fueled by this steady, accumulated heat. Think of 91-year-old Peter Vaughan spending the better part of four seasons doddering around in the margins as Maester Aemon (né Targaryen — Daenerys would call him Great-Uncle if she knew he was still alive), only at long last to step into the spotlight with a pitch-perfect monologue about romance and regret. Or of Owen Teale, sneering at Jon Snow for years as Ser Alliser, suddenly swashbuckling like a pre-smushed prince of Dorne. Speaking of our favorite bastard, while he swaggered atop the Wall like a Hollywood hero, it was humble Samwell Tarly, well played as ever by John Bradley, who completed his Campbellian journey down in the trenches. All the complicated history Game of Thrones has been sharpening and whittling since day one was finally nocked into the bow last night, and when it was loosed, it flew straight and true.

But was “Watchers” as good an episode as “Blackwater,” its cousin in carnage? (For those who have been dipping into the Dornish wine again: “Blackwater” was the penultimate episode of Season 2 and the last time Game of Thrones devoted an entire hour to a single story. It also marked the last time Marshall was behind the camera.) In a word: no. This isn’t meant as a slight, just the sort of real talk we can engage in after surviving such a dangerous night. Though the Wall is essential to the survival of the Seven Kingdoms, it’s nowhere near as interesting as King’s Landing. A half dozen of Jon and Sam’s doomed brothers had been introduced over the preceding weeks with remarkable economy and skill — I’m talking about you, Axey, Budget Robert Carlyle, Arrow Neck, and That Kid — but they’re still no match for the Lannisters in terms of drama or pathos. (Sure, Janos Slynt was cowering in a storeroom, but at no point did he come close to intentionally poisoning his adolescent son.) No matter how much Kit Harington is able to communicate with a pout — and believe me, it’s a lot — Jon simply isn’t as compelling a figure as Tyrion. Or at least not yet. Both are lovable outcasts, but only one seems capable of enjoying that fact from time to time. (In the first scene of the episode, while patrolling the Wall with Sam, dour Jon wasn’t even able to do his half of the Monty Python bit properly.) Next week, Tyrion faces the gallows. Jon Snow tends to look like he’s never faced anything else. 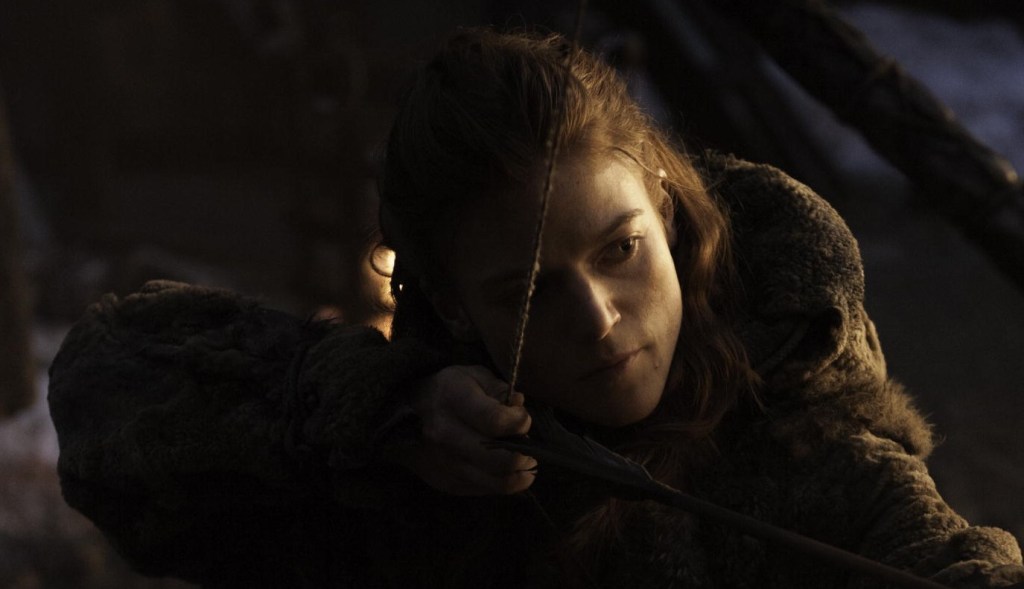 Except, of course, when he’s face to face with Ygritte. It was a sad and sudden end for Rose Leslie’s tough-talking archer. (And yet another cruel lesson about the dangers of hesitation. If there’s one thing Season 4 of Thrones has taught us, it’s this: If you have the kill shot, take it!) Though there was no potential happy ending for these two crazy kids, it still hurt to see them get so close before being forever parted. Their final words, about the prefab Playboy sex grotto they never should have abandoned, were laced with the same sweet melancholy that imbued Maester Aemon’s chat with Samwell. The past is a sweet place to visit. But we can never live there. In George R.R. Martin’s vicious universe, even Cupid’s arrows can kill.

Ygritte’s death hit the hardest, but she was far from the only one to fall. Lives were snuffed out by the barrelful this week, in all sorts of hideous and surprising ways. (I was particularly partial to the giant ice scraper that flicked Wildling climbers to their demise like moths on a windshield.) Even so, blood wasn’t the dominant body fluid in the episode. It was adrenaline. “Blackwater” may have had the irresistible family psychodrama (not to mention the family psychos), but “Watchers” had giants. And barrels of fire. And wooly mammoths. In one of the most bonkers set pieces, it had all three. After the savage Snuffleupagus lit up like a Roman candle and ran off, I loved the sight of the one furious giant — the one whose hairstyle appeared to have been modeled on the unforgettable locks of Jimmy McMillan, the man who once declared that the rent, like the Wall itself, was simply too damn high — lifting the impenetrable inner gate as casually as a contestant on Storage Wars.

This gonzo mania thrummed throughout the extended battle sequence, with arrows buzzing like wasps, axes crashing like thunder. Early on in the assault, Marshall gave us a FPS POV from Ygritte’s swinging bow. Near the end of it, he used a ferocious Ghost to imagine what a live-action movie of my favorite Shinobi game might look like. I was impressed at the delicacy of Marshall’s dancing camera (and its rhythmic interplay with Ramin Djawadi’s pounding drums) even before he went all True Detective Episode 4 on us with an elaborate tracking shot that turned a static set into an M.C. Escher staircase of violence and mayhem. Actually, the filmmaker Marshall most reminded me of in that moment was that known sadist Wes Anderson. I guess Marshall likes playing with toys, too, only his look like this.

It was a relief that the battle of Castle Black didn’t culminate with a surprise rescue, perhaps from a recently enriched Stannis (the one person who seemed to take the ravens seriously at the end of last season) or a returned Benjen Stark (Ned’s brother who went a-ranging in Season 1 and was never seen again). In fact, it never really ended at all. What the valiant 102 (and falling!) brothers won for themselves was merely a breather, the chance to spend another day dreading the coming of the night. (In this way, combat on Game of Thrones is a bit like a seven-game series between unevenly matched teams. An upset is possible in a sudden-death format. But over time, strength tends to win out. Example 1A: Your world champion Atlanta Hawks!) In the end, the most cinematic thing about “The Watchers on the Wall” wasn’t the direction, it was the way it left us gasping for a sequel.

Though it appears the great Ciarán Hinds will be making his long-awaited return to Game of Thrones next week as Mance Rayder, I have a feeling the bigger business will be put on ice until Season 5. (There’s simply too much story to get through in the season finale, from Tyrion’s fate to — hopefully — Arya and Sansa’s reunion.) Jon Snow’s personal ranging party probably won’t be a suicide mission, but neither is it likely to result in some sort of truce. It’s worth remembering here that the King Beyond the Wall isn’t leading his army southward solely for vengeance or to murder some crows. It’s to keep his people safe from the ravages of winter and the terror of the White Walkers. A refugee can look like an invader, depending what side of the border you’re standing on. It’s possible to consider the heroism of the Night’s Watch as an epic story, destined for one of the leather-bound tomes Sam loves to pore over in the library. Or it can be seen as a futile, drain-circling defense of a crumbling institution, one better suited to history books than the new world that’s emerging on all sides of the continent. Night gathers. In just one short week, our watch will end.

[Note on these recaps: I have not read the books, and I have no intention to do so. My goal is to analyze and enjoy Game of Thronesstrictly as a television show. So, please, no spoilers or “I told you so”s in the comments, OK? OK!]

[Further note: Any questions? We will answer them! Email us at askthemaester@gmail.com and come back tomorrow!]