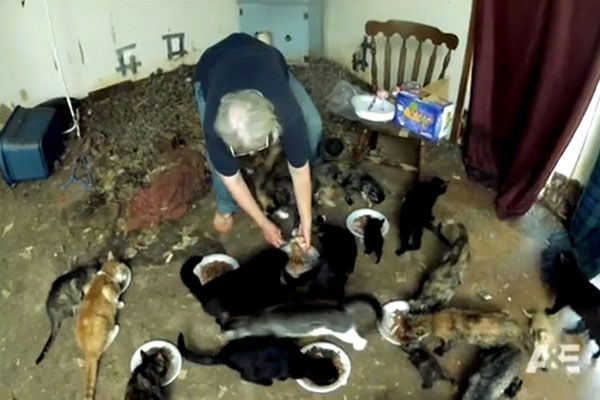 Who Is This Now? Christy and Steven.

Why Are We Watching Them? They have amassed a collection of 5,000 inflatable Christmas lawn decorations.

How Did They Get Here? Many years ago, Christy bought a Grinch inflatable, and noticed that strangers started driving by the house to see it; inspired, Steven declared that their collection would be even bigger the next year. And then it kind of … snowballed. PUN INTENDED.

What’s the Grossest Thing We See? I know you can’t spend people’s money for them, but even if each one of these inflatables was $65 — which the narrator says is the low end of the price range — that means Steven and Christy have spent $325,000 on inflatable lawn ornaments they display for only one month out of the year. Wouldn’t it be more Christmasy to have given that amount to a toy drive? (Also gross is the inflatable in the form of a crucified Jesus — bad taste, but also, perhaps more fit for an Easter display?)

What Have We Learned? It’s possible to love Christmas too much.

Who Is This Now? Cole.

Why Are We Watching Him? He’s pushing the limits of courtesy with his new college roommate, Brian, by moving his grocery haul into their room.

How Did He Get Here? He’s obsessive about couponing, and has been for years.

What’s the Grossest Thing We See? When Cole takes Brian and their friend Danny on a coupon-assisted supermarket trip, Danny has to make a point of how squicked-out he is by even setting foot in the feminine hygiene aisle, where Cole is going to stock up on maxipads (for his mom). Ladies get their periods, Danny! You’re in college: Grow up. But grosser even than that is that Cole has a toddler brother, whose hair Cole’s parents have shaved into a full Mohawk on which they evidently use enough product so that it stands straight up, three or four inches vertical. This kid is MAYBE 4 years old. He is too young to provide informed consent on that hairdon’t.

What Have We Learned? Danny has maybe never touched a girl?

Why Are We Watching Him? He’s walking us through his preparations for the apocalypse.

How Did He Get Here? He fears that a terrorist attack on his hometown of Houston will threaten himself and his family.

What’s the Grossest Thing We See? To test his family on their apocalypse preparedness, Tom arranges for local sheriff’s deputies to stage a mock attack on “The Alamo,” the nickname he’s given to the compound he’s built on a plot of land the size of more than 100 New York City blocks. Only Tom knows it’s a drill; his wife and three children (the oldest of whom appears to be in her early teens, and the youngest of whom looks 6) don’t, and seem genuinely terrified. I guess I shouldn’t be shocked that a doomsday prepper would be teaching his impressionable children to be suspicious of, and aggressive toward, law-enforcement personnel, but I am. Later, Tom shows his sons how to kill a goat, and smears blood on their cheeks, intoning, “Now, this shows your manhood.” His daughter, the eldest of Tom’s children, is not involved in this process until it’s time to dress the animal for meat. I’ve said it before and I’ll say it again: If you’re serious about apocalypse prep, you can’t hobble yourself by reinforcing a sexist division of labor. Not to say I hold with any of it, but if you do, shouldn’t you teach everything to everyone in order to increase your survival odds?

What Have We Learned? Tom’s kids — who, by the end of the episode, have been pulled out of school to be home-schooled instead — have no chance at having good lives.

Why Are We Watching Her? She’s undergoing inpatient couples therapy.

What’s the Grossest Thing We See? Courtney’s therapist, Dr. Jenn Berman, sits down with Courtney and her mother, Krista, to discuss Courtney’s unconventional marriage and her resulting fame, which has grown to the point that Krista now serves as Courtney’s manager and sifts through the offers Courtney receives — opportunities including acting, modeling, other reality shows, and movie cameos. Dr. Jenn tries to get Krista to admit some complicity in cementing Courtney’s “hypersexual image” as her brand and part of the reason Courtney receives the offers they’re describing, but Krista takes no such responsibility: “This is her. Nobody told her to be like this.” She also doesn’t seem to realize what she’s saying when she puts the agency back on Courtney, explaining that there are offers Courtney’s wanted to accept but couldn’t, because — due to her age — they would have been illegal. (Presumably this implies that Courtney would have been filmed or at least photographed naked, which would be child pornography.)

What Have We Learned? Let’s all leave Dina Lohan alone: An even worse momager has emerged.

Who Is This Now? Don.

Why Are We Watching Him? He’s telling the tale of a time he survived medical malpractice.

How Did He Get Here? He had a 13-pound cancerous tumor removed from his abdomen … but that was just the beginning of his troubles. During what is supposed to be his recovery, Don experiences excruciating pain in his chest and stomach.

What’s the Grossest Thing We See? When Don finally decides that his pain is not normal, the doctor determines the cause: a 13-inch surgical retractor that was left in his chest cavity. So … the sight of that thing both on Don’s X-ray and, after its removal, next to the incision on his torso, is pretty rough.

What Have We Learned? If you’re having invasive surgery, ask your physician to use some kind of checklist to make sure nothing gets left in your body?

[Editor’s note: The following Hoarders recap is not for the faint of heart/stomach. Sensitive readers may want to stop here.]

Who Is This Now? Terry.

Why Are We Watching Her? She has hoarded some 50 cats in her home, who have coated every surface with feces; her son Dave has threatened to turn her in to the authorities if she doesn’t make it livable.

How Did She Get Here? Terry’s father died in front of her when she was too young to understand what was happening. Since then, she says, she’s been so afraid of death that she’s had a compulsion to keep things alive.

What’s the Grossest Thing We See? If you have been reading this column since its inception, you know I have seen some truly awful things. I never thought anything Hoarders could throw at me would ever top Shanna, who described eating some of her expired, feces-tainted food as a “blaze of glory.” But Terry is really not well.

FINAL WARNING: The following is so horrible that you may want to stop reading now. I mean it.

OK: In addition to the live cats that have overrun and contaminated her house — one of whom, according to Dave, reacted to all the “ammonia in the air” (from the cats’ waste) in a unique way: “Its eyeballs popped out” — Terry has accumulated “dozens upon dozens” of dead cats in her freezer. But it’s not just dead cats: Terry has also collected other dead animals: a dozen rats in a Ziploc bag, a loose rabbit, a cardinal wrapped in tinfoil. When extreme cleaning specialist Matt Paxton and therapist Dr. Robin Zasio encourage Terry to confront the evidence of her disordered behavior and clean some of the animal corpses out of the freezer, it becomes clear that the freezer is not as cold as it should be: In the tray at the bottom of the freezer, there is a pool of liquid as dark as coffee, which Paxton identifies as “dead cat juice … dead liquid cats.”

What Have We Learned? In this country, you can be allowed to live on your own and look after yourself, even if you were once responsible for the generation of “dead cat juice.”

Tara Ariano displays HER inflatable crucified Jesus on the roof.