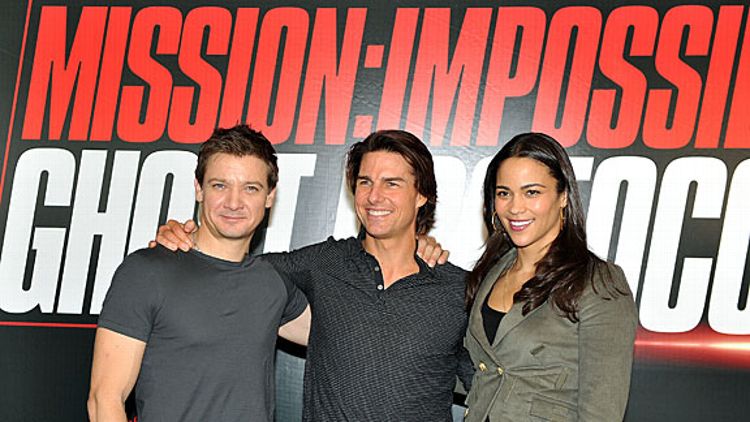 Sacrebleu! Look what the popcorn-eating cinemaphile monkeys over in France have leaked: an illicitly taped first-look at December’s Mission Impossible: Ghost Protocol. Our reaction? Pas mal! Of course, our French is a little rusty (what little we learned all came from Better Off Dead), but luckily we’re fluent in the international language of KABOOM. To sum up: Red Square explodes and it’s up to Tom Cruise’s Ethan Hunt to accept a mission — no doubt a difficult, nay, impossible one — to track down those responsible and, in the process, avert une guerre nucéaire. It’s encouraging to see the professionally harried face of Tom Wilkinson as the guy assigning said mission, and we did manage to pick out momentary glimpses of new IMF agents Jeremy Renner, Josh Holloway, and Paula Patton, despite an editing style that could be charitably described as “epileptic.” (Any concerns that Ratatouille director Brad Bird — making his first foray into live action — might bring some of his trademark slow-build storytelling vanish somewhere around the time Cruise crashes one convertible into another.) How a terrorist bomb in Moscow leads to free-climbing the world’s tallest building is anyone’s guess. But with J.J. Abrams attached as producer and co-writer, we strongly suspect the involvement of a mystery box.

An American trailer — no doubt with fewer smash-cuts of Simon Pegg enjoying a nice, gooey époisses — is set to debut in front of this weekend’s Transformers 3. Until then (or until the litigious cease-and-desist monkeys at Paramount get their way), appreciez-vous.