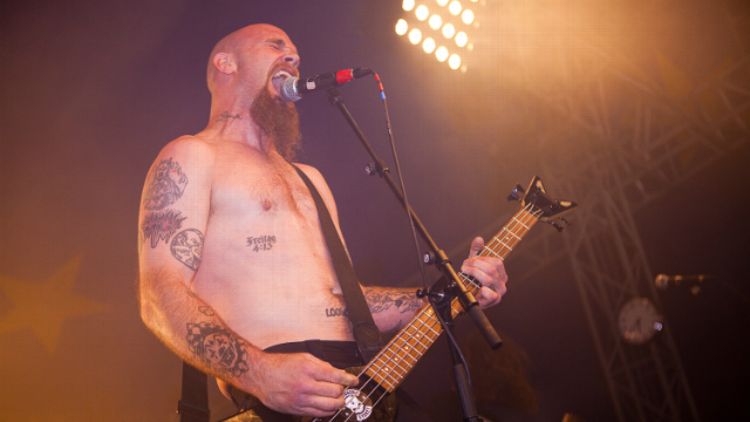 So, the insane story about the time ex–Queens of the Stone Age bassist Nick Oliveri ended up in a four-hour standoff with an L.A. SWAT team reached its denouement Friday, and, incredibly, the legal punishment ended up being the craziest part of the whole saga.

How did we get here again? The pertinent details taken from various media reports are as follows: A little over a year ago, in July 2011, Oliveri (allegedly) hit his girlfriend during an argument. The next day, she returned to the couple’s duplex to pack up her things and move out. Oliveri refused to let her leave, so someone (either the girlfriend or the neighbor, depending on the source) called the police. Oliveri wouldn’t allow the cops into his home, so the SWAT team was called. Finally, after a few hours, Oliveri let his girlfriend go. A few hours after that, Oliveri gave himself up. Inside, authorities recovered a loaded shotgun, cocaine, and methamphetamines. Oliveri was subsequently arrested and charged with, among other things, two counts of possession of a controlled substance with a firearm, two counts of possession of a controlled substance, and one misdemeanor count of resisting, obstructing, or delaying a police officer. Bail was set at $100,000, and Oliveri faced a possible prison term of 15 years.

Based purely on the preponderance of damning media-disseminated evidence, Oliveri’s goose appeared to be thoroughly flambéed. And yet, thanks to a settlement announced by Oliveri’s exquisitely monikered attorney Freddy Sayegh, the 40-year-old musician is walking away from this ugly episode with only three years of felony probation, one year of anger management classes, and 200 hours of community service. He will plead guilty to one count of cocaine possession, and the other felony counts will be dismissed. For a guy whose greatest claim to fame is getting fired from a popular-ish rock band eight years ago, this is quite the fortunate turn of events.

Oliveri getting off essentially scot-free coincides with the 10th anniversary of 2002’s Songs for the Deaf, Queens of the Stone Age’s creative pinnacle, which is coming up at the end of August. As Oliveri is now in life, he was the outlaw in Queens, serving as the pinhead counterpoint to Josh Homme’s coolly aloof leadership persona. It was the Flavor Flav role, a cartoonish manifestation of what the front man could neither abide nor totally divorce himself from. Oliveri also had a little Bob Nastanovich in him, stealing the mic on every fourth or fifth track and screaming and screaming until the plug was mercifully pulled 120 seconds later.

The Pavement comparison is apt, because Queens of the Stone Age really was the Pavement of ’00s commercial hard rock, simultaneously personifying and subverting the form (or possibly personifying by subverting). It worked like this: Homme was the self-aware warrior-poet who mocked rock-star machismo without ever fully shrugging it off. He was the “Queens.” Oliveri was the rabid dog who never got put down, no matter how many people he bit or rugs he pissed on. He was “the Stone Age.” Homme and Oliveri had been honing this Laurel and Hard-on act for years, going back to their days in the pioneering stoner-metal outfit Kyuss. But Queens of the Stone Age represented the full culmination of this unique, then electrifying, and then finally combustible dichotomy. Homme gave Oliveri a whiff of class and brains, and Oliveri doused gasoline onto Homme’s perverse concepts.

The peerless Songs for the Deaf, the greatest hard-rock record of the 21st century, is an oxymoronic goof on soulless modern-rock radio, with interstitial fake-DJ patter offering the funniest parody of contemporary broadcasting in LP form since The Who Sell Out. In typical Queens fashion, Songs for the Deaf spoofed the very format the album’s battery of singles — “No One Knows,” “Go With the Flow,” and the titanic “First It Giveth,” which sounds a lot like a SWAT team trying to bust down your door and swipe your meth, except catchier — were designed to conquer. It was some pretty clever shit — maybe too clever. But the record’s opening track, a finger-jab to the chest called “You Think I Ain’t Worth a Dollar But I Feel Like a Millionaire,” belonged to Oliveri, and it lashed out at skeptics like a crudely lethal shiv. Oliveri was there to make sure nobody mistook Homme as soft, and nobody did. He was the Nicky Santoro to Homme’s Ace Rothstein. Oliveri’s methods weren’t scientific, but they worked.

I had always lamented Oliveri’s exit from Queens of the Stone Age, because even if his creative contributions paled in comparison to Homme’s, the intangibles he brought to the band were sorely missing from 2005’s Lullabies to Paralyze and 2007’s Era Vulgaris. Without Oliveri, Queens of the Stone Age sounded like a really good and yet restlessly “normal” everyday mainstream rock band. Oliveri, for lack of a better term, had supplied the danger.

In 2005, the year after he fired Oliveri, Homme told BBC Radio One that he dismissed his former partner after confirming a rumor that he hit his then-girlfriend. Homme seemed unequivocal at the time about this being the primary reason for severing ties with his longtime friend. “I said, ‘If I ever find out that this is true, I can’t know you, man.’ Because music and my life are the same thing,” he said with his characteristic mix of laconic desert-dude stoicism and stealth sensitivity. Strangely, the story has changed somewhat since then. In a 2010 interview, Homme suggested that Oliveri was kicked out for vague “attitude” reasons, while Oliveri asserted, in an interview earlier this year with Antiquiet, that it was over garden-variety partying.

In the same Antiquiet interview, a surprisingly jovial Oliveri also sidesteps the 800-pound woman-beating elephant in the room in regard to the SWAT team incident. He insists that he only “screwed up because I didn’t open my door.” Only “the smallest little amount” of drugs were found. The shotgun was bequeathed by his late father, and was loaded only because “I kept it like my dad left it.”

I’m a firm believer in not allowing an artist’s personal life to impede on my appreciation of his or her work. Frankly, I simply like too much art that I suspect was created by scoundrels, and I’m not interested in researching their backgrounds to confirm whether I should feel bad about financially supporting them. Besides, it’s the record (or film or book or whatever) I care about, and a record is physically incapable of hitting, murdering, or violating someone.

Oliveri, however, is different. As a member of one of my favorite bands of its era, he was compelling in a primal — if not flat-out primordial — sense. The guy’s whole aesthetic was being a bare-chested signifier of unrepentant maleness. And the SWAT team story (and the buried domestic-violence incident that seemingly got him fired from Queens of the Stone Age) is the messy, decidedly not-funny side of that. It seems clear now that Oliveri is kind of a monster, and that monstrousness informs, at least partly, what I had appreciated about him. Who Oliveri is — who he really is — is now unavoidable whenever I hear every fourth or fifth track on those first three Queens of the Stone Age records. My only recourse, failing the legal system, is the skip button.