Five Questions on American Idol: Why Do They Even Bother Letting the Guys Sing? 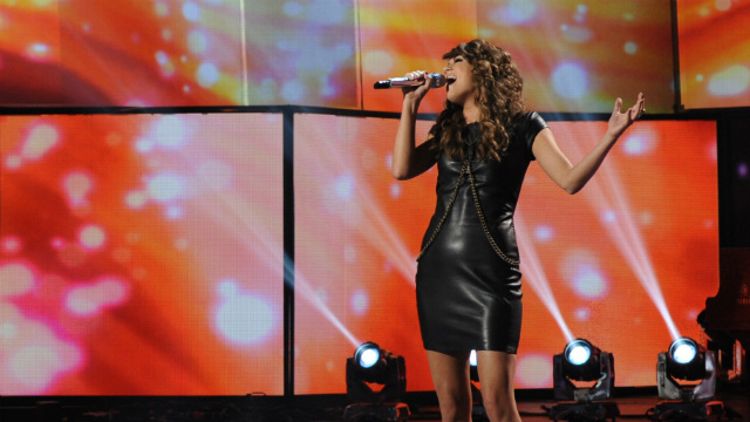 Whatever doesn’t deafen you makes you stronger: Grantland’s Jay Caspian Kang, Mark Lisanti, and Emily Yoshida have returned, bowed but not broken, to tackle another season of American Idol. Well, maybe a little bit broken.

How come Nicki has ditched her wigs and wardrobe? She was wearing a hoodie last night, for crying out loud! Has any other judge ever been late to the show and then showed up in sunglasses before chewing gum on camera? Estimate how many fucks Minaj gives at this point of the competition.

Kang: This was Nicki’s critique of Angela “Angie” Miller last night: “Where did you get that dress? Also, it’s awesome that you know how to walk in heels! You’re perfect.” She has completely checked out, probably because she’s realized that THIS IS A SINGING COMPETITION and she can’t entertain herself by trolling America with Zoanette and Charlie Askew anymore.

So, in answer to your question, I’d say four. She gives four nonflying fucks.

Lisanti: Look: She’s a rookie judge. She hasn’t learned to pace herself yet. As we’ve all learned through watching every minute of every Idol season since it debuted in 1987, this show is a marathon, not a sprint, and you’ve got to hold some things in reserve for the five-month middle portion of the competition. We loved her for bursting out of the gate so strong, swapping out cotton-candy wigs, six-foot extraterrestrial bus driver hats, and lightsaber riding crops every commercial break, but we also knew that pace was tragically unsustainable. So maybe yesterday she found herself sitting on the floor of her walk-in circus wardrobe, paralyzed by the choices — the furry pink stilts are super-fun, but was she really gonna totter around on them for two hours? Hell no — and had a good, exhausted cry. Then realizing she was laying on an old hoodie and was already a half-hour late, she booked it out of there.

Remember, just two seasons ago, Steven Tyler couldn’t even sustain a judges-table erection after the third week of auditions without an external pumping apparatus, which Randy really resented having to operate. But he eventually rebounded, and so will Nicki. She will open the fuck-vault, dive into a shimmering pile of fucks, and emerge with a greedy armload of fuck when it matters. Believe it.

Yoshida: I knew Nicki secretly gave more fucks than she let on when she started comparing Kree to waffles. No other judge in Idol history has been so dedicated to the craft of finding different ways to say “You sing really well” even if it ends up conveniently doubling as her lunch order.

Did Candice Glover best Jordin Sparks’s “I (Who Have Nothing)”? Here is some video to help you with your answer!

Kang: Don’t even need to watch Jordin Sparks’s performance to know that Candice won this one. She’s going to be the best damn cruise ship singer ever.

To be fair, Jordin had her weird posture and an empire waist dress working against her, but yeah, Candice now owns this song and nobody else should touch it again, which is good because I always thought it was weird that it was such an Idol go-to.

Does Angie Miller stand a chance against Candice and Amber without her piano?

Kang: Can we please talk first about Angela Miller’s brand management problem? Why is she “Angie” now? The poor girl already looks like she cried last night when she heard the news about Wes Welker. Why make her even more regional by giving her such a Boston-area nickname? Every time I see her on TV now, I feel like I’m riding the MBTA North to Newburyport on prom night. Angie and her date are heading back from a day game at Fenway and they’re wicked drunk because her boyfriend’s cousin O-Dog works at this bar down on Landsdowne and let them pound carbombs for like two hours. Now she has to get herself into her prom dress and pretend like she’s not hammered but honestly who cares if Principal O’Flaherty catches her because she’s Angie Miller and her dad owns that Chi-Chi’s in Framingham and he drives a ’03 BMW 5 series. Nobody can touch her.

Lisanti: It sounds like someone wasn’t watching the same performance as Nicki. I didn’t transcribe her remarks to Angie word-for-word, but it was pretty close to this: “I love your outfit, your legs, the way you walk in heels, how you look so adorable when you wake up in the morning, how you like, just sip at your hot cawwwfeeee, hey, was that heel thing a little too much? You are a SUPERSTAR, I’m flying to Vegas to strangle Celine Dion for you, that song is YOURS now. You want her show? I’ll make it happen for you, pretty little baby walking in those heels like a STAR.”

Yoshida: I think whoever wrote that question just knew that by simply invoking her name he/she could get Kang and Lisanti to write with a lot of feelings that would hopefully distract from the fact that he/she still feels very little when Angie/la gets up to sing. She did look great last night, though, even though I’m pretty sure if the power went out in the Idoldome they could still light the stage with her teeth. I remember liking “I Surrender” while she was singing it and feeling like she had improved her non-piano performing (even though, as the begrudgingly, usually-correct Jimmy Iovine implied, she is still SO posey) but for me it got buried beneath Candice and Amber. I don’t even care that it sort of seems like bad Idol etiquette to sing someone else’s victory song — the victory song, no less — or that that standing O seemed a little … uh, produced. I could watch ’Burrr sing anything.

I guess we should talk about the guys at some point. Why are they here?

Yoshida: You know, before I started talking about competitive singing here with y’all, it never occurred to me that it was possible to fast-forward through any non-commercial part of Idol. I mean, sure, there was a button on my remote that appeared to have the ability to ease my boredom through even the bleakest of Tate Stevens’s X Factor balladeering, but I didn’t dare use it for fear I would miss some some important nuance that could alter the entire course of the competition. And there was the issue of integrity as a recapper, because if today’s Idol correspondents couldn’t have the decency to watch their own shows, what hope was there for journalism at large? But then one day, on my way home from Idol school, out of the corner of my eye I saw Jay Kang fast-forwarding through entire episodes under the bleachers, and suddenly, fast-forwarding seemed yes, dangerous, but also mysterious and cool. I knew I had to try it eventually, whenever I got the nerve and my parents were out of town.

All this to say, I can’t tell you how good it felt to blow through all but 15 seconds of Devin Velez’s performance last night and five seconds of Lazaro’s (I’M SORRY. HE LOOKED LIKE PSY AND IT MADE ME REALLY UNCOMFORTABLE.) I’m pretty sure I got all the information I needed in the snippet I watched, and if I’m missing some subtle performative detail I’m sure you’ll let me know, but by making that decision I added seconds to my life that are going to be well spent, I promise you. I might get into making preserves.

Kang: I watched last night’s Idol in 14 minutes. Seriously. I timed it and shit. I did manage to jot down one note, because I am a professional. It read: DEVIN VELEZ LOOKS LIKE TINTIN IF TINTIN WAS IN MENUDO WITH RICKY MARTIN. Which is 100 percent true. Slap some breeches on this guy, give him a notebook and a white dog and go send him off to the far reaches of the world, Idol. Please?

Lisanti: As editor, I hereby sentence you to 400 YouTube replays of everything Lazaro sings, for eternity. I am auto-subscribing you to his channel’s feed and I’m checking the view counters. The Recappers Guild may also pursue sanctions. They may pull your pensions.

I think my theory from a couple of weeks ago is starting to look pretty good: The Idol producers are fixing this for the girls. I don’t know how else to explain Paul Jolley.

Kang: I hope it’s Curtis Finch Jr. You tricked me, Curtis! I thought you were the second coming of Jacob Lusk. I didn’t realize you were just a funny little machine that emits little yips and yelps but can’t actually sing a complete song.

Yoshida: I wish it were Curtis, but I don’t think it’s quite his week yet. I’m guessing it’s Lazaro. You can only hold a close-up on a stuttering kid on live television for so long before our pity votes turn into put-us-out-of-our-misery votes.

Lisanti: RIP Curtis Finch. The viewers think you’re 68 years old. And they might not be wrong about that.

Jay Caspian Kang just housed five cahbawms, yes sih.
Emily Yoshida will learn to feel something for Angie Miller if it kills her.
Mark Lisanti doesn’t even own a fast-forward button.

This Is What Happens If You Interrupt Louis C.K. to Compliment His Sexy Boots