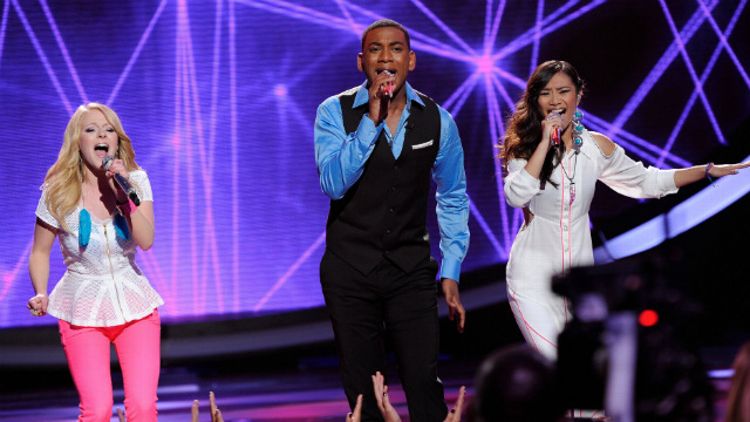 All season long, Grantland Idol ultramarathoners Mark Lisanti and Jay Caspian Kang will answer five very important questions after each performance show. Welcome to Week 380! They haven’t quite broken yet, but they will. They will.

I’m going to restate my question from last week. Don’t you think Skylar Laine is going to win?

Kang: Before I answer this fantastic question, I wanted to share something I noticed about Skylar. She looks like a Bush. Like if George W. put on a big red Judd wig and put on some eyeliner.

Here’s proof. Click here for Skylar. And here for the young W.

This can only help Skylar. I’m sticking with my prediction from two weeks ago — Skylar Laine will win American Idol. Last night, she took a Kellie Pickler song that nobody has ever heard and blew it out. What’s going to happen when she inevitably gets all soft with “Blackbird” or takes on “Boots of Spanish Leather”?

Lisanti: Here’s the thing: Skylar Laine can never be your Nonthreatening Boyfriend. Most weeks, she’s the polar opposite of that, the Angry Girlfriend Who Is Also Shown Firing Large Guns With Alarming Regularity. It’s madness to predict she’s going to be the one who snaps The Streak — we don’t have to get into it, you know who’s won the last four years, how could you not when Lee DeWyze tops the charts for 68 consecutive weeks with “No Not That One (I’m The Other One)?” It’s not that it can’t happen, it’s just like putting $10 on the Blue Jays in early April. You can’t bet the team that’s happy to finish third. So I have to assume it’s going to be Phil Squared, BUT, but, but … I’d go 30 percent J-Chez. Maybe 45 percent. She destroys week after week, to the point where the judges’ reactions are invariably a postcoital snuggling session, with J.Lo draped over Randy’s lap while Steven Tyler feeds them both warm dates from his own mouth. 50 percent. Coin flip? I might go coin flip. Skylar’s third.

Do you like the producers’ decision to create drama/beef between Colton Dixon and Philip Phillips? How will it end?

Lisanti: I’m kind of in favor of it, if only because it’s hilarious to watch them try so hard to crowbar the chillest of bros apart. Jimmy’s done everything but whispered, “Hey, Phillip said you stole your hair concept from that Pat Benatar video. Are you going to stand for that?” in Colton’s ear as he tried to nap, and accused Colton of being the one who changed all the song titles on Under the Table and Dreaming to ethnic slurs in Phillip’s iTunes. But maybe Iovine will finally break them, and it ends with a smashed acoustic guitar, some Wahl clippers jammed with clumps of bleached-blond hair, Colton going Full Naked Kony Meltdown at the Hot Topic in Hollywood & Highland, and Phil taking back all his hearts on Colton’s Instagram feed. Ugly scene. I don’t know, every bro has his breaking point.

Kang: I’d go sit in that Hot Topic to see that Colton meltdown. I’d imagine a lot of plastic skulls and Korn T-shirts would be involved and it would end with Colton renouncing Jesus and tongue-kissing his sister. Then I’d laugh and laugh and laugh because it’s funny to see the suffering of a fake-earnest, fake-punk, fake-nice kid. In a related question, do we only watch this show to air out our high school frustrations? Didn’t you hate the Colton Dixon of your high school? And isn’t that why you hate Colton Dixon now? It has nothing to do with Colton Dixon, does it?

Is Jessica Sanchez the most vocally gifted contestant they’ve ever had on the show?

Kang: Based on just pure vocal talent? Yes, yes, yes. I don’t know how her career is going to pan out, but there’s no question she will (a) make millions of dollars, (b) sing hooks on hit hip-hop tracks, and (c) show up on every VH1 Divas Live for the next 10 years. She’s gotten to the point where her slightly “meh” personality doesn’t matter anymore. I don’t think she’s going to win, but she’s going to sell records all over the world.

Lisanti: It’s safe to say that at this point. She’s pretty boring, but that doesn’t matter much to her career prospects; they can always send her to Rihanna Boot Camp in Barbados for a month and scuff up the personality a little. And not that it has any bearing whatsoever on eventual professional success, but J-Chez (still not on board with the wack BB Chez business) could win this thing if the judges’ weekly carrying on about her talent makes the tweens feel like they’re stupid to not vote for her.

Is Philip Phillips in trouble?

Lisanti: I want nothing more out of this season than to be rid of him. I feel like a crazy person shouting “STOP BEING DAVE MATTHEWS! THE WORLD HAS ONE OF THOSE!” at the TV every week, or begging Jimmy to finally bring down the Dave hammer on him at the coaching session. At this point I’d even settle for a Tommy Hilfiger puka necklace intervention. The world is fucking insane. Someone PLEASE JUST SAY SOMETHING TO HIM. Derisively whistle a couple of bars of “Ants Marching.” SOMETHING.

He still wins it all, though. (Unless J-Chez does.) Team Phil².

Kang: I recently went back through my archives and realized just how much we’ve written about this show. It’s easy to forget, but Idol has been going on for about as long as the NBA season. It’s loooooong, and as such, you need to stage your “journey” properly. The problem with Philip Phillips is that he hasn’t changed at all. You’re right — he just does Dave Matthews, and when Dave Matthews isn’t appropriate, he just sort of scowls, does Dave Matthews again and raises an eyebrow, as if to ask, “Is this any different?” No. It’s the same. All Philip Phillips had to do to win was sing one really good rendition of an old gospel/soul standard. Instead, he’s moving into Maroon 5?

I’m going to revise my previous pick and say P-Squared goes home in third, behind BB Chez and Skylar.

Lisanti: Bottom Three: Elise, Hollie, and, in a shocker, Joshua. Hollie goes home; they let her talk too much last night, her noncommittal accent weirds people out. Pick a lane, gurl.