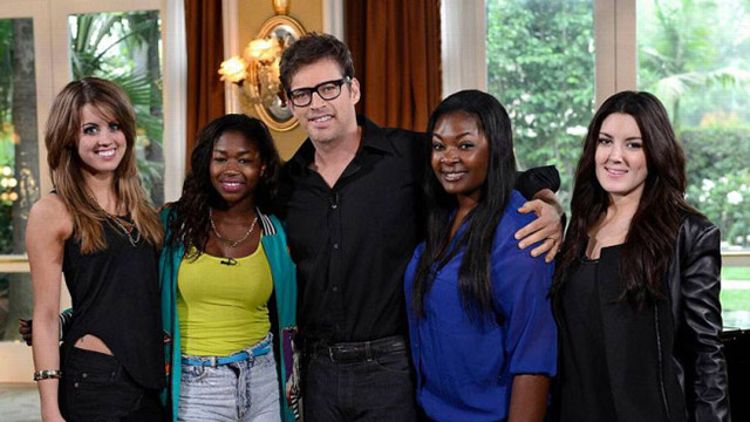 May 2, 2013
by Emily Yoshida, Jay Caspian Kang and Mark Lisanti

Whatever doesn’t deafen you makes you stronger: Grantland’s Jay Caspian Kang, Mark Lisanti, and Emily Yoshida have returned, bowed but not broken, to tackle another season of American Idol. Only four contestants remain. (Again.) But the end is in sight.

It must be asked: Is this the worst season of American Idol ever?

Kang: It sure feels like it! Which is strange, because there are two contestants with clear talent (Candice and Angie), a wackadoo judge (Nicki Minaj), and Mariah Carey (Mariah Carey) being weird. So why has this season, which started off so promisingly, slowed down to a death march? Here are three theories.

Lisanti: The theme weeks, the terrible song selections, the interminably padded running time, they’re all symptoms of the greater problem: The show refuses to evolve. Every year, they make the tiniest changes to the format, but they’re always cosmetic, sparkly Band-Aids on a gaping head wound. The producers continue to think they’ve hit on the magic formula, so why mess with it? To some tiny and tragically short-sighted extent, they’re right — despite its diminished ratings, it still wins its night, and they all go to sleep in mansions warmed by money-burning furnaces. But the product itself is beyond stale; it’s ossified to the point that Ryan Seacrest buffs his cheekbones on its husk.

There was something instructive in last week’s story about the failed plot to eject Mariah and restore J.Lo to the throne, explaining why Nicki, the one fresh thing about this season, will probably get tossed: “The core viewer is a Midwestern, Southern, older woman who is threatened by Nicki’s aggressiveness.” There you have it: Every time we complain about yet another backward-looking theme week, or a bafflingly out-of-date song selection, a grandmother in Kansas or Tennessee is squealing with delight. And then she drops dead when the camera cuts to Nicki dressed as Martian Cleopatra, communicating with her home planet in the Cockney accent she learned from BBC signals beamed into space.

I guess that doesn’t directly answer the question about whether this is the worst season. I think it has to be almost by default. It’s a year older, a year weaker, a year closer to a mercy-killing. They’ll shuffle the judges’ panel yet again, and next year we’ll be lamenting the same problems once the novelty of surrounding Randy with David Lee Roth and a Madonna hologram wears off, and we’re suffering through the 400th iteration of Motown week.

Wait. David Lee Roth and a Madonna hologram are judging next year? Holy crap, it’s going to be the best season EVER.

Speaking of which, why isn’t Candice breaking out the diva anthems? Her song choices these past few weeks have seemed weird, no?

Kang: Maybe it’s demographic research? Like maybe she realized that she had already locked up the base of voters who would want her to sing Mariah Carey and Mary J. Blige and Etta James and has branched out to pick up swing voters who might otherwise vote for Amber or Kree? This might be mathematically smart, but it’s really killed Candice’s early momentum. How many songs is she going to sing that I have to immediately Shazam? And how long is she going to highlight the nuances of her phrasing, her voice control and all the other impressive things about Candice that have started to bore America? Just belt one out already, Candice. Might I suggest:

(By the way, has anyone else noticed that the videos for “It’s All Coming Back to Me,” “I Would Do Anything for Love” and “Unbreak My Heart” all have the same basic story line? FALSE FLAG!)

Lisanti: I’ve given up trying to understand song-selection logic at this point. I write off virtually every decision to the show’s diminishing budget. “Sorry, we don’t have the money for a Whitney or Mariah this week. Here, sing this. Bruno Mars’s label agreed to pay our catering bill if we did one of his songs.”

Yoshida: Oh, I liked Candice doing the Bruno song, and I don’t like Bruno Mars generally. That song is a big hit right now, also. Your Shazam is rolling your eyes at you. I thought everyone had good 2013 song choices, except for Kree, who I think has room-temperature milk in her veins. Candice’s less bombastic song choices are a contingency plan for the event in which she wins, which at this point looks more and more likely. There has to at least be a glimmer of hope that she could do something forgettable with David Guetta and make one million dollars.

Harry Connick Jr.? Are the Idol producers trying to tank the show on purpose?

Yoshida: They could have just said “Here’s your mentor for the week, this guy” and it would have had the same effect. Connick was not a bad mentor by any means (though perhaps Angie’s parents would beg to differ after he all but declared a tickle war on her during their rehearsal time), and I especially liked when he revealed to Amber line by line what a fucked-up song “My Funny Valentine” is, but this was clearly for the most faithful long-term audience demographic the show has, the over-60s. (God, I wish that was a category on The X Factor instead.) At least they didn’t even bother to get the interview line where each of the contestants talked about what a dream it was to work with so-and-so. If this show just wants to be two hours of old people teaching young people Cole Porter songs (i.e., real music) every week, that’s cool, maybe just change the title and put it on Ion TV or something.

Kang: This was a straight-up play to ensure that Angie makes it into the finale. Connick is there to remind the olds that it’s great to be attractive and play the piano and wouldn’t you know it, here’s this attractive young lady (nudge nudge, she’s also white) who sings and plays the piano!

I mean, if The Voice could turn that Charlotte Sometimes girl into a big-enough star that she plays morning talk shows and puts on concerts, Angie Miller should at least be able to reach those heights, right? I can’t see Kree or Amber or even Candice achieving the same success. If Idol still even cares about the career success of its winners (given the effort they’ve put into Lee DeWyze, it seems like the answer is no), they should be pushing Angie hard.

Lisanti: Connick’s appearance was clearly olds-pandering, but he was not a good mentor. He was a GREAT mentor. “Do you even understand what you’re singing?” Come on, that is some high-quality tough love, and something that seems totally obvious but still needed to be said. He actually made me miss the mentoring weeks they’ve all but done away with this year.

By the end of the show, the whole thing felt like a tryout for next year’s panel. Maybe because he actually came out and sat with the panel. And then immediately started a fight with Randy, who rose to the bait for a few seconds before realizing he was actually engaging with his environment, curling up in a ball underneath the table, and hibernating until next season.

Did Angie Miller have her moment with “Someone to Watch Over Me?”

Kang: It wasn’t Fantasia’s “Summertime.” It wasn’t even McPhee’s “Somewhere Over the Rainbow.” Or Bowersox’s “People Get Ready.” But not for lack of effort. I mean Angie really wanted to make an Idol moment happen and she definitely waved her arms a lot and opened her eyes up real big and stared very meaningfully into the camera like she was telling you that she was sorry, but they had run out of Bloomin’ Onions for the night, but would you like to try to the appetizer sampler instead and because of the inconvenience, how about a round of Blue Hurricanes on her?

Yoshida: Nicki’s questionably enthused “Disney Princess” line buried whatever hopes Angie had of that. If an Idol contestant has a moment and nobody gives a standing ovation, does it make the 10 o’clock news? On a season that has leaned a bit too heavily on the judges’ standing ovations as an indicator of an “important event” (which I can imagine would be VERY helpful during fast-forwards, not that I know from experience), Mariah didn’t even attempt to unstick the end of her train from the wheels of her Aeron chair after Angie’s “I Feel Pretty” moment. Also for a certain generation, this song will never not remind us of insurance commercials.

Lisanti: The best part of this season ending will be not having to sit here helplessly while the two of you throw jagged rocks at the future star of Disney’s Broadway adaptation of Bambi. (Disclaimer: This website is owned by the Walt Disney Company, which does not have to pay me extra for having all the great ideas.)

I can’t even describe how vindicated I’m going to feel when she wins it all. It is these meaningless, hollow victories that make life worth enduring.

Yoshida: My guesses mean nothing. Kree.

Lisanti: It would be insane to pick anybody but Amber, but Candice was also in the bottom two last week, and due to the rules of the GIANT SHOCKING TWIST, they’re going to add the vote totals [falls asleep, tumbles off deck chair, drowns in pool].

Jay Caspian Kang has the lyrics to “MacArthur Park” tattooed on his back.
Emily Yoshida does not possess psychic powers.
Mark Lisanti drowned in a pool.