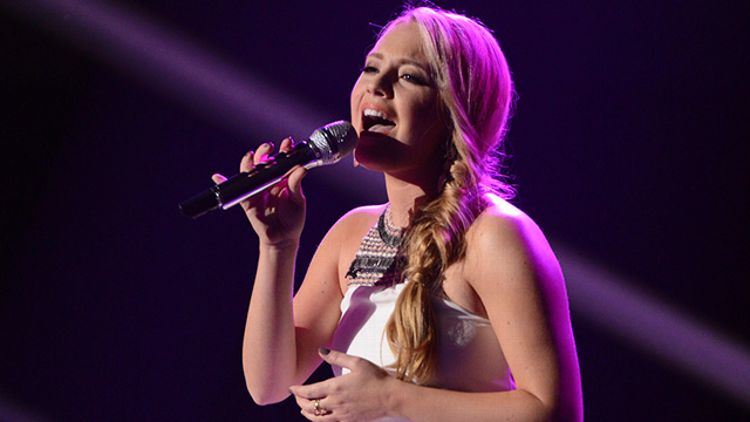 Whatever doesn’t deafen you makes you stronger: Grantland’s Jay Caspian Kang, Mark Lisanti, and Emily Yoshida have returned, bowed but not broken, to tackle another season of American Idol. They’re down to nine contestants, and will not rest until there’s just one remaining, because that’s how it works.

It was Beatles Night, because Paul McCartney woke up in a cold sweat, realizing he doesn’t have all the money. How do we feel about theme nights? Is this one any better than, say, Elton John Night?

Kang: As a Korean-American, I’ve seen my fair share of Beatles karaoke, specifically “Yesterday,” which is such a popular standard in nostalgic, weepy Korea that for a while in the early ’90s, every album that was released by the then-nascent Korean music industry had to feature a cover of “Yesterday.” So if anyone can judge Beatles karaoke, it’s me (and maybe Emily, who seems to spend more time than is really healthy in karaoke bars in Koreatown).

Angie Miller was the worst offender last night. That girl must wake up every morning and yell, “Thank God, it’s pageant day!” because there hasn’t been a week yet where she hasn’t come across as the brassy, annoying girl who doesn’t understand why the cool girls who smoke cigarettes in the bathroom (for some reason, this archetype has been completely replaced in my head by Busy Philipps’s character in Freaks and Geeks) keep making fun of her. Ang, it’s because you need to effing RELAX a bit. Stop turning every song into some technically perfect homage to everything your vocal coach taught you.

Lisanti: As good as some of the individual performances turned out, there was something about Beatles Night that made the show feel even more like overblown karaoke than usual. Maybe it’s the “sing it at a 5 thing” Kang theorizes. Maybe it’s that Beatles songs are perfect gems that resist the violent and unnecessary buffing of televised singing competitions. Maybe it’s that they don’t lend themselves to reinterpretation by desperate people strangling a microphone because they feel their one shot at stardom slipping away.

Somehow, it was still better than Disco Night, Billy Joel Night, Country Night, and Songs About the Ford Fusion Night. But worse than Jimmy Iovine Goes Through His iPod and Picks Out Some Songs He Forgot Were on There, Wow, Let’s Sing This One, Who Remembers Willa Ford? Night.

Yoshida: At least on Billy Joel Night there could be a somewhat rational explanation for why none of these kids had ever heard their songs before Jimmy Iovine blasts them from his Beats by Dre™ Pill that doesn’t make us feel a million years old. (Seriously, I grew up with the Beatles because my mom grew up in the ’60s, and I’m not good at math or anything, but I think that means that the Idols’ parents grew up with the Jonas Brothers.) There can be times when coming in without the baggage of years of hearing these songs is actually a benefit — Burnell was the best example of this last night, resisting the uncontrollable urge more reverent singers usually have to oversing the hell out of “Let It Be.” But the opposite problem also happens — even Randy noticed that Devin couldn’t go five seconds on “The Long and Winding Road” without tacking some sleepwalk of a run onto it. That’s something you do when you don’t realize that the song you’re singing has a history and that millions of people — mostly all the old people watching American Idol — have a history with it.

There’s also the problem with the lurking weirdness in a lot of Beatles songs; none of these kids is on this show because they know how to be weird. Billy Joel and Elton John make for a better Idol night because for some reason or another, the contestants always seem to be able to lock into those songwriters’ mentalities pretty easily; the parallels between that and a contemporary artist like Lady Gaga or Katy Perry seem more easy to draw.

Did Janelle sneak in at the end and give the best performance of the night?

Kang: Yes, but she’s got dead eyes like Dustin’s wife on Eastbound & Down. America will never truly connect to a girl who doesn’t sparkle, at least a little. Remember the five weeks when Carrie Underwood smeared glitter on her face, Aqua Netted the shit out of her hair, and wore leather pants? I just can’t see Janelle va-vooming at that level and appeasing the 15 horndog males who watch (and recap) this show. Of course, this isn’t fair. Living eyes shouldn’t be the requisite for stardom in America. But Idol is arbitrary, above all things.

Lisanti: Arguments could be made for Kree’s “With a Little Help From My Friends,” or Amber’s “She’s Leaving Home” (she va-voomed it), or Angie’s “Yesterday.” But those arguments are ultimately invalid. Janelle won the night. They knew what they were doing when they put her last. Even Randy paused from tweeting “pls kill me. 12 seasons too much. come here and put the dawg down” long enough to recognize that she’d reasserted herself in the competition. Don’t underestimate any performance that restores his will to live, however briefly.

Yoshida: I still think Candice climbed the taller mountain by nailing “Come Together,” but Janelle did very, very well. I don’t think Janelle’s ever going to get va-voomy; she’s basically going to be a shampooed tween country Bowersox, which is a great way to get more votes from the not insignificant shampooed country tween voting block. I think Jay might be missing the sparkle when he fast-forwards through the post-judging Ryan chatter; I noted a couple of weeks back that she seemed to have inherited her former country rival Rachel Hale’s bubbliness after taking her down in Vegas. I’m also worried that “dead eyes” means “not huge Angie Miller puppy eyes” but that’s a double-edged sword because if you’ve got big sparkly pageant eyes, it’s easier to look into them and see just how far back the emptiness goes, whereas I feel like if you try to measure Janelle’s emptiness, there’s still a pretty wide margin for error at this point.

This is a tough one: If the only way to get rid of Paul Jolley or Lazaro were to also send home Candice Glover, do you do it? Could you live with yourself?

Kang: Who’s Paul Jolley? I just fast-forward through the dudes now, save Burnell, who I just watch for his crazy diva hand motions, which are kind of like watching somebody miming how to make handmade spaghetti. (I highly recommend this practice, by the way.) Lisanti’s theory about the producers stacking the deck so that a girl wins this time is gaining more and more credibility as the show goes on. Unfortunately, there just aren’t that many talented girls this year. Blergh. Gonna go watch Crystal Bowersox videos for the next 10 minutes. Will be back.

Yoshida Was not aware that the stacking of the girls was still in “theory” status, though we had bumped it up to “laughably obvious truth.” With that in mind, no, losing Candice is in no way a fair trade for slightly expedited relief from the Mediocre Male Mafia. Paul Jolley will not be your American Idol. They’re just cannon fodder; they’ll be out of our hair soon enough. One of them, I suspect, tonight. Patience.

Lisanti: OK, what if lashing Candice to ALL of the guys and putting them on a rocket aimed at a distant solar system’s flickering sun is the deal? Do you do it then? I like Burnell and Devin, but a four-for-one trade seems more than fair.

Still not convinced? It would shorten the show by five weeks. I think even Candice makes this deal; she seems like a giving person who would be into the idea of making our lives easier.

Did you use your new SuperPowerUltraVote to vote for Angie Miller 14,000 times? If not, why not? Are your ears broken and your hearts full of ash? She even used the flat iron!

Kang: The flat-ironing of the hair was a good move. She no longer looks like a cocker spaniel.

Lisanti: Kang, this is where you were supposed to put your pageant rant. Always read ahead before firing that bullet.

And now Emily will talk about how Angie doesn’t make her feel emotions. But nothing moves her except Skrillex scoring a buzzsaw fight between C-3PO, Data, and Megatron in the BattleBots arena.

(For the record: I do not vote. We are here to dispassionately observe a gladiatorial contest, not to affect the outcome.)

(I paid a Bangalore vote-farm to cast 14,000 ballots on my behalf. It’s untraceable; don’t try to prove it.)

Yoshida: The flat-ironing of the hair was not a good move. Now she just looks like a wet cocker spaniel.

I was more or less on board with this performance; I started to go to a very 94.7 The Wave place of chillness and acceptance with it, until she stuck that big note in the middle of the song for no reason other than to remind us she can shout. It’s fine to show off, Angie — this is American Idol after all — but if you ever want to be as big a star as Sonny John Moore, you gotta know when to drop the bass.

Who’s going home this week? Better yet, rank the contestants. They rank them now; so should you. Then say one nice thing about Mariah Carey.

Lisanti: Taking into account the entire body of work, with extra weight to last night’s performances:

Good night, Paul Jolley. Enjoy the tour. And try not to get too upset when Curtis washes his socks in the sink. He’s old-school; it’s just his way.

Also, it’s nice that Mariah didn’t demand that she sit upon an actual throne behind the table, or that eight clean-shaven eunuchs in silk loincloths feed her peeled grapes before each evaluation. She’s a judge of the people.

Yoshida: Based purely on last night, here’s my ranking:

Although I didn’t predict Curtis’s elimination last week, I thought he deserved to go home, and I think Paul deserves it equally this week. The whole understacking-the-deck on the guys’ side has made for an unusually fair sequence of eliminations in this early half of the game. This, of course, cannot last long; I’m predicting at least one girl goes home before Lazaro, at which point if Ryan Murphy doesn’t march across the lot, clock Lazaro over the head and drag him back to the McKinley High set (“Congratulations, buddy! The game’s over! Don’t you remember? You won a recurring role on Glee! Shhhhh, now wear this blazer.”) then nobody wins. Least of all Ryan Murphy.
Mariah’s under-eye highlighting makes her look like she’s telling a ghost story. Ghost stories are cool!

Kang: I think Devin Velez goes home. There’s no rationale for this except my own dislike of Devin’s weirdly earnest performances. But, hey, it worked last week when I said Curtis Finch Jr. would be gone, so who knows?

Mariah Carey’s “Always Be My Baby” is one of the best pop songs ever recorded. It’s actually better than 95 percent of Michael Jackson’s songs. And she was really the only person who could sing it at that level. Whitney would’ve melodrama’d the hell out it, Celine would’ve sucked out its soul, and Mary J would’ve turned it into a glorious mess. Is that nice enough?

Lisanti: I just realized we got through this entire thing without once invoking Nicki Minaj’s name.