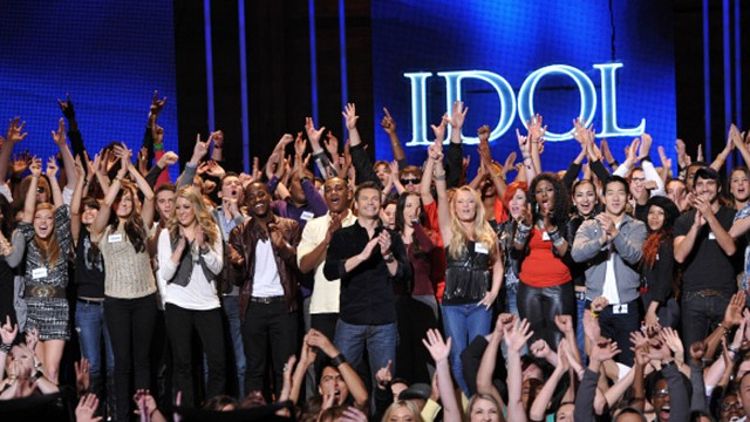 Will Johnny Keyser’s cockiness end up derailing his chances in the competition?

Kang: This is the second time we’ve seen Keyser and he’s already picked up every overconfident lounge-singer affectation. He’s got the head-cock, puts his voice through needless runs, and when he smiles, it’s because he thinks it’s funny that a poor person is in pain. There’s no question he’s got one of the best voices on the male side, but he’s never going to win over the 30-year-old blogger vote with that attitude.

But it’s not just us. America hates overly confident people. It’s Puritanism’s worst stain — nobody can ever just admit when they’re good at something without feeling the wrath of the trolls. And because Idol is a show of the masses, there will certainly be a week when Jennifer says something to Johnny about being “maybe too confident.” America will listen to their middle school teacher and vote off Johnny way, waaaay too early. In the Idol movie, he will be played by Christopher McDonald.

Lisanti: He oozes overconfidence. Or is it just earned confidence from a life of being so handsome that his greatest hardship is choosing which tight T-shirt best accentuates his pecs? He is essentially Musical Schmidt. But if we’re being honest, we’re both annoyed because when a Ken Doll comes out blasting Otis Redding’s voice, it’s just another reminder of how unevenly God distributes His gifts, and we remember how when He got to us, He just kind of shrugged, like, Sorry, pal, all out of the good stuff, wanna blog?, so he’s definitely not getting our bitter-ass vote. And you know it’s going to turn out that after he’s done with water skiiing practice he volunteers at a children’s cancer ward, and we’re going to look like the shitty ones. Ugh, we’re so screwed when he wins. You think he’s going to get into content farming, too? This guy is a total nightmare for us. Oh, shit. Look what I just found. I’m not going to sleep tonight.

On a related note, do you think Heejun Han’s modesty is an act?

Lisanti:Something definitely smells off with his theatrical humility. You want to believe he’s being sincere, but then he’s doing this business: “Everyone’s sooooo tall and soooo pretty.” Tall? Really? But the one fatal flaw in the character is being from New York. Had he chosen a different origin city and then come out with the glasses/skinny tie ensemble, and then carried on about the height thing, he might have pulled it off, and we’d write it off to quirk instead of perfidy. But he got too bold with it. (In retrospect, the table-cozy he knitted for the judges in the first round should’ve been the tip-off.) He’s probably writing a secret Tumblr about what credulous idiots we are right now. Why are he and Johnny Keyser trying to kill us?

Kang: I’m searching Tumblr right now and asking all my cousins if they might know him. He’s taking a page out of the Melinda Doolittle playbook — if you remember back to the worst season in Idol history, Melinda was the lifelong backup singer who had always been too shy to ever take the lead. In one of the bio reels, they showed her wearing a T-shirt that read, “I’m shy.” What the fuck is that? The whole shy thing was obviously a ruse. Melinda was a backup singer because she did something terrible to one of Barry Gordy’s nephews.

Heejun’s certainly trying to do something similar, but it’s never once felt genuine. He’s actually worse at being fake-modest/overwhelmed than Melinda, who sort of pulled it off until about the fifth or sixth week of live performances. The bigger problem, though, is what is he going to do when he runs out of Michael Bolton songs? Go to Mark Cohn? How many Mark Cohn songs are out there? I can only think of “Walking in Memphis” and that other one whose title I can’t remember.

Lisanti: The only way I could be less onboard the Phillip Phillips tour bus is if he suddenly downgrades his Dave Matthews/flip-flops/growl combo to the Jack Johnson/bare-feet/chill-vibes package.

And I’m with you 1,000 million percent on Reed Grimm. The level of unconscionable bullshit he is perpetrating surpasses even that achieved by Norman Gentle, the all-time Idol Look At How Offbeat I Am! champion. But at least Norman had the courtesy to show up in Mork aerobics drag so we could immediately know not to bother paying attention.

Kang: Hey man, Jack Johnson can surf. And Phillip Phillips dressed up for Hollywood Week! He looked like a waiter at P.F. Chang’s, but at least he was trying? I prefer him 10 bazillion majillion mazillion percent over Reed Grimm, who has a good shot at becoming my least favorite contestant of all time. I hate anyone who does something unexpected, announces that it’s happening, and then gives you that look that indicates that you’re supposed to share some inside joke — Hey, I know you didn’t expect this, but here it comes. It’s the look bad magicians give their elderly audiences. Or the look the annoying rich kid gave back in elementary school before announcing his dad had bought him a Neo-Geo. We shot bottle rockets at that kid until he cried, and I’m still proud of it. Anyway, that’s the look Reed Grimm gave when he announced that he was going to sing “I’ve Got a Golden Ticket,” from Willy Wonka, just two weeks after he “wowed” America with his version of the theme song from Family Matters. What else are you going to desecrate, Reed? Is the Golden Girls song next? He also has the world’s second most punchable face, trailing only “The Face of that old guy with terrible hair who plays the teacher on Glee.”

Kang: There was about a year there back in elementary school when it was my favorite song. But my parents only listened to classical music and the soundtrack from Cats, so I had no frame of reference. Say what you will about Marc Cohn (does anyone say anything?), but he somehow came up with the perfect blend of Billy Joel, Elton John, and a bag of candied penises. And it even holds up well. Every time I hear “You’ve got a friend in Memphis,” I feel pretty good about myself.

Lisanti: I’d really like nothing better than to take this journey with you, but there was never a moment I harbored any secret love for that song. I’m not taking the snob road here; I will admit to loving all kinds of truly indefensible garbage. Just yesterday I was defending “Blame It on the Alcohol” with less than 15 percent of an irony buffer. And “Memphis” isn’t even garbage; I’d probably like it more if it were — it’d be more fun. But to me, it’s “Life Is a Highway” with a piano and slightly more metaphorical nuance.

Was David Leathers Jr. singing Celine Dion’s “Because You Loved Me” the ballsiest move in Hollywood Week history or did it prove my theory that Mr. Steal Your Girl has no actual balls and will live forever with his beautiful voice? Don’t you think the constant hitting on girls is just a cover-up for the fact that he has no testes?

Lisanti: It’s a very weird and uncomfortable place for me to play the part of Mr. High Road, but for real, maybe you and I need to not be so obsessed with the contents of various falsetto-leaning contestants’ scrotal sacs. I’m not talking cold turkey here, but on the next podcast we’re devoting — at most — just three more minutes to this. Fine. Seven minutes, but then we’re through with it until the Top 12, and then we can start outlining the Finals Castration Special.

Kang: It’s going to be Idol‘s very own steroid scandal. If you think about the world’s overpopulation problem, the growth of singing competitions, the fame of Bieber, and the fact that castratos live forever and never develop acne, don’t you think that it almost makes sense at this point to just go ahead and lose the luggage, as they say? If I had that voice, I’d consider doing it. Just use the old steroid baseball logic: “David Leathers Jr. has mouths to feed and everyone else is doing it, so what the hell, bring on the curved knife.”

Jay Caspian Kang knows that Fake Jay Kang was better.
Mark Lisanti is still waiting for Jay to give him his Super Bowl T-shirt.