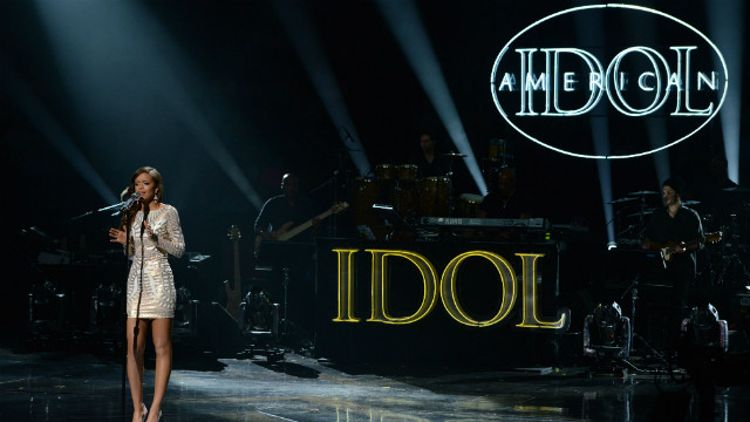 Whatever doesn’t deafen you makes you stronger: Grantland’s Jay Caspian Kang, Mark Lisanti, and Emily Yoshida have returned, bowed but not broken, to tackle another season of American Idol. Join them as they continue to ponder the ineffable mysteries of Vegas Week.

Who was your favorite from the girls group?

Kang: I still believe in Candice, but there are only so many Aretha, Gladys, and Whitney songs America can handle before they send you off to go headline dinner boats in Boca Raton — FIVE NIGHTS ONLY! FORMER AMERICAN IDOL CONTESTANT AND 10TH-PLACE WINNER CANDICE SINGS DIANA ROSS SONGS AT YOUR REQUEST! — where some old bluehair shakes her cane and yells at you to shake your hips more during “Can’t Hurry Love” because that’s how Diana Ross did it and she didn’t pay $14.95 to see this shit. And then before you know it, you’re the 2 p.m. karaoke host at the Chumash Indian Bingo casino and what’s worse, the 3 p.m. host is named Mandisa and she’s as good as you and even did better on American Idol back in Season 5 or whenever.

Which is too bad. But at some point Randy is going to say, “You know, I just don’t know if you’re current enough, but I love you, dawg, you remind me of the old times!” and the other judges are just going to solemnly agree and Candice will book a ticket to Fort Lauderdale.

FULL DISCLOSURE: I watched this episode on a delayed flight from Boca Raton to New York City surrounded by blacked-out drunk geriatrics. They all passed out 15 minutes after the flight took off and it never occurred to me to raid their pillboxes. So there’s that.

Lisanti: Since the start of this season, my new life philosophy has been, “When in doubt, just do whatever Nicki Minaj tells you.” Yes, this has resulted in me leaving the house wearing a yellow top hat festooned with rainbow propellers on more than one occasion, and another incident where I nearly slapped a barista who insisted I try the sugar-free vanilla syrup, but this Minajification of my daily decision-making process generally has been a huge life upgrade. Nicki had destroyed every contestant prior to Aubrey Cleland, but finally came alive when confronted with somebody who checked that “current artist” box they’re so obviously desperate to fill to interrupt the Cute Semi-Talented White Boys With Guitars But No Real Career Prospects reign of terror. If Nicki’s happy, I’m happy. We serve at the pleasure of the queen.

Yoshida: Candice Miller is the “correct” choice here, but Zoanette doing “Circle of Life” is the “right” choice, and Zoanette flipping out during Vincent’s performance is the “only” choice.

I was less impressed with this week’s batch of girls than the first week’s, but if all goes as it ought to, I think we have a pretty great Top 6 girls, any of whom I’d be fine with winning the title. (My predictions/picks: Candice, Kree Harrison, Amber Holcomb, Angela Miller, Janelle Arthur, and ZOANETTE.) I felt bad for Janelle picking that terrible Band Perry song, but I still think she’s a pretty strong dark horse to win, and seems like she could be your BFF who happens to have a great voice, which is a very strong point in her favor. The rest of the girls this week all felt like Voice cast-offs. Juliana Chahayed was like a cross between Drew and Melanie Martinez, but without any of the edginess/manic Jesus energy. Not that it matters — these types of girls never win anyway.

Who was your favorite of the guys?

Kang: I’m starting to agree with Yoshida about Nick Boddington. He’s like an incredibly complicated origami figure that you just want to smash with your fist before laughing in the face of the artist who just spent 15 hours folding the damn thing. But he was the best singer last night, I guess. Which is a problem when you’re sitting next to two tanked olds on a JetBlue flight who keep whispering something that you’re 80 percent sure is about your ethnicity and Steph Curry is in the process of scoring 54 points on the other channel but you have to keep watching “MALE” week on Idol because it’s your “job.” DISCLAIMER: I LOVE IDOL! AND MARK LISANTI!

This is not answering the question, so I’ll just say that I’ve enjoyed Burnell Taylor in the past and I’m a bit worried about his get-up and how he finally crossed over the “NBA Nerd” line, but he’s the best shot we’ve got.

Lisanti: I’m not going to get too attached to Nick because he might suffer from that glass-bones disease, and I worry that an ill-advised fist-pound from the Dawg will fatally shatter him. Maybe next week they can have Boddington perform inside some sort of protective bubble, or even a Lucite Hannibal Lecter cage, to stop Randy from accidentally killing him with the physical power of his enthusiasm. I bet the acoustics inside it would be astounding. And we’ll make sure it’s big enough to fit a piano.

Let’s go with Vincent Powell this week. He’s sturdier and more fun, and it feels like it’s been a long time since anybody from the guys’ side could make it rain middle-aged panties in a way that didn’t feel illegal.

Yoshida: Ditto for Vincent. That last note was bonkers. I would like to see him do more stuff like that as long as Keith Urban never says the words “Preach out, brother Vincent,” again. I now have a vision which I will try to Secret into reality of him and Charlie Askew battling Voice-style in the middle of a group performance of “A Little Help From My Friends” and just screaming at each other until Nick Boddington dissolves into a fine powder right there in the front row, no Dawg-pound necessary. (In my vision, the powder is the same stuff they use to coat latex gloves.)

Is it just me, or is there some kind of early selection conspiracy to ensure that a girl finally wins this year? The girls group has been roughly 1,000 times stronger the last two weeks.

Kang: I think you mean “hotter.” The girls’ group has been 1,000 times hotter than in years past except for the year they brought that girl in from Jersey who had those naked photos pop up on the Internet and then denied any involvement. Honestly, I don’t care how hot these girls are or how “commercial” they might be or how quickly Nicki Minaj would sign them to a recording deal because there was already a much better show about signing and developing talent and it was called the Chappelle’s Show’s parody of Making the Band. So unless Mariah is going to force Angela Miller to go get her a bibimbap from her favorite Korean spot on 6th and Normandie or unless Curtis Finch Jr. proclaims, “Who are the five greatest singers of all time? Think about it: Curtis, Curtis, Curtis, Curtis, Curtis,” I have no interest in watching Idol try to convince us that this girl or that girl could be the next girl who sings two hooks on Flo Rida tracks and then disappears forever.

Yoshida: If that’s their goal, they’re actually doing a pretty well-thought-out job … the inclusion of Aubrey Cleland and Breanna Steer, for all the “I’d sign you now” praise, seemed a little bit like throwing chum into the water to ensure that Kree and Candice and the less conventionally hot girls don’t get eaten by the vote sharks. Aubrey and Breanna were not flawless enough singers to get away with being attractive. Style will not get you anywhere as a girl on Idol — whether it’s some studded bodycon Spanx worn on the outside, or a guitar and a Joanna Newsom on Kidz Bop vibe. The only thing that will make teenage girls divert some of their speed dials to a non-male competitor (even if there are no hotties this year!) is if they can tell themselves “Well, you gotta admit, she’s, like, really talented. I don’t really like her, but I guess I have to respect that.” (THIS HAPPENS OUTSIDE OF IDOL, TOO, MINUS “TEENAGE” AND “SPEED DIALS.”) The only surefire way to be the first female American Idol in X years is simply to never screw up, and never not smile during any non-singing moment. Easy.

Lisanti: At this point, I would take Zoanette singing a different Disney song with frightening intensity every week over any of the guys. [Disclaimer: This website is owned by Disney, and frighteningly intense versions of Disney songs are piped into the Grantland office at all times. Once per day, we sacrifice an editor to a guy in a Simba costume.]

The girls, of course, are doomed, for all of the reasons Emily said. Maybe the next “surprise twist” the producers spring on us will be gender-weighted voting so that Angela Miller or Candice Glover have a fighting chance of making the finals. I don’t think I can stress enough how gigantic a disaster it would be to crown another Phillip Phillips. I used up all my Dave Matthews jokes last season.

Did the judges make any big mistakes this week?

Kang: I’m not sure how I feel about Mariah going down the Xtina–on–The Voice path and squeezing all her excess baggage into a tight dress and pushing it all up to the top so that everything explodes out a low neckline like a Pillsbury biscuit tube. I mean, I know exactly how I feel about that move (it’s awesome and was the only reason I watched The Voice last year), but I’m not sure if it’s really sustainable for a human being who needs to breathe regularly and also deflect talk that she’s by far the worst judge.

Also, Keith Urban said “timber” when he meant “timbre.” Then again, it must be hard to sleep next to Nicole Kidman and the sound of all that crinkling skin, so maybe we can give him a pass.

Yoshida: Putting Lazaro through, on which I will not elaborate further so that I don’t accidentally say something needlessly mean.

Lisanti: R.I.P., Melinda Ademi. Know that Yonkers is rioting in your name. (DMX is sitting this one out due to parole-violation concerns.)

What is the name of the “emotion” on Lazaro’s face when he sings?

Kang: Everything from 0:30 on in this video.

Jay Caspian Kang raided all the pillboxes.
Emily Yoshida just shaved her head in solidarity with Nick Boddington.
Mark Lisanti awaits further instructions from the Nicki in his head.