Five Questions on American Idol: The Top 8 Time-Travel to the ’80s 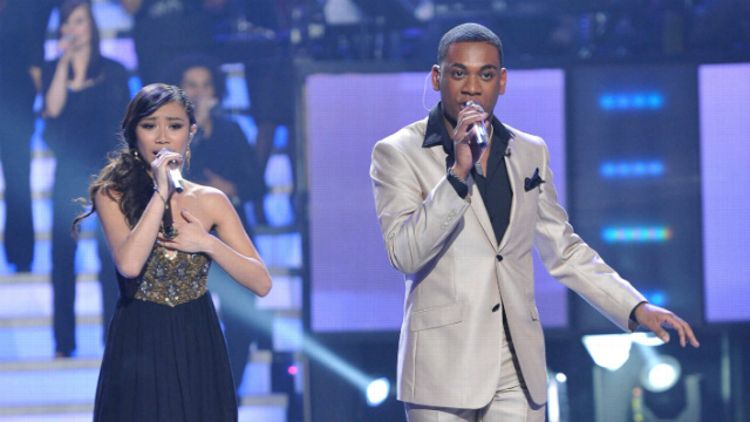 All season, Grantland Idol experts Mark Lisanti and Jay Caspian Kang will answer five very important questions after each performance episode. Jay is on assignment, and, unfortunately, he took usual standby replacement Fake Jay Kang with him as a body double for safety reasons. On such short notice, we could only book Bizarro Jay Kang for today’s pinch-hitting duty. Please welcome him to Five Questions on Idol.

Now that we’re down to the Top 8, we pretty much know what we’re going to get from each of the contestants from week to week. So who was the best on ’80s Night?

Lisanti: It was a coin flip between Jessica Sanchez and Joshua Ledet. On the one hand, you had Sanchez casually crushing some Whitney with “How Will I Know,” and while that was a safe and utterly unsurprising choice, points must be awarded for how good she was. So good, in fact, that I’m a little bit afraid that Lopez is going to sabotage her one of these weeks, kidnap her after convincing the other judges not to use their save, and trap Sanchez in her home studio recording booth, feeding her a subsistence diet of Triscuits and coconut water while forcing the 16-year-old to ghost-sing every lead vocal on her next album, the multi-platinum I Am Finally Ready to Share My True Voice.

And then there’s Joshua, who blew my mind by choosing a Simply Red (!) song. OK! As usual, he sang the ever-living shit out of it, draining it of all life force in three soul-drenched minutes, then casually tossed its desiccated husk on top of the judges’ table. During the standing ovation, I think Steven Tyler was hiding an erection behind his Coca-Cola cup. So: advantage Ledet, though barely.

Bizarro Jay Kang: I don’t see what you like about that Joshua Ledet character. He sings with way too much “soul.” I feel like every time he does a song, he’s trying to take me on an “emotional journey,” and I really don’t like that in my music. I need a little more clinical detachment, an emphasis on virtuoso precision. Can he do a Dream Theater song next week? He’s wearing me out with the soul stuff. Anyway, out of last night’s performances, I guess I have to pick Colton Dixon; at least he pays that kind of craftman’s attention to his wonderful hair, which was expertly dyed blond this time. Kudos to him; he’s a huge talent.

Who blew it last night?

Bizarro Jay Kang: Please take this in the spirit of respect in which it’s intended, but didn’t I just tell you that Joshua Ledet wasn’t my cup of tea? I’m sorry if that came off too harshly, but that’s how I feel. Your turn, sir, to offer an answer in the same spirit of mutual respect, even if our opinions differ.

Lisanti: I’m really done with Colton. That mid-tempo “Time After Time” was terrible. Just terrible. I wish Jared Leto would disappear on some vision quest so that 30 Seconds to Mars could swoop in, install Dixon as their front man, and reinvent themselves as an emo-Christian supergroup. That’s where this is all going; let’s not dick around with Cyndi Lauper covers and upset Olds like me.

Is it difficult for you to watch Jessica Sanchez try to brand herself as “BB Chez” when you’ve spent several months developing the far superior J-Chez personal brand for her?

Lisanti: Kids! They always want to do everything themselves, even when a perfectly good thirtysomething Svengali is offering up his mentoring services free of charge via the Internet. I just hope she’s not getting bad advice from someone close to her. There’s probably some shady uncle who’s already set up some offshore bank accounts in anticipation of embezzling the fortune that’s soon coming to her, and by early next year he’ll be living on a private island in the Maldives while Jessica’s doing Outback Steakhouse commercials to keep her family afloat.

Bizarro Jay Kang: It’s clear you wrote this question for yourself, so I’m not going to offer an opinion, even if I might feel in my heart that “BB Chez” is perhaps the superior brand. [Zips up lips, tosses away invisible key with a puckish look on his face.]

How do you feel about Randy Jackson’s new catchphrase, “He’s gotta have it!!” which has apparently replaced “He’s in it to win it!!!!”

Bizarro Jay Kang Oh, it’s delightful! Randy always brings such an infectious enthusiasm to the show, it just slays me when he comes up with things like this! I hope he’s still anchoring the panel through Season 24. I’m four-hundredy-million-billion percent yes on this new turn of phrase!

Lisanti: I hope he’s not sued by Cold Stone Creamery. He must’ve had a really great waffle cone of Birthday Cake Remix before last night’s show.

Bizarro Jay Kang: Was that a fat joke? Seems beneath you. Don’t listen to him, dawg, you’re doing great!

Lisanti: Hollie, Elise, and in a mild shocker, Skylar. Elise is finally going home; it’s felt like the judges’ incredible enthusiasm boosted her out of the danger zone over the last couple of weeks, but after they went suddenly lukewarm on her “I Wanna Know What Love Is,” the audience is going to feel like they have permission to ditch her. Expect a lot of “Everyone’s so good at this point in the show, we have to make impossible choices” talk, and no save.

Bizarro Jay Kang: I consider “predictions” a form of low-level witchcraft, and as such, I won’t take part. How about instead we spin this into a positive and wholesome direction, and advocate that they bring back somebody eliminated earlier in the season? I’d love to see Adam Brock return. Break me off a piece of that white “chocolate”! Can I get a fist-bump? Yeah!

Mark Lisanti feels so, so alone.
Bizarro Jay Kang can’t wait to curl up with a copy of Fifty Shades of Grey tonight.

The Fake Boobs and LSD Epidemic on Teen Mom ... and Other Horror Stories From This Week's Tabloids

Survivor: One World, Episode 8 - When the Going Gets Tough, 'Just Annihilate Them'