Fiona Apple at Largo: “My New Songs Have Been Done for a Year” 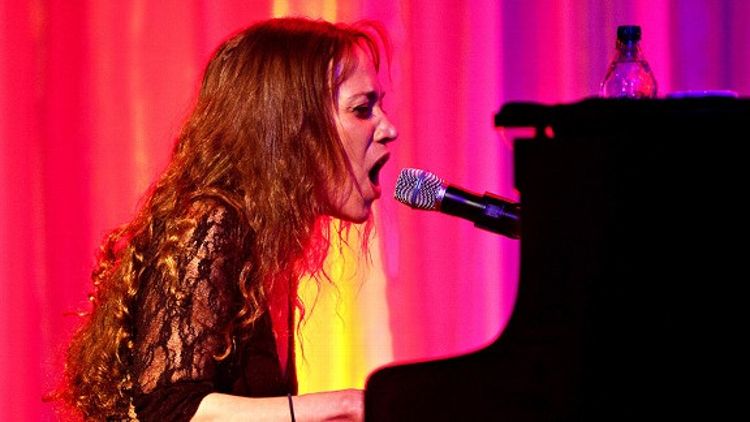 A few months ago, I went to go watch Jon Brion at the Largo Theater here in Los Angeles. Brion is a notoriously eccentric composer and producer — his credits include Kanye’s Late Registration, Aimee Mann’s I’m with Stupid, and the soundtrack to Magnolia. Which is all very impressive, I suppose, but the reason why I went to watch Brion at the Largo was because I had heard that every once in a while, Fiona Apple shows up to play a few songs. (Brion also produced Apple’s When the Pawn…) Sadly, the show’s guest was a totally okay woman in thick-rimmed glasses who sang a bit blandly about Tina Fey and wanting babies.

Brion’s set started shortly afterwards. There were somewhere between ten and fifteen instruments on stage. Brion, of course, managed to play all of them. And although he did this just fine, the show was never anything more than a very skilled man playing a bunch of instruments very skillfully. There’s a fine line between genius and the convincing affectation of genius and Brion, with his Glenn Gould humming, his somewhat funny jokes, his constant futzing around and his ejaculatory guitar playing, fell safely on the bad side of that spectrum. Walking to my car, I said that I felt as if I had been assaulted by the insistence of talent and then said something very silly and Holden Caulfield-y about how some people should stay behind the boards and play the guitar tracks very skillfully, but they shouldn’t see success in these endeavors as reason to stand behind the microphone. Brion, I said, was like the pianist in Catcher in the Rye, dazzling and sparkly, but thoroughly vapid.

And so it was with some trepidation that I went back to the Largo to watch Brion play a set with Fiona Apple. I am 31, so Fiona Apple happened at just the right time, right when I got a driver’s license and a Car Discman, when my sprouting nihilism and adolescently dark worldview needed its very own heroine. Preferably in panties and dark eyeliner. Apple brutally filled this role. The sullen seventeen-year-olds of America had no idea if she was going to be okay or how long she would stay in our lives or really what was wrong, but Apple stood in as our beautiful, Plathian fantasy. Unlike the neutered, absurd #manicpixiedreamgirls who followed her, Fiona Apple was a fucking sex bomb — it wasn’t just the “Criminal” video, it was the throaty, pained voice and the ever-present threat that one day you would wake up, roll over in bed to discover that Fiona Apple had up and left.

What would the marriage of Apple and Brion bring? In the studio, they had produced When the Pawn… and had started work together on Extraordinary Machine, but would Brion’s obnoxious, self-indulgent stage antics overwhelm the audience’s memory of our favorite sullen girl?

Only sorta. And not because Brion didn’t try — he certainly played his share of silly acoustic guitar licks and kept up the spontaneous, “Hey, I didn’t even plan anything cause I’m a genius!” affect from his solo show. But it didn’t really matter, because although Apple and Brion spent at least half the set arguing over what song to play next, flipping through notebooks, and eating yogurt, Apple still managed to overpower the theatrics with a vocal performance that I will not soon forget. The woman standing on the stage at the Largo bore almost no resemblance to the Fiona Apple of my adolescence — she was much, much thinner — nearly skeletal — she wore a vaguely Arabian green silk dress and a massive orange wrap that had been lined with sparkles. More importantly, the voice had changed — Apple’s voice on Tidal was deep and carried an air of contempt. The new Apple had less power, but as she sang through a series of very old covers — the sort of songs that are played on 45s in stores that only sell very expensive mid-century modern furniture — her voice bent and cracked and warbled in perfect synchronicity with the lyrics. (At one point, a fan requested new material. “I can’t remember [how to play] any of my new songs because they’ve been done for a fucking year,” Apple replied. “Not her fault!” said Brion.) By the third song, I was actively rooting against the past. This new Fiona Apple was so much better, so much more nuanced and thoughtful. At some point, she sang Cliff Edwards’ “Night Owl” with that massive orange wrap tightly secured around her shoulders. When she got to the chorus, “I’m a night owl,” she widened her eyes and spread out her arms, revealing the sparkly lining underneath, and flapped a few times.

We pace our aging through our favorite pop stars — an old favorite song heard on an oldies station lets us feel the passing of time more urgently than any physical ailments. The process goes forward in fits and spurts — one day, I will read that Nas has turned 50 and I will look in the mirror and notice, for the first time, just how gray I have gone. Most of the audience, I’m sure, had come to the Largo to paste their memory of a nineteen-year-old Fiona Apple over the older, frailer figure on stage. I certainly had. Last night, as I watched Fiona Apple perform with such humor and artistic maturity, part of my past very calmly, yet hurriedly, walked itself out the door.