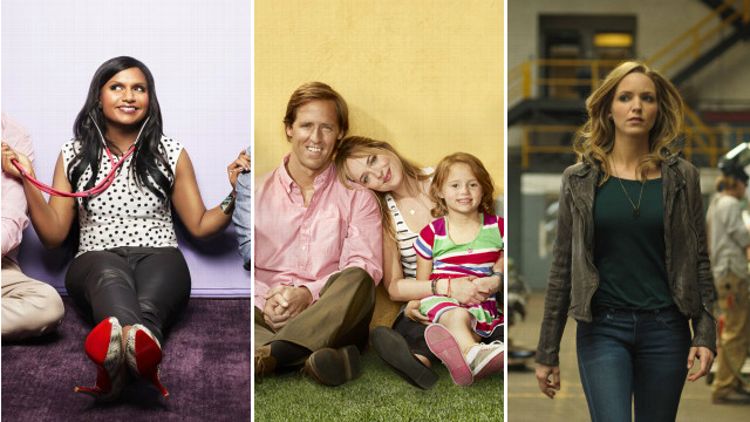 With Labor Day in the rearview mirror, it’s time to focus on the main business of the fall: school football television! All week, Grantland will be previewing the new TV season, one network at a time, and evaluating the first efforts of each incoming freshman. Leading off: Fox.

It’s been 26 years since Fox first burst onto the airwaves with a refreshing blast of salty language and embalming fluid. The network is now old enough to drink in a bar, rent an automobile, and even watch certain shows on CBS, yet it’s still considered some sort of punky upstart — the shorts-eating Bart Simpson of the stultifying and staid broadcast scene. (Never mind the fact that Bart himself could be in graduate school by now; one imagines an entire dissertation written on a chalkboard.) This reputation has stuck even as Fox has gone from striver to champion, winning the much-coveted 18-49 demographic in each of the last eight seasons. Those with nits to pick — or those like CBS with ratings to parse (the former Tiffany Network wins in total eyeballs nearly every year, even if the majority of those retinas are rheumy and cataract-ridden) — like to suggest that Fox’s Poochie-esque success with the kids is a product of its programming strategy: packing the schedule with tweet-friendly fare like American Idol (and, more recently, Idol’s boring replicant cousin, The X Factor) and consistent (and consistently cheap) cartoons like Family Guy and Glee. This may be true — even CBS would agree that hewing to an identity, even an age-specific one, is the first step toward long-term prosperity — but it’s also only part of the story. Fox isn’t on a roll because it chooses to play such a highly specific game. It’s because it’s playing by an entirely different set of rules.

Fox only programs 15 hours of prime time per week, an entire Top Chef: Masters marathon less than its competitors, who are saddled with 22. This means fewer opportunities for revenue, perhaps, but also considerably less risk. Fox’s schedule is trimmed even further each fall by its highly rated but oddly timed commitments to the NFL and the MLB playoffs, and again each spring with the return of the reeling-but-still-somehow-relevant Idol. Still, as even Bill Belichick would argue from his videodrome hidden just beneath the visiting team’s locker room, merely having an uneven playing field doesn’t mean you necessarily know what to do with it. In his five years in the big chair — lovingly crafted out of the bones of Rupert Murdoch’s enemies — entertainment president Kevin Reilly has been extremely smart about using the network’s collection of outsize programming events as a base, not an excuse. With less turf to defend, he’s able to focus on offense, and there’s no better example of this than Fox’s new Tuesday nights.

Last season, Reilly didn’t just unveil the best new sitcom on broadcast TV in New Girl, he also stabbed NBC in the back with a vintage, Etsy-purchased cocktail fork in the process: The Zooey Deschanel–fronted half-hour is exactly the sort of hipsterish giggle fest that, in happier days, the Peacock would use to feather its highly lucrative nest. Yet with NBC boss Bob Greenblatt spreading himself thin attempting to cover a weekly slate that is nothing but problem spots, Reilly used the opening to drink a competitor’s milkshake. Still not satisfied, this year Reilly’s bringing more straws, pairing New Girl with 2012’s best comedy pilot, The Mindy Project, a show that was developed by and for a pre-Greenblatt NBC. With the on-brand (but off-key) Ben & Kate and the returning, underappreciated Raising Hope, Fox now has a comedy night to rival any of its rivals. Like some sort of slick succubus, Reilly has built a strength out of the weakness of a reeling competitor. (A competitor, I might add, that unceremoniously fired Reilly in 2007. Revenge can be awfully adorkable.)

The commitment to The X Factor and Idol bifurcates Fox’s season into two halves and, again, Reilly has smartly steered into the swerve. The traditional network drama model of 22 episodes is dying, suitable only for sudsy soaps and pat procedurals. Last year, Reilly used the spring semester as a chance to launch Touch, a moderately successful Kiefer Sutherland empowerment hour that might otherwise have been lost in the swamps of fall. This year he’ll do the same with The Following, a legitimately terrifying serial-killer show from Kevin Williamson (Scream, the equally scary Dawson’s Creek) and starring James Purefoy as a sick psychopath and Kevin Bacon as the equally sick fed on his trail. Easily one of the top pilots of the year, it’s an intensely dark and risky show for the network, but exactly the sort of outsize swing needed to stay viable in an increasingly mature television landscape (translation: You can swear on cable). Reilly is clever to embrace his business’s big-event future in such a way; better to treat The Following as a happening, not another innocent lamb led to Purefoy’s gruesome slaughterhouse. (And does it help that The Following is likely to eat the brains of NBC’s hugely expensive Hannibal? Let’s put it this way: Even Clarice Starling could hear the screams coming from Universal Studios on this one.)

With The Following set for mid-season and returning security on nearly every night, Fox is debuting a scant three new shows this fall. No longer a punk, the youngest network is now a model of stability. The rest of the henhouse is on notice.

There are few better ways to encapsulate the comedic persona of Mindy Kaling, the multitalented multi-hyphenate, late of The Office, than the sight of a champagne-drunk singleton crashing a Huffy into a suburban pool while screaming “I’m Sandra Bullock!” That’s there, of course, early in the action of Kaling’s terribly titled, utterly winning new show. (It could have been worse: The working title for this comedy about an unlucky-in-love ob-gyn was It’s Messy.) But there’s also a great deal more, including surprisingly zippy chemistry between Kaling and her two Dr. Darcys, played by indie vet Chris Messina (the rough one) and British newcomer Ed Weeks (the one who looks like Hugh Grant in About a Boy, but acts like Hugh Grant in “real life”). Kaling is the rare writer and performer with a completely developed voice, Ivy League–educated but weaned on a steady diet of beauty magazines and rom-coms, and The Mindy Project is the rare pilot that immediately sells you on the series it could eventually become. Yes, Bill Hader and Ed Helms show up as a testament to Kaling’s deep Google Plus circles, but the real takeaway is Kaling herself; competence may be anathema to characters in front of the camera (as “Mindy Lahiri’s” drunk Louganis act proves), but it’s a huge relief for audiences to be able to rely on it behind the scenes. More than perfect companion scheduling for New Girl, Mindy has breakout potential all its own.

In addition to bolstering his suddenly surging comedy business, Kevin Reilly’s biggest remaining check mark for the fall was finding something to fill the shoes of House, a huge hit that managed to elevate the highly profitable “case of the week” format with kicky performances and compelling subject matter. By that metric — and, let’s be honest, nearly every other — The Mob Doctor fails rather grandly. Literalists will be pleased by the unambiguous nature of the title: Jordana Spiro (My Boys) stars as a deep-dish Chicagoan who grew up among organized crime but chose scrubs over thugs. But to pay off her brother’s gambling debts, she agreed to work off the clock for local mooks while striving to climb the ladder at a local hospital (and get horizontal with the woefully misused Zach Gilford, formerly Saracen on Friday Night Lights). There’s actually a good show lurking somewhere in this idea, but a network isn’t the place for it: The MD’s pilot ties itself in knots making Spiro’s morality anything but murky — she’s merely a victim of circumstance who’d rather be saving angelic African American kids — and the chaste goombahs spouting off about “trash pails” and brandishing pop guns pale in a post-Sopranos world. The creaky expository script doesn’t help much, either. “I realize you’re a plucky South Side girl who became a big-city doctor, but you are no better than anyone else here!” says a network note in full costume as a rival resident. Not even the scenery-chomping presence of William Forsythe — last seen as a kosher ham on Boardwalk Empire — can save this labored turkey.

UNSCIENTIFIC PREDICTION: In the ICU by Thanksgiving, whacked by Christmas.

Let’s start with the positive: If you record every episode of this comedy — from the fevered funny bone of Liz Meriwether’s fellow fempiricist Dana Fox — then you’ll be able to fast-forward directly to all of the bits featuring Lucy Punch as B.J., a bawdy British best frenemy who beasts every scene she’s in. Watching her draw “sexy” attention to her mouth with a pretzel and three straws (“super caszh, super subtle”) opposite the gamely wooden Dakota Johnson (the daughter of Don Johnson and Melanie Griffith, who stars as the titular Kate) is like revisiting Carmelo Anthony vs. the Nigerian Olympic team. The rest of the pilot finishes far from the podium, too awash with self-regarding cutesiness as Ben (recent Oscar winner Nat Faxon), a sweetly simpering man-child, both ruins and saves the life of his single-mom sister. With Faxon alternating between pratfalling and flop-sweating, and Punch marginalized, too much of the heavy lifting falls on the tiny arms of Maggie Elizabeth Jones as Kate’s precocious tyke; Ben & Kate aims for youthful exuberance but can’t get out of the kiddie pool.