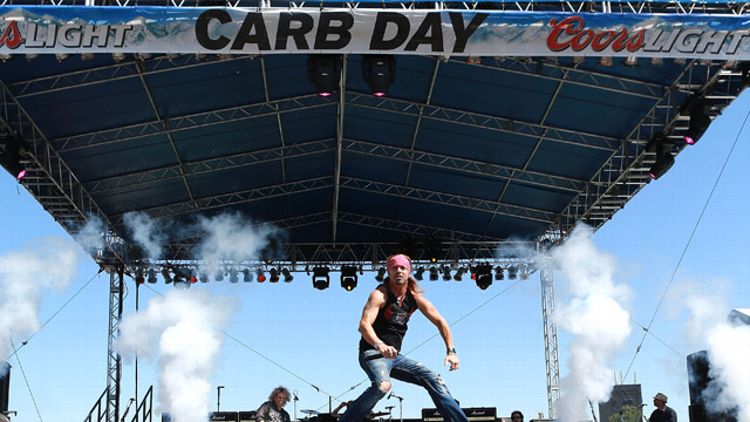 Welcome to Escape From Pop Purgatory, where we check out new music made by people who are more well known than 98 percent of the oppressively “cool” artists over whom the media obsesses, and yet are commonly perceived to be years past the point of their cultural relevance. (Pop Purgatory is fame plus time.) Because we’re unwilling to let albums released by established if unfashionable pop culture institutions come and go without a proper listen, we’re giving these damned souls a shot at redemption — or at least some much-needed publicity outside of their respective fan bubbles. In this installment, we look at Jammin’ With Friends, the latest LP from unskinny bopping hair-metal icon Bret Michaels.

Period of Peak Fame: 1986-90. As the lead singer of Poison, Bret Michaels released three consecutive multi-platinum albums during hair-metal’s inauspicious heyday: 1986’s Look What the Cat Dragged In, 1988’s Open Up and Say … Ahh!, and 1990’s Flesh & Blood. And he’s still eating off of those records, whether it’s as a nostalgia act on the road, as a reality star trading on his increasingly distant rock-star past, or a recording artist whose “new” albums merely repackage his old music in slightly different configurations — like on his latest release, Jammin’ With Friends.

What’s Happened Since: Poison was stranded in a sea of grunge after 1993’s Native Tongue, which was made without founding guitarist C.C. DeVille. The record stiffed and the original lineup of Poison didn’t reunite for another six years. In the meantime, Michaels moved on to the world of film, forming a production company with Charlie Sheen and writing, directing, and starring in 1998’s A Letter From Death Row, a movie (like death row or working with Charlie Sheen) that I haven’t experienced personally but I assume is brutal and dehumanizing. After that, there was Rock of Love. And another season of Rock of Love. And a season of Rock of Love Bus. Later, Michaels got brained by the scenery at the Tony Awards and won Celebrity Apprentice, in that order.

Where Are They Now: Here’s what apparently hasn’t happened all that much in the last decade for Bret Michaels: songwriting. Insanely padded at 20 tracks running nearly 80 minutes, Jammin’ With Friends not only relies heavily on rerecorded versions of old Poison hits like “Talk Dirty to Me” and “Every Rose Has Its Thorn,” but also on songs that appeared originally on Michaels’s solo records from as far back as 15 years ago. (The most likable cut on Jammin’, the self-mocking “Party Rock Band,” is taken from the Letter From Death Row soundtrack.) For years, Michaels has been playing this same shell game with his measly stockpile of material — on Jammin’ he revives his Miley Cyrus duet, “Nothing to Lose,” from three years ago, and switches personnel on his cover of “What I Got,” trading the members of Sublime (who appeared on 2010’s Custom Built) with the lead singer of Bowling for Soup, proving it is possible to make “What I Got” even less bearable.

Jammin’ With Friends exists only because Michaels assumes (cynically, if also correctly) that nobody has paid any attention to his other solo work up until now. (Or “now,” really.) It functions as a reboot — or, rather, as a brainstorming session for what a possible Bret Michaels reboot might be. Primarily, Jammin’ attempts to position Michaels as the latest “washed-up rocker guy goes country” singer. “Unskinny Bop” is awkwardly outfitted with banjos and slide guitars. On “Get Your Rock On” (and the nearly identical “Get Your Ride On,” which Michaels tells me via his track listing is the “AMA Supercross Theme”), Michaels tries to grab some of that Kid Rock country-rap steez, rasping out rhymes about “makin’ love on the beach to the break of dawn.” The path of Kid Rock is even more slavishly followed on the obligatory cover of “Sweet Home Alabama” and the “country version” of “Every Rose Has Its Thorn,” recorded with Brad Arnold of 3 Doors Down (?) and C-list country fellers Chris Cagle and Mark Wills. (Oddly, a second recording of “Rose” included on Jammin’ featuring Loretta Lynn is not the country version, which makes about as much sense as the redo of “Talk Dirty to Me” with Sugar Ray’s Mark McGrath and learned Rock and Roll Fantasy Camp counselor Scot Coogan.)

Representative Track: Michaels grounds Jammin’ With Friends in the zeitgeist of 2013 with one of its only true new tracks, “The App Song,” which references totally fresh and edgy phenomena like “Facebook” and “tweetin’” and “textin’.” Spoiler alert: Bret Michaels is against ’em.

Escape From Pop Purgatory: No. Though I might feel differently when I hear these same songs on the next Bret Michaels album.

What Kind of Stuff Should KITT Be Able to Do in This New 'Knight Rider' Reboot?