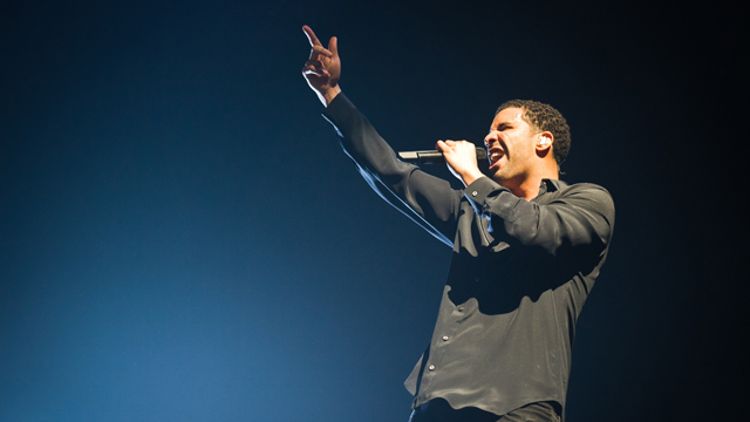 Two things I think about all the time: Drake and bar mitzvahs.

I think about Drake a great deal, because for about 18 months I’ve listened to his music nonstop but struggled over how I really feel about him as a like-aged guy. As for bar mitzvahs, I think about them on a weekly basis, longingly, because I miss the time in my life where I had multiple parties to attend, every weekend, for two years.

I bring up these two things because over the weekend, Drake released a bar mitzvah–themed video for his song, “HYFR (Hell Ya, Fucking Right).”

Before getting into the video, it’s worth noting that, for better or worse, I consider Drake a peer. Not once have I looked up to him, and his “celebrity” has yet to effectively register. We’re basically the same age and both have a few glaring strengths, but at the end of the day are completely riddled (I’m talking like Swiss cheese) with some of the predictable flaws of any 25-year-old man-child. It’s because of this that I feel no hesitation in being as critical of him as I would be of any other person my age who I want to see win, but who doesn’t seem to be living up to his potential.

Since he became popular and I learned of his background (a Canadian half-black/half-Jewish child star), I’ve wanted him to capitalize on this unique position he holds in the rap world. No one has as many traditional non-rap characteristics as Drake. Not even close. Always assuming that he was a smart guy and, more importantly, a self-aware guy, I’ve been waiting for him to do something that not only shows some real pride in his background, but also aids in the severely lacking dialogue with regard to “others” in the hip-hop arena. Yes, it’s a lot to ask of one guy, but hey, not everything can be Club Paradise.

My admiration for him as a musician has steadily increased, but up until recently, my view of him a peer with a platform has been anything but positive. While I’ve long wanted him to publicly embrace the mixed-ness that is Aubrey Drake Graham, I’ve understood why it might take some time. The way Drake has seemingly positioned himself in the public eye, and especially within the rap world, reminds me of the way many a mixed-race (or simply minority) kid struggles to socially navigate in high school and college: what to identify as, with whom to publicly hang out, with whom to privately hang out, how to dress, how to talk. While these questions remind me of my adolescent years, watching Drake, the adult, reminds me that even with a man of his fame, they can definitely still strike a chord.

Even though these facts about his background were never secrets, my assumption was that the goal for #TeamDrizzy was that over time we’d just think of him as a rapper on Young Money and/or Lil Wayne’s best friend and protégé. Maybe if he inundated us with “n***a” enough, we’d just see him as another rapper with melanin talking about money and women. To some, I believe that worked, but never for me. I’ve always wanted to him to be as publicly proud of all things Aubrey as I assumed he was privately.

But, as time went on and So Far Gone begat Thank Me Later, which begat Take Care, the Toronto thing slowly became a source of public pride. “All I care about is money and the city that I’m from,” the lyric from 2011’s “I’m on One” was Drake taking a step away from always talking about other areas (see: “Houstatlantavegas,” “November 18th”) and proudly taking the baton as the guy who unabashedly represents his Canadian hometown. While an essay could be written about how problematic that lyric is, the fact that he wanted to throw his hometown in your face was a baby step in the right direction.

And then a few weeks ago, in one of his performances, he debuted the “Wheelchair Jimmy” dance, finally coming to terms with the fact that, yes, he was Jimmy in Degrassi: The Next Generation. That was never a secret, but again, it was always as if time would make these things go away. No, Drake. Never. We know you got shot. We saw it.

And then the video that premiered Friday night.

Yes, the “Re-Bar Mitzvah” video is quite fantastic, but it’s so much bigger than that. This is a wildly symbolic and timely music video, with him referencing his original coming-of-age night as he goes through a second coming-of-age process. Coming to terms with who you really are, publicly, is a sign of adulthood, and with this video it’s apparent that his process of doing this is at the very least under way.

The fact that real Aubrey footage was used in this video, for one, is a sign that he’s ready to let us in. Instead of letting us assume what his younger days were like, he gave us footage of him saying “mazel tov” as a child while dancing around white kids with plastic fedoras on. As for the cast of characters in the video, regardless of whether they’re friends or actors, it seems like an accurate depiction of the crowd Aubrey would want at a celebration of his recommitment to his Jewish faith. Yes, the synagogue is filled with a congregation fit for a synagogue, with many donning yarmulkes, but there’s also Birdman and DJ Khaled paying respect. Does what he’s rapping about correspond with images of him reading his Torah portion alongside the rabbi? No. But that makes sense, seeing as that his life isn’t that cut-and-dried. Does Drake being lifted up in the chair, mid-“Hava Nagila,” while the “Hell Ya, Hell Ya, Hell Ya. Fucking Right, Fucking Right, All Right” chorus is blasting seem blasphemous? Sort of, but who cares? His world is a collision of cultures, so why pretend that any of them live in silos?

Seeing Drake smile from ear-to-ear and jump around isn’t a new thing, but it often feels forced and is usually accompanied with uncomfortable looks of toughness and choreographed fits of gesticulation. In this video, however, it all seems shockingly authentic. I’ve never seen him as happy, on-camera, as he is in these party scenes. The look on his face screams, “Finally, I can be myself.” I know the feeling, because I’ve been there. For me, regardless of the situation or community, the ultimate goal has always been to get to that point. It’s never immediate and often takes years, but once you’re at the point where impressing people is out the window and what people say about you doesn’t matter, you can finally be loose and let it all out. I say I can relate, because last week after three years in New York City, I finally got there. How did I know? I wore sweatpants to my birthday party. I lied and told a few people it was because I didn’t have time to change, but really it was because I finally felt comfortable being around this diverse crew of friends I had accumulated over the years. And nothing else mattered, so it was finally time to smile and just jump around.

This is the feeling I get from Aubrey Drake Graham after this video, even though it was in a shoot with cameras running. Maybe he’s that good of an actor and he’s fooling all of us, but I just don’t think that’s the case. It feels very, very real. I would say it’s about time, but that’s not fair, given that the majority of public figures never get there.

Jay-Z got there. Remember “Otis,” also known as the “Oh my God, Jay-Z is rich and can’t stop smiling” video? It was at that point I realized Jay was finally comfortable in his own skin. It was only a matter of time, though, for Jay. There’s no reason to mean-mug and talk about selling crack when you’ve got that much money, power, and Beyoncé. But for Drake it was something different. It was simply getting to the point where he felt confident enough to be himself. I didn’t think it’d ever happen, so I’m extremely glad he proved me wrong.

Do I think all the socially irresponsible lyrics, silly pouts, classic outfits, and emotions are going to now subside? Not one bit. But I wouldn’t want them to. I’m just glad I (along with many others) finally are allowed to connect with an artist that worked tirelessly for years to put up a wall. Maybe this wall was necessary to get to where he is now, but now that’s he’s “made it,” my hope is that more of the Drake walls keep tumbling down.

Why Not Watch Eight Minutes of the General Lee Jumping Over Stuff?