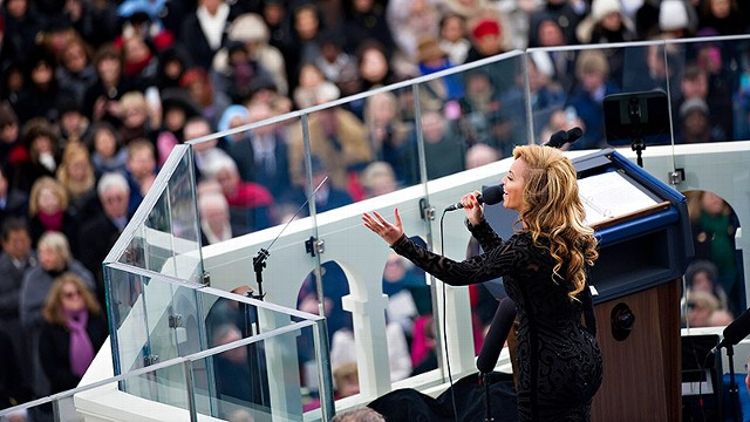 A sincere question: Did Beyoncé invent Twitter? What spell has the Queen B cast into the hearts of millions of tweeters, whereby the pure chaos of social media only comes into harmony to praise every little thing she does? Last year, I finally forgave Beyoncé for her myriad transgressions and admitted that my five-year fight against the B. Industrial Complex was borne mostly out of a contrarian spirit. Before my conversion, I struggled with the following questions: Why should Beyoncé eat so much while others had to nurse at the teat of VH1 Divas Live cameos? Why should she sing “At Last” at the first Obama inauguration, while a still-kicking Etta James had to snipe angrily from the sidelines? Why should she, beautiful, perfect cyborg, replace every fucked-up weave, every onstage meltdown, every blown-out Donna Summer high note?

But then I turned 30 and my life devolved into a series of Twitter updates, Flipboard browsing sessions, and American Idol recaps. I gave in to the B. Industrial Complex, may its shiny, nontoxic, and gloriously meaningless reign live on forever.

So when I turned on the presidential inauguration yesterday and watched Beyoncé walk up to the stage, I expected more of the same easy, fabulous agreement that comes with being a newly converted disciple. Yes, Beyoncé’s hair looked like it had been touched by the grace of a transcendental god, carrying all the golden and amber hues of the best of the Hudson River School. Yes, she is perhaps the most photogenic Diva to ever walk in front of a camera — if we send another capsule out to Alpha Centauri, it should carry a photo of Beyoncé, because any world that follows even the most rudimentary laws of symmetry will be able to appreciate her beauty. Yes, those earrings were the perfect green — the poet Wang Wei wrote 500 odes to jugs of wine and jade and the blue-green mountains of China, all in search for something as green as those earrings. And yes, her one Diva hand motion in an otherwise subdued performance was perfectly timed and revelatory. At “the bombs bursting in air,” Beyoncé reached into her ear and pulled out the monitor to show us, humble subjects, that your Queen wasn’t lip-synching.

And yet the vocal performance left me cold, as Beyoncé always does, and further highlighted her very real limitations. She just can’t quite seem to whip her singing voice into anything other than a self-evident, but mostly empty, vessel for her corporatized, perfect brand. After Beyoncé sings, the discussion is always about everything but the song itself. We stand in awe of Beyoncé as a thing, but her voice never stands alone as an object worthy of worship. She still hasn’t made anyone on the Diva Committee cry, and we cry regularly while watching Fantasia Barrino performances from the third season of American Idol. This second inauguration performance didn’t change a thing. We remain dry-eyed and skeptical.

Kelly Clarkson supports Ron Paul and votes Republican, and perhaps, in these polarizing political times, it made sense to trot the World’s Worst Breakup onto the stage to sing “My Country Tis of Thee.” Clarkson, at her core, is a church singer who, despite her “punky” catalog of hits, feels more at home when she’s singing some old song in front of some old audience. She sang respectfully and almost mournfully, and although “My Country Tis of Thee” is one of those unfortunate patriotic hymns that contain verses and movements that we’re mostly unfamiliar with, Clarkson somehow made everyone feel right at home, including the President, who seemed to be enjoying a rare moment of reflection during the performance. Perhaps the best compliment one can pay Clarkson is that she has gained enough popularity and respect to sing at the inauguration despite being a pretty average girl from Texas who has the audacity to spout off her political beliefs, as marginal and alienating as they may be. A decade after she won American Idol, Clarkson holds steady in the ranks of Diva royalty because people simply enjoy listening to her sing. And in a music/blogging landscape where a political stance simply means allying yourself with the political stances that most resemble a YouTube video about cute puppies, Clarkson is a breath of fresh air. The committee certainly understand the gilt appeal of Beyoncé (even if she’s a soulless creation, what a creation!), but we are a nostalgic crew who value the Zen concept wabi-sabi over perfection, no matter how beautiful, alluring, and media-friendly that perfection may be.

D'Angelo's Comeback Album Is '99% Done,' Says Person Who Is Not D'Angelo